This was the best quarter for solar installations in India ever 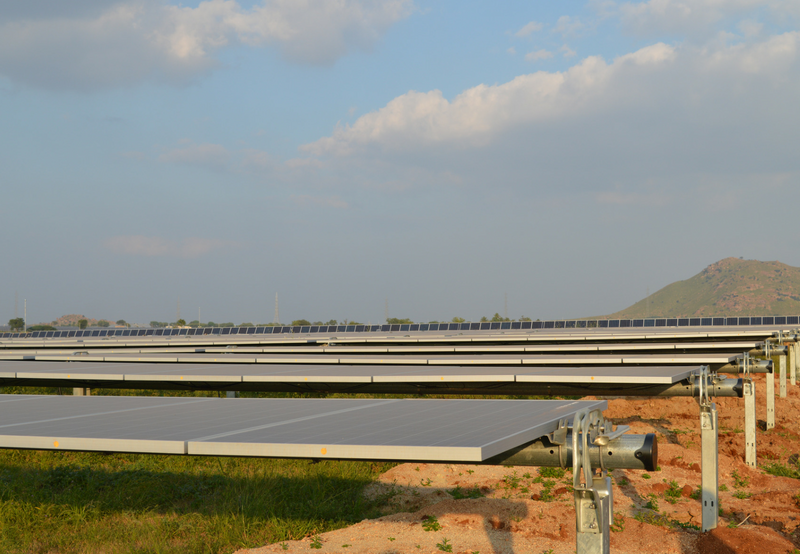 The record quarter was partly a result of project commissioning’s that were originally slated for Q4 2017 but could not be completed due to grid connection issues. The report found that installations rose by 34 percent compared to 2,448 MW installed in Q4 of 2017.

Mercom India Research is forecasting solar installations of approximately 8-9 GW in CY 2018 which is lower than 9.6 GW installed in 2017. The lower forecast is the result of a smaller pipeline of projects caused by uncertainty surrounding the safeguard duty and a slowdown in procurement by DISCOMs as higher module prices drove up auction bids.

“Even though Q1 was a record quarter, solar procurement activity has been muted over the last few quarters. But with an anticipated decline in module prices, we expect to see tariffs decline and distribution companies ramp up procurement activity,” commented Raj Prabhu, CEO and Co-Founder of Mercom Capital Group.

The large-scale solar project pipeline for India stands at 9.7 GW with 10.2 GW tendered and pending auction as of the end of Q1 2018.

The uncertainty around the trade case has put a freeze on development activity and needs to be resolved immediately. The industry needs clarity on the safeguard duty to understand how it will be imposed and at what levels. Even with the announcement of the pass-through provision, concerns remain, and the industry wants a step-by-step implementation plan on paper with proper approvals.

The withdrawal of the anti-dumping petition was welcomed by many developers and EPCs, but the Indian Solar Manufacturers Association (ISMA) said that it intends to refile the case with new data. There is speculation that the case may be withdrawn if a satisfactory level of safeguard duty is imposed.

Issues relating to the Goods and Services Tax (GST) are cropping up again in some states, while custom duty issues at ports are now mostly resolved. As the adoption of solar continues to rise, multiple states have started to implement deviation charges on wind and solar projects for over and under generation of power. 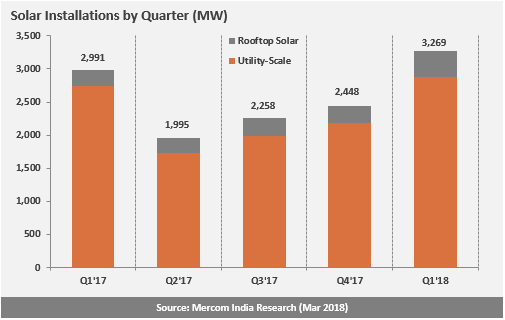 The Q1 India Solar Market Update found that rooftop solar has been growing at a healthy pace but is very dependent on government tenders and projects. Open access projects were really sought after, but slowly states are making them less attractive by levying wheeling and banking charges. Residential solar is still untapped as financing and upfront costs continue to be big challenges. Government subsidies are not getting paid on time, affecting small installers.

On the bright side, solar module average selling prices (ASPs) began to decline in Q1 2018 after two consecutive quarters of increasing prices. The safeguard duty threat and rising module prices were the biggest challenges in the second half of 2017 and with module prices trending down we can expect procurement activity to pick up.

In other developments that are expected to positively affect the Indian solar industry, the Chinese government made a new policy announcement imposing installation caps and reducing feed-in-tariffs (FiTs) to essentially slowdown solar installations in China amid ballooning solar subsidy deficits. China was the biggest solar market in the world in 2017 with annual solar installations of 53 GW, a majority of them coming from distributed generation (DG) projects. The government now wants to impose a 10 GW cap on DG projects essentially putting the brakes on installations, which may result in a 20 GW decline year-over-year. This could mean a massive oversupply situation, which means an impending crash in solar module prices worldwide, including India.

This creates an optimistic scenario for Indian solar developers who could begin to bid lower, which in turn could open the auction floodgates as states jump in to lock in low tariffs.

“It now comes down to how the safeguard duty will be handled. Will the government apply a low tariff which could be easily absorbed by the industry as Chinese module prices decline or will trade cases drag on continuing to create uncertainty in the near future? There is a clear opening for the government right now to use this opportunity to lay the path for growth. Overall, things are looking much brighter for the Indian solar industry going into the second half of 2018,” added Prabhu.

Sampath has been part of the Mercom India research and news team since the company’s inception. He currently oversees all data and research relating to news published on the MercomIndia.com platform. Sampath received his Bachelor’s of Commerce Degree from Kuvempu University and Post Graduate Diploma in Management, from Indira Gandhi National Open University. More articles from Sampath Krishna.

Sampath has been part of the Mercom India research and news team since the company’s inception. He currently oversees all data and research relating to news published on the MercomIndia.com platform. Sampath received his Bachelor’s of Commerce Degree from Kuvempu University and Post Graduate Diploma in Management, from Indira Gandhi National Open University. More articles from Sampath Krishna.