The cumulative solar installed capacity totaled 22.8 GW at the end of Q1 2018.

Q1 2018 was the best quarter on record for solar installations in India, with 3,269 MW, a 34 percent increase compared to 2,448 MW installed in Q4 2017. Installations were also up when compared to the 2,991 MW installed in Q1 of 2017. The cumulative solar installed capacity totaled 22.8 GW at the end of Q1 2018. The surge in installations in Q1 2018 was primarily due to the completion of projects which were scheduled for commissioning the previous quarter but had experienced delays due to grid connection issues.

This was the first quarter of over 3 GW installed in the Indian solar market. This was the fifth quarter in a row where at least two gigawatts of solar was installed. 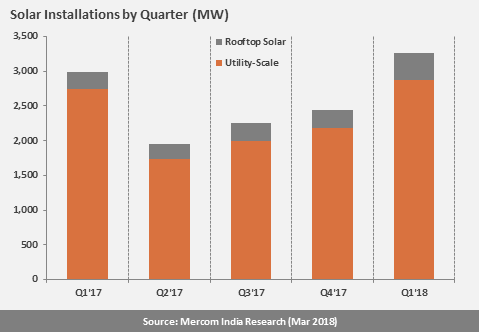 The large-scale solar project pipeline for India stands at 9.7 GW with 10.2 GW tendered and pending auction as of the end of Q1 2018.

The uncertainty around the trade cases has put a freeze on development activity and needs to be resolved immediately. The industry needs clarity on the safeguard duty to understand how it will be imposed and at what levels. Even with the announcement of the pass-through provision, concerns remain and the industry wants a step-by-step implementation plan on paper with proper approvals.

Mercom is forecasting approximately 8–9 GW of solar to be installed in the calendar year (CY) 2018. Uncertainty in the solar industry created by the announcement of trade cases led to a smaller development pipeline with slowing tender activity, leading to a lower installation year compared to 2017.