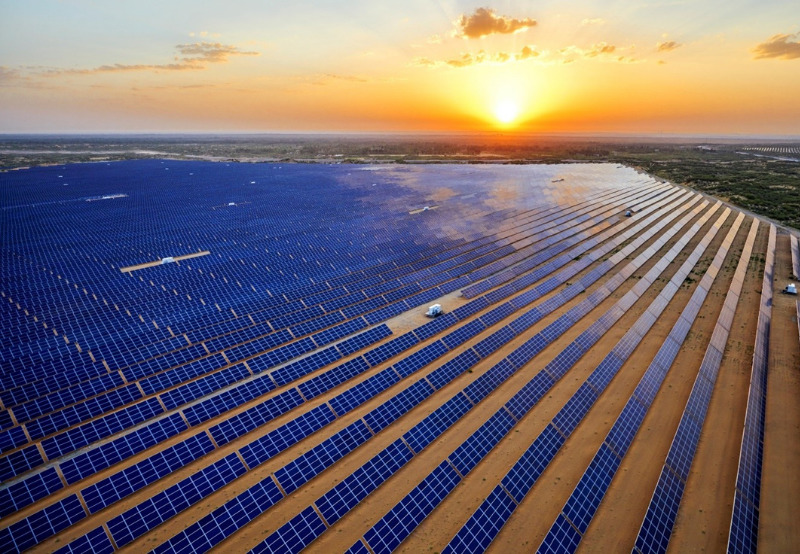 On June 30, 2021, Mercom hosted a webinar on the ‘State of the Indian Solar Market – Addressing Major Shifts in the Industry and the Path Forward’.

The focus of the discussion was on the performance of the market in the first quarter of the year and the outlook for the rest of the year. The webinar also touched on some of the important policies and analyzed how they could affect the market going forward. 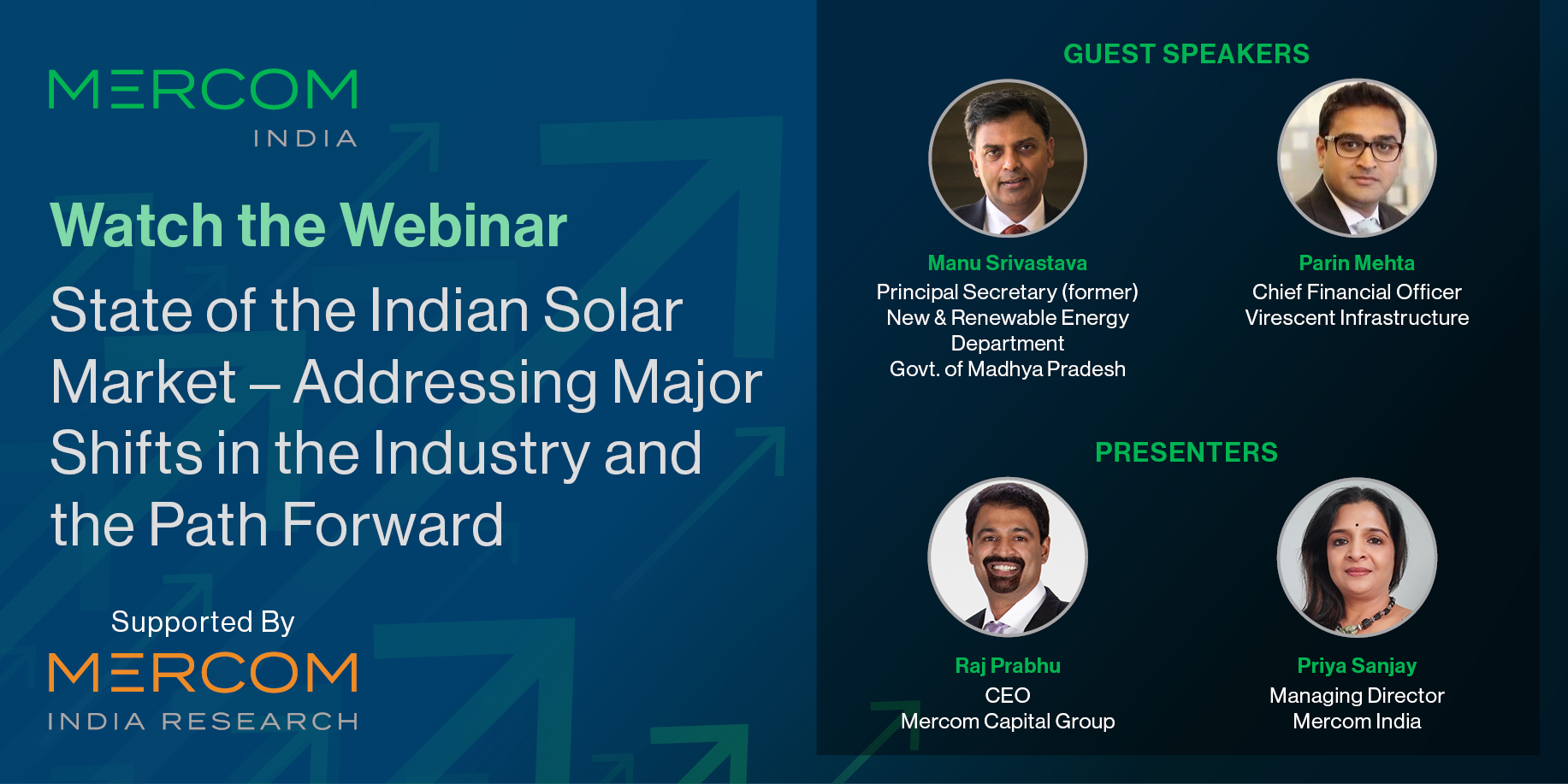 Impact of Covid-19 on the solar sector

Speaking on the impact of Covid-19 on the Indian solar industry over the last year, Manu Srivastava said, “The Covid-19 pandemic has driven home the point that sustainability is the only way to preserve the environment. In this context, renewables acquire more relevance. In the current situation, most countries are cashed out, as health has taken priority. At this juncture, we need to involve the private sector. There is no dearth of private equity in the market, and it is possible to set up solar projects without investment from the government or consumers. Right projects and right policy implementation can make this possible.”

Recently, the tenders floated by Rewa Ultra Mega Solar Limited (RUMSL) received an overwhelming response from the bidders. The tender for 450 MW of solar projects at the Shajapur Solar Park in Madhya Pradesh was oversubscribed by 5.8 GW.

Earlier, RUMSL’s tender for 550 MW of solar projects at the Agar Solar Park in Madhya Pradesh also received a good response. A total of 18 bidders were shortlisted for the tender, including 15 Indian and three foreign developers.

Sharing his views on the success of the RUMSL’s tender, Srivastava added, “Our main aim is to offer contractual arrangements that reduced the risks and mitigated the projects’ uncertainty. We put ourselves in the bidders’ shoes, addressed their concerns, and assured them of guaranteed off-take. We ensured payment security. We also addressed other issues like ‘Change in Law,’ comfortable timelines, part-commissioning. These were just some of the issues that we addressed in the RUMSL tender.”

Ailing health of DISCOMS and the way out

Another topic that came up for discussion during the webinar was the financial health of DISCOMs and their reluctance to procure power, which has impeded the solar developers. As of April 2021, the DISCOMs owed renewable generators ₹113.34 billion (~$1.56 billion), excluding disputed amounts in overdue payments across 200 pending invoices.

Speaking on the plight of the DISCOMs, Srivastava shared, “We have to understand that the DISCOMs are under stress. They have existing power purchase agreements (PPAs) with thermal projects, and they have to pay the fixed cost. We should look at DISCOMs willing to procure power and reach out to them. Industrial growth has stagnated in the past few years due to various reasons. The power demand needs to increase only then DISCOMs can take care of the fixed cost and sign new contracts. Cooking and transport are two areas where the power demand can come by, and the government needs to consider this.”

Mergers and acquisitions set to rise in future

Solar projects have been considered an ‘investment haven’ in the uncertain Covid-19 world because of the steady returns they provide with minimal risk. Before acquiring any projects, the most important aspects to be considered are the asset and team quality, business ethics, and governance status. The panelists discussed the mergers and acquisitions (M&A) scene in India and what the future holds going forward.

Speaking on the M&A environment in the country, Parin Mehta opined, “The renewable energy sector in the last few years has become a lucrative segment for various institutional investors. The long-term cash flow attracts several investors to invest in the renewable sector, and the Indian solar sector is a big market for investors. When we go for any acquisition, we look at the credibility of off-takers, and guaranteed off-take of energy is a very crucial aspect of the process. The project size and the tariff profile are very important for us. We also look for the quality of operational assets and the profile of the seller.”

“I think that the M&A activity has been robust in the past few years in India. In the last few months, renewable has become a non-core segment for some developers because of the Covid-19 situation, and they would want to sell their assets and exit the market. In the long-term, we’ll see a lot of M&A activity taking place in the sector, and things are looking good right now,” he added.

Sharing his views on the regulatory uncertainty and the need for continuity in policy implementation, Mehta said that regulatory certainty was the need of the hour. It included clarity regarding safeguard duty, implementation of the basic customs duty (BCD), and the signing of PPAs within the agreed timeline.

“Currently, bidders are required to own 51% of the participating company at the bidding stage. If we can ease this requirement and involve the investors during the bidding process, it would be helpful and encourage the M&A activity. The cost of debt has also fallen in the past few years, and it is quite low right now, which has helped. The developer should look at developing good assets that can last the full term of 25 years. Returns are not very important, but risks should be mitigated, and the assets should last their lifetime,” he added.

What the future holds

Speaking on the forecast for the year, Prabhu said, “The price of modules has been on the rise for the past four quarters in a row. This is a new trend, and the developers need to keep this in mind as they plan for the year. This trend is likely to continue for the rest of the year. The cost of solar systems has also increased for three quarters in a row. Another key happening is the increase in tariff after the record lows of last year, which saw tariffs breach the ₹2 (~$0.027)/kWh mark. The tariffs have also shown a gradual increase because of the factoring in of the system components costs. The tariffs are not going to drop any further with the BCD coming into effect next year.”

“Three forecast scenarios could be predicted for the year, which started on a positive note but was disrupted by the second wave of the pandemic. For 2021, in the best-case scenario, we’ll have installations in the range of 8 GW-9 GW, which was initially projected to be around 11 GW which is highly unlikely. In the moderate situation, the solar installations will be around 7 GW. In the worst-case scenario, we’ll have 6 GW of solar installations this year, which will still be higher than the dismal number of 3.2 GW last year,” Prabhu added.

You can view the webinar here.