Reasons Behind the Record Low Solar Bid of ₹1.99/kWh in the Gujarat Solar Auction

Good ratings of Gujarat DISCOMs, detailed and clear tender documents, and offtake guarantee are some of the key reasons for the low tariff 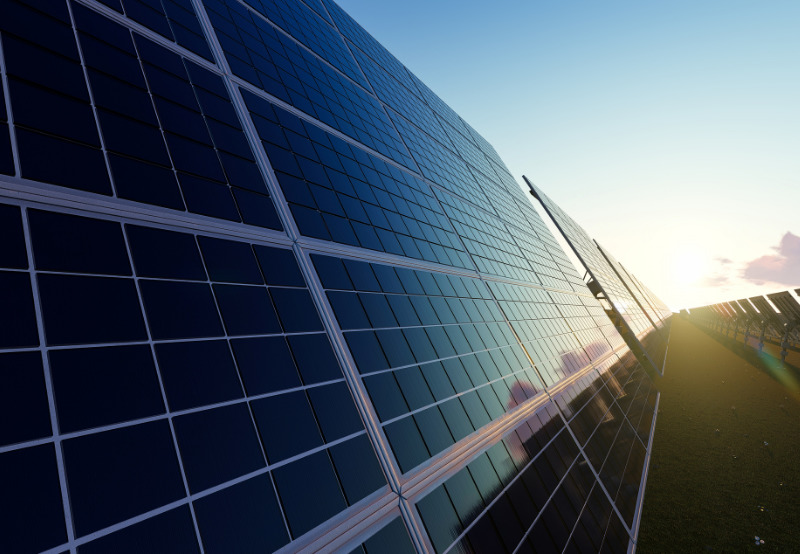 The recent auction by Gujarat Urja Vikas Nigam Limited (GUVNL) (Phase XI) for 500 MW of solar projects set a new record for the lowest tariff an auction in India of ₹1.99 (~$0.0269)/kWh.

The tender was floated in September by GUVNL for 500 MW of power from grid-connected solar projects.

The new record came close on the heels of the previous record of ₹2 (~$0.0270)/kWh tariff quoted by Al Jomaih Energy and Water Company and Green Infra Wind Energy Limited, a subsidiary of Sembcorp, for 200 MW and 400 MW of solar projects, respectively. This auction was held by Solar Energy Corporation of India (SECI) for 1,070 MW of solar projects in Rajasthan (Tranche-III). SECI had received bids from 14 companies for a total of 4,350 MW, leaving the tender oversubscribed by 3,280 MW.

Reasons for Dip in Tariff

A GUVNL official told  Mercom, “The ‘change in law’ will protect developers from upcoming basic customs duty (BCD). By the time they procure modules for the project, the safeguard duty will be over. It is also one of the reasons for such a low bid.”

For NTPC Limited, this was an opportunity to expand its base and make its presence more noticeable in Gujarat. For Al Jomaih, it was another reason to celebrate, after its success in SECI’s 1,070 MW auction.

Ravi Khanna, MD of Aditya Birla Renewables, said, “The valuation in this tender is what makes a case for the low tariff quoted. It is a bid for pure solar project development. The Gujarat distribution companies (DISCOMs), who are the off-takers, all have AAA ratings. Above all, there is no uncertainty of signing power sale agreements (PSAs). We are a large group, and our economics are good, and we see value in the tariff we have quoted.”The high credit rating of the Gujarat DISCOMs coupled with the anticipated drop in module prices and a general sense of policy stability in the state seems to have been the main reasons for the bid breaching the ₹2 (~$0.0270)/kWh mark.

“The drop in tariff can be attributed to many things, and the good credit ratings of Gujarat DISCOMs is one of them. The fall in module prices is another. Gujarat being our home turf and a renewable-friendly state was also one of the reasons why we bid for the project,” said one of the participants in the tender.

Mercom, in a recent analysis, concluded that one of the biggest challenges solar project developers currently face in India is long delays in signing the PSAs with DISCOMs.

2020 has witnessed a continuous decline in solar tariffs. In July this year, solar power tariffs had dropped to a low of ₹2.36 (~$0.032)/kWh in an auction held by SECI. The auction was conducted for 2 GW of the interstate transmission system (ISTS) connected solar projects (Tranche IX). The lowest tariff was quoted by Solarpack India, Avikaran Surya India (Enel Green Power), Amp Energy Green, and Eden Renewables. 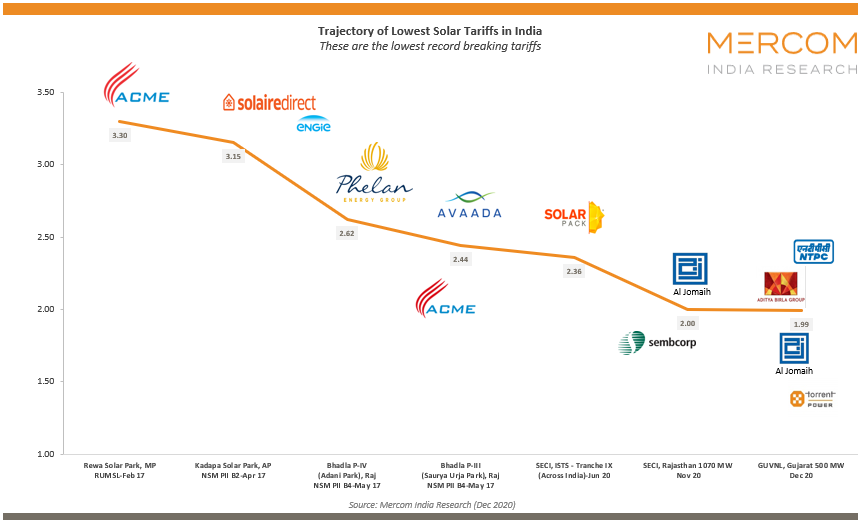 Many stakeholders believe that the drop in tariffs is because of state-specific policies and favorable tender specifications. The choice given to the bidders to select the project sites also seems to have played its part in bringing down the tariff in the GUVNL auction.

“This time, GUVNL worked seriously on the tender. We consulted various stakeholders and our EPC contractors and asked for suggestions on how to bid competitively. GUVNL mentioned everything clearly in the tender document regarding ‘change in law,’ transmission of power, and guaranteed offtake. We don’t see this in other tenders. We felt that the environment is right in the state, and there are no central bids at present, which also played a part in bids being aggressive,” noted another participant.

“Compared to Rajasthan, Gujarat doesn’t charge anything extra. Earlier in Gujarat, the auctions were mainly related to solar parks, and the developers didn’t have the option of selecting the project sites. This is the first time GUVNL has given such a choice. Gujarat is a tough place in terms of terrain for solar projects. The freedom to select the locations is a good experiment. If the bid were for  Raghanesda or Dholera solar parks, the tariffs would not have been so low,” he added.

According to one of the bid winners, to achieve greater generation efficiency, bifacial, or monocrystalline solar modules with half-cut or triple-cut will be used for these projects.

“Though the tariffs are trending really low, it may not be replicable as parameters vary from auction to auction. However, if the PSA and offtake are guaranteed, the tender is structured to remove uncertainties and allow flexibility for developers, there could be room for tariffs to come down in other auctions as well,” said Raj Prabhu, CEO of Mercom Capital Group.