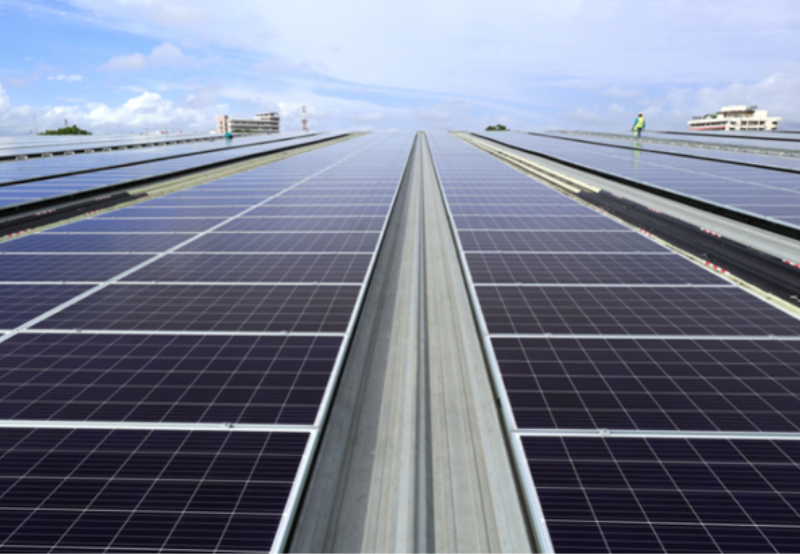 In a new three-year collaborative study between the Wales-based Swansea University and Tata Steel U.K., researchers found that perovskite solar panels can be printed on steel atop establishments using screen printing which allows direct deployment of solar on the surface rather than using any other base.

The rooftop solar would enable buildings to generate, store and release their own secure supply of electricity. This would reduce reliance on fossil fuel energy such as gas, and ease pressure on the National Grid, especially as surplus power generated by a building can be used to charge up electric vehicles.

Active Building is a concept pioneered by the UK-based Innovation and Knowledge Centre SPECIFIC which designed and has built offices and classrooms with Active solar systems. An Active solar system-enabled building supports a wider grid network by smartly integrating renewable energy technologies to generate, store, and release heat and electricity.

Swansea University already has two operational Active Buildings on its campus for the past few years. The results encouraged the collaboration to explore the potential of this technology further and speed up the process of turning the Active solar system into products for industrial-scale manufacturing.

Head of materials science and engineering at Swansea University Dave Worsley said, “We know the concept works as we’ve demonstrated it in our Active Buildings in sunny Swansea. This new collaboration with Tata Steel will enable us to develop its potential more quickly, identifying new types of steel products that actively work to generate electricity.”

“These printable solar cells can be built into the fabric of our homes, shops, and offices, allowing them to generate the power they need. It would also ease the pressure on national electricity networks, for example by enabling us to charge up electric vehicles with surplus energy generated by our homes,” he said.

Tata Steel UK’s R&D Director Sumitesh Das said, “The combination of a ‘green’ solar technology with steel is a significant step in our net zero ambitions. We are buoyant with the possibilities that the perovskite technology brings to the table – especially in integration to the building and construction solutions – across different value streams in Tata Steel.”

Conventional solar cells manufactured from crystalline silicon consume ample energy during the production phase, while they are heavier than perovskite solar cells (PSCs) that can be produced utilizing locally available materials. The manufacturing process of solar panels using PSCs emits less than half the carbon compared to traditional solar cells.

Crucially, another advantage of PSCs over silicon is that they are flexible rather than rigid. This means they can be printed, using techniques such as screen printing, directly onto a material such as coated steel. This opens the door to creating innovative steel products for use in the construction industry that have built-in solar generating technology.

Perovskite solar cells offer a vast scope for researchers worldwide to study its implementation in solar panels to capture the solar spectrum to generate and store energy. Experts are also conducting experiments to understand certain criteria that lead to low performance in PSCs.

One such research was initiated by researchers at the Centre for Solar Energy and Hydrogen Research in Baden-Württemberg (ZSW), Germany who coated a large area of PSCs with a green solvent dimethyl sulfoxide (DMSO) and achieved a power conversion efficiency of 16.7%.