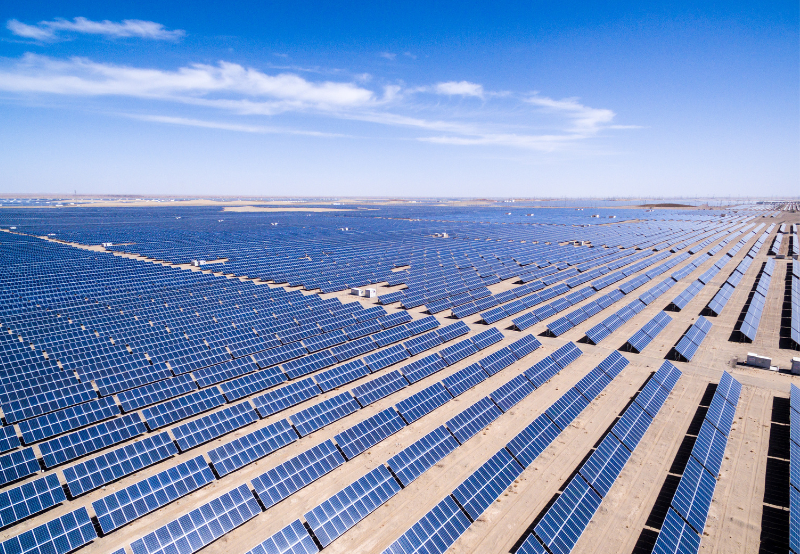 India has set a lofty target of 280 GW of solar capacity by 2030. Achieving the target appears daunting, going by the progress made so far.

Solar project development activity suffered during the initial stages of the pandemic, with 2020 ending up as one of the worst years for the sector. However, after lockdowns were eased, the industry bounced back despite supply chain challenges. 2021 was the best year for solar to date in India. According to Mercom Research, solar installations in 2022 are expected to surpass last year.

Recently India surpassed the 50 GW milestone, which comprised 43 GW of utility-scale solar and 7 GW of rooftop solar. As of May 2022, the country was just 14 GW away from reaching the 60 GW large-scale solar target set for 2022.

Solar parks come with land, infrastructure, and guaranteed offtake. They are attractive to developers as they save on the long government approval processes.

While individual solar projects require significant time for site development and a transmission system for power evacuation, developers get these benefits fully ready in the solar parks. They can establish their projects under a plug-and-play model.

The solar parks developed so far have elicited mostly positive responses from developers except in cases where park fees have been prohibitive. Foreign investors keen on avoiding legal hassles and uncertainty have preferred to invest in projects developed in solar parks.

Andhra Pradesh, Rajasthan, Karnataka, and Madhya Pradesh are among the states leading the way in adding solar capacity by setting up solar parks.

Speaking on the current status of solar parks in the country, a senior official from the Ministry of New and Renewable Energy (MNRE) said, ” Earlier, solar parks were being developed as no large projects were coming up. But things have changed, and we have big projects across the country. Initially, 20 GW capacity of solar parks was planned in 2014, which was enhanced to 40 GW in 2017. We have approved 61 solar parks for the full capacity of 40 GW, and most of the solar parks are under development.” Of the 40 GW, 10 GW is commissioned.

Speaking in Rajya Sabha in April, Union Power Minister R.K. Singh had said that central financial assistance of up to ₹2.5 million (~$31,964) for the preparation of the detailed project report and ₹2 million (~$25,571)/MW or 30% of the project cost, whichever is lower, will be provided for the development of such parks under the program.

Sharing his views on the development of solar parks, a top executive from one of the leading renewable developers said, “I think the factor that makes solar parks an attractive proposition for project developers is the acquisition of land. Also, the developers don’t face any legal challenges regarding land acquisition. So, given an option, any developer would still prefer solar parks. The variables are very limited in solar parks, making it an economically feasible option. ”

Commenting on the economic feasibility of solar parks, a top executive from Sunsure Energy said, “Considering that land acquisition and connectivity are big issues for any developer, solar parks offer them a good option. They can install the project through an engineering, procurement, and construction (EPC) vendor and easily get power. It is a win-win situation for solar generators and a perfect option for commercial and industrial (C&I) consumers.”

“Solar parks are essential in achieving the solar targets, but it is not the only option. There is also the option where you can develop solar projects connected to the interstate transmission system (ISTS) network across the country. The Solar Energy Corporation of India (SECI) has come up with this option, and it gives the flexibility to develop projects anywhere in the country. Tariffs are lower in solar parks compared to individual projects. In solar parks, the risks are reduced, and you have a guaranteed offtaker, making it an economically viable option for developers,” he added.

Ritu Lal of Amplus Solar sounded a note of concern about the scarcity of land. She suggested that an increased focus on promoting rooftop solar could complement the growth in utility-scale projects.

Per capita land availability is very low in India, she said, suggesting making available land and water connectivity near substations to install grids.

On the importance of solar parks and Madhya Pradesh being a preferred destination for such parks, a top official from Rewa Ultra Mega Solar Limited (RUMSL) said, “The scale of solar parks makes a difference to the overall cost of a project. They are a sound and economically viable option for developers. We have achieved 50 GW solar capacity in the country and need more solar parks to scale up the total installed capacity.”

“We are developing the 1,400 MW Chhatarpur Solar Park, a hybrid solar park with storage projects. We are also working on the Morena Solar Park with a capacity of 1,400 MW,” he added.

The official agreed with Lal about the importance of making available land for solar parks.

Another big challenge in developing solar parks is the availability of the interstate transmission system (ISTS) network.

“There are times when there is a mismatch between the availability of the ISTS network and project development. It is a big impediment to the development of solar parks in the country,” he said.

Can floating solar be an alternative? States like Madhya Pradesh have looked at it.

Floating solar parks can be set up on reservoirs, canals, and other water bodies. They can avoid the need to acquire large tracts of land. “Floating solar is a good option but costs nearly 25% higher than ground-mounted solar projects. Floaters depend on petroleum products, which are at an all-time high, thus making floating solar a costly affair,” the official noted.

Highlighting the challenges developers face, the renewable energy developer noted, “SECI is the nodal agency that floats the tenders, and the development of solar parks is the responsibility of the state nodal agency. SECI has no control over it. The tie-ups need to be very clear.”

“Solar parks announce various benefits that are not delivered. The Anantapur Solar Park has been operational for two years, and water is not provided for many project developers. Approvals take time, and no single entity is accountable and answerable to the project developers. Acquiring land in India has never been easy. In Rajasthan, there is plenty of revenue land, but it is not given to solar parks. Solar parks are still an attractive proposition despite all these factors,” he opined.

Commenting on the challenges solar park developers face, the MNRE official said, “One of the main hurdles in developing a solar park is land acquisition. Also, matching the timelines of the projects being developed in the parks with that of the transmission network for the evacuation of power is a big challenge. Large tracts of land in a single location are scarce, and land acquisition takes time. Unlike private project developers, government agencies have limitations in dealing with these situations.”

The rise of private solar parks

India installed 513 MW of open access solar in Q1 2022, a 58% growth quarter-over-quarter (QoQ). The development pipeline at the end of the quarter was 2 GW.

“Utility-scale projects are the driving force behind the growth in the Indian solar sector. The country needs a well thought out plan to address land and infrastructure issues and remove the hurdles that could slow the 280 GW large-scale solar set by the government. A new and improved version of solar parks that keeps costs down, removes red tape, and makes large-scale project development as frictionless as possible could be one of the solutions,” said Raj Prabhu, CEO of Mercom Capital Group.