The new renewable energy policy will be valid until 2027 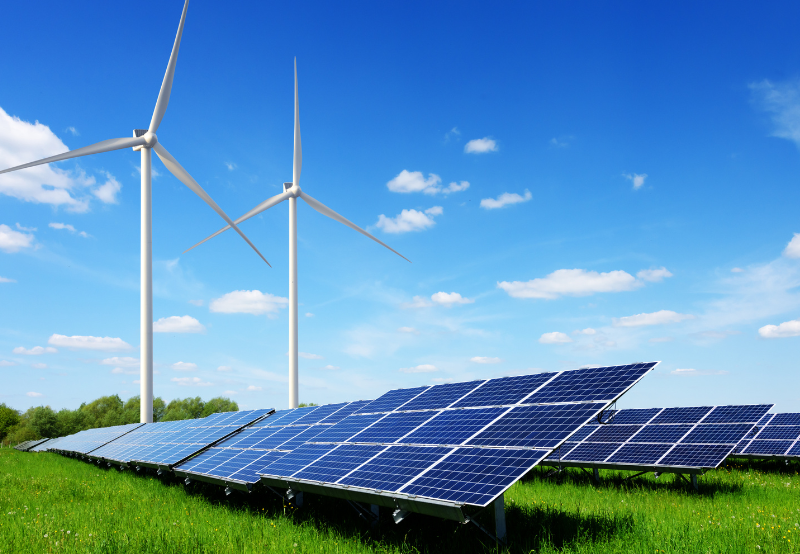 The Government of Karnataka has announced the new ‘Karnataka Renewable Energy Policy,’ which will be valid for the 2022-2027 period. The policy aims to project Karnataka as a preferred investment destination for renewables and create an ecosystem for sustainable and green energy development.

The state aims to develop 10 GW of additional renewable projects, with or without energy storage systems and 1 GW of rooftop solar installations in the next five years.

Karnataka is one of the leading states with nearly 15.91 GW of installed renewable energy capacity as of March 2022, according to Mercom’s India Solar Project  Tracker.

Karnataka is also home to one of the largest solar parks – Pavagada Solar Park, which has an operational capacity of 2,050 MW.

The Ministry of New and Renewable Energy (MNRE) has already identified sites for park development in Karnataka at Chitradurga, Davangere, and Ballari, with a cumulative development potential of 11.07 GW.

Solar projects with a minimum capacity of 1 MW will be considered MW-scale grid-connected solar projects. The project developer will be allowed to develop MW-scale solar projects through the open access route for the sale of energy in the state.

The project developer will be allowed to set up off-grid solar projects within their premises after informing the electricity supply companies (ESCOMs).

If the solar project is set up within the premises of a consumer which is connected to the grid interface of the ESCOMs or the Karnataka Power Transmission Corporation Limited (KPTCL), the developer will have to pay the grid support charges and other charges as determined by the Karnataka Electricity Regulatory Commission (KERC).

The net metering facility will not be available for projects under this category that are connected to the grid interface of ESCOMs or KPTCL.

Karnataka will promote grid-connected rooftop solar systems on public and residential buildings, commercial and industrial establishments, and others through net metering and gross metering arrangements per the KERC Regulations, 2016 to meet the target of 1 GW.

The government aims to promote floating solar projects on existing dams, reservoirs, and other water bodies. The state will allocate the water body on a long-term lease or rental basis to develop projects under the intrastate transmission system (InSTS) or ISTS programs.

As of December 2021, the installed wind energy capacity in the state stood at 5.1 GW. To tap the wind energy opportunities in the state, the policy aims to develop new wind energy projects and repower existing projects.

The selection of projects under the InSTS category will be through a competitive bidding process as per the requirements of the ESCOMs to fulfill their RPO targets fixed by KERC.

The selection of projects under the ISTS category will be through a competitive bidding process conducted by intermediaries such as the Solar Energy Corporation of India (SECI) and NTPC. The project developer can also develop projects under the open access route for the sale of energy outside Karnataka according to the guidelines issued from time to time.

To tap the wind-solar hybrid energy opportunities in the state and cater to the demand for low cost and higher availability of renewable energy, the policy will focus on developing wind-solar hybrid markets like the hybridization of existing projects and developing new hybrid projects.

The open access charges for wind-solar hybrid projects in the state will be as per KERC regulations.

In the case of hybridization of existing projects by either addition of wind or solar energy, the additional energy from such projects may be purchased by ESCOMs at the tariff discovered thorugh competitive bidding.

The state aims to develop energy storage projects, including pumped hydro storage, to integrate more renewable energy into the grid. This will help in peak reduction, managing curtailment, intraday and seasonal variations, and meeting the increasing power demand of the state through renewable energy.

The energy storage service providers can tie up with renewable developers or utilize any energy source to store the energy. The stored energy can be sold to ESCOMs, procurers, or open access consumers within Karnataka or outside Karnataka.

The available open access charges for energy use from the energy storage services in the state will be as per KERC regulations.

The government will also provide support for the development of biomass projects and co-generation projects in the state.

The developer of the co-generation projects will be allowed to use the power for captive use or sale in power exchange or third-party sale within and outside Karnataka.

To promote InSTS and ISTS category projects, the project developers can sell energy to ESCOMs, procurers, intermediaries, or consumers under open access, both within Karnataka and outside the state. The project developer may also set up projects under the renewable energy certificate mechanism in compliance with the Central Electricity Regulatory Commission’s (CERC) Regulations, 2010.

It will be the responsibility of the renewable energy developer to acquire or lease the land required for project development.

For the use of ISTS by the developer, the applicable transmission charges and losses will be determined by CERC. There will be no banking facility for renewable projects implemented under the ISTS category.

The project developers should comply with the CERC regulations on forecasting, scheduling, and deviation settlement for LTA, MTA, and STA.

Projects connected to CTU through STU

The project developer will be allowed to connect to the nearest available STU substation to connect with the CTU under the ISTS category projects.

Karnataka will encourage private sector investments and public-private partnerships under this policy for developing renewable energy parks. The state will promote the development of the green energy corridor projects as per state and central government guidelines.

The government aims to promote the development of renewable energy parks, with or without storage in the state. The minimum capacity for the solar park will be 25 MW, and the maximum capacity will be determined as per the guidelines of MNRE.

The timeline for the development of renewable projects under captive, group captive, and third-party sale (both within and outside renewable energy parks) is mentioned below: 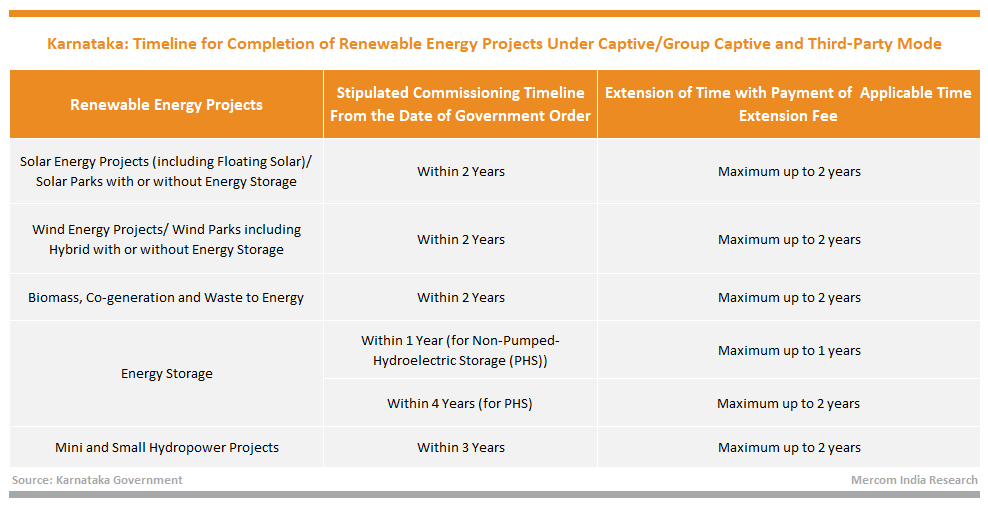 The Karnataka Renewable Energy Development Limited (KREDL) is the state nodal agency for the implementation of this policy.