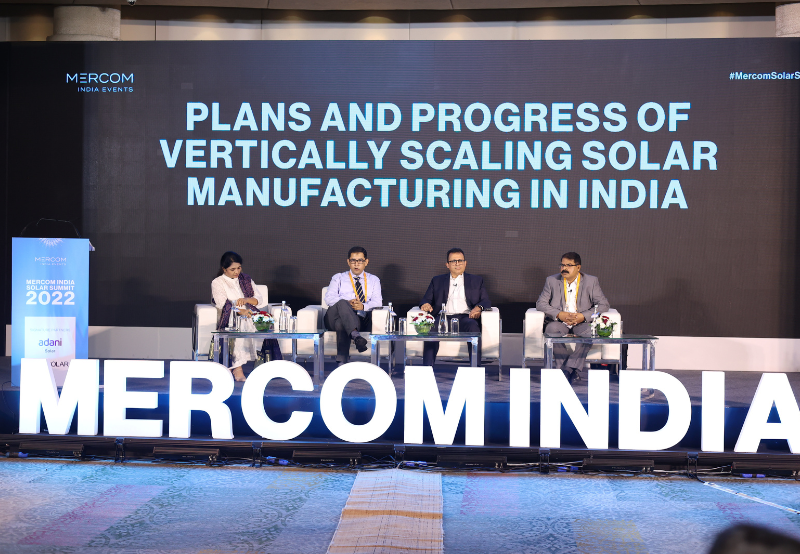 India’s current module manufacturing projection, excluding the capacity under the Production-Linked Incentive (PLI) program, is expected to be 8-9 GW until 2024. This translates to a total capacity addition of 24 GW by 2024. The cell manufacturing capacity will be 14 GW by the same year.

In November 2020, the government approved the PLI program for ten critical sectors to enhance India’s manufacturing capabilities and exports under the ‘Aatmanirbhar Bharat’ initiative.

The two-day Mercom India Solar Summit 2022, which began on July 28 in New Delhi, discussed issues relating to the vertical integration of solar manufacturing in India in a session titled ‘Plans and Progress of Vertically Scaling Solar Manufacturing in India.’

The panel discussed timelines for cell, wafer, and polysilicon manufacturing to catch up and the technologies being planned for production beyond polycrystalline and monocrystalline passivated emitter and rear contact (PERC) solar cells.

Integrated solar manufacturing On First Solar’s foray into the Indian market, Sujoy Ghosh said, “We are one of the few solar manufacturing companies outside China, and we see India as an important market. We have been engaging with the Indian government since 2016. Things have changed in India. After the implementation of the Basic Customs Duty (BCD) and the Approved List of Models and Manufacturers (ALMM), the domestic manufacturing industry is well equipped to compete with cheap Chinese exports. Post-Covid, the risk of logistics has increased. It’s better to have the manufacturing segment near the point of demand now.”

On thin film technology, Ghosh said, “We are a thin-film manufacturer and have the entire manufacturing process under one roof. It’s a very competitive process, with zero dependency on silicon. We currently have 2.5 GW of manufacturing capacity in the country and are in a position to give the lowest cost of production. Earlier, we didn’t sell modules in India because we lacked capacity. But now, the demands have increased, and we are in a better position. We have the confidence to stand against any technology and will always be competitive.”

In the last 16-18 months, the solar sector has been impacted by several factors, including supply chain issues. Supply chain disruptions have highlighted the need for vertical integration of the solar manufacturing ecosystem.

“We have a captive supply chain, and the silicon supply chain is commoditized. We work with our captive suppliers and are insulated from the ups and downs of the commodities. It is tough to compete against dumping. The best thing about us is that we have the ability to project the cost for three to four years, and we bring a certain amount of certainty in terms of cost,” noted Ghosh.

Bhutiani said Adani was looking at integrating the vertical and ancillary manufacturing capabilities in the near future. He said things would be a bit difficult for the next two years.

“Currently, we have 1.5 GW of multicrystalline modules. We plan to upgrade and convert it to 2 GW of mono PERC and 2 GW of TOPCon by the end of the year. We are basically looking at integrating vertical and ancillary manufacturing capabilities. We are working to make this happen to control the modules’ production. With the duties in place, the government is doing everything to promote domestic manufacturing,” he said.

Regarding the current geopolitical situation and the energy crisis in the European Union, Bhutiani said, “If we don’t have energy security, we will struggle like the European Union. If we dream of energy security, we’ll have to endure the pain for the next two years. We are planning for a 10 GW manufacturing capability by 2025 and may look at further expansion. The government is looking at the manufacturing sector closely, and in the next decade, there will be a big opportunity for developers and manufacturers. The next three years are very critical. If we don’t allow manufacturers to grow, it will be detrimental to the manufacturing segment.”

Sharing his company’s plans, Sharma said, “We are planning to set up cell and module manufacturing capacity of 3 GW. We will start production by the end of next year or the start of 2024. We will ramp it up to 5 GW by 2025, and it will be fully integrated. We will also enter into polysilicon manufacturing, for which the government has to provide all the details. Currently, the trend is TOPCon, and we can upgrade mono PERC to TOPCon. Once you control polysilicon, you can control the whole manufacturing process.”