PTC India accounted for 46.25% of the total power traded across all short-term open access markets

Uttar Pradesh sold the highest amount of power in the day-ahead market (DAM) in the second quarter (Q2) of 2021, accounting for 13.9% of all power sold in the quarter, according to Mercom’s India Solar Open Access Market Report.

The report gives insights into open access transactions, including short-term transactions like DAM, bilateral contracts, real-time market (RTM), and the green-term ahead market (GTAM) within the open-access space.

Uttar Pradesh was followed by Teesta Stage III and Sembcorp with 6.7% and 6.5% market share, respectively. Madhya Pradesh (6.4%), Delhi (5.4%), Himachal Pradesh (4.9%), Rajasthan (4.7%) were among the states that sold the most power in the day-ahead market during the quarter. 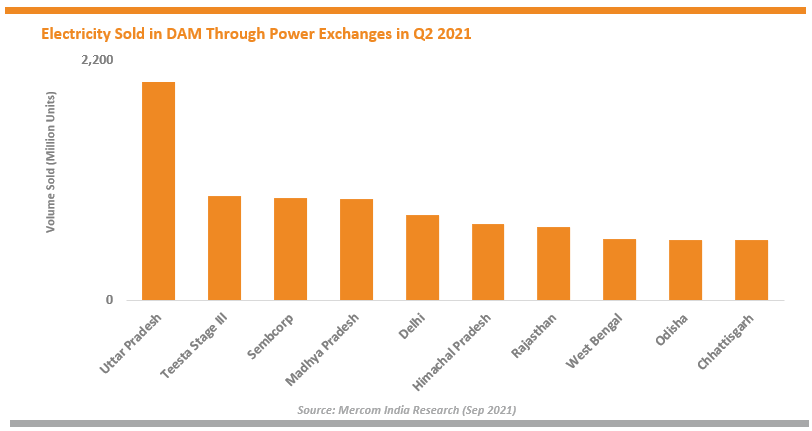 PTC India traded the highest short-term power, making up 46.25% of the total market share across all markets. Tata Power Trading Company and NTPC Vidyut Vyapar Nigam followed with 12.17% and 10.6%, respectively. Adani Enterprises and Manikaran Power accounted for 9.11% and 7.21%, respectively.

Private entities dominated the sale of power through bilateral contracts in Q2 2021, with Raipur Energy Limited (RPREL) selling the highest volume of 2,419 MU. Six out of the top ten sellers were private companies. Madhya Pradesh was the top state and sold around 1,250 MU of electricity.

The top five entities that sold power via bilateral contracts during the quarter were RPREL with 12.6%, Madhya Pradesh with 6.5%, Jindal India Thermal Power with 6.4%, Diligent Power with 5.3%, and Rajgarh Energy Generation with 5.1%.

Gujarat purchased 2,443 MU of electricity through bilateral contracts and accounted for 12.74% of the total bilateral power purchases. It was followed by Tamil Nadu, which purchased 2,430 MU, and Punjab, with 2,002 MU.

Andhra Pradesh was the top buyer, accounting for 14.9% of the total purchased power on RTM, followed by Telangana (9.5%) and Rajasthan (8.4%).

For the complete report, visit: https://mercomindia.com/product/india-solar-open-access-market-report-q3-2021