The country added 9.4 MW of new solar installations in March this year

The numbers had decreased significantly in March and April last year because of the impact of the Covid-19 pandemic and the subsequent lockdown imposed by the government, but since July 2020, the market had recovered, and the numbers were back to the pre-lockdown levels.

As per the numbers released by the agency, 77% of the new installations were of capacities below 4 kW, and the total installed capacity in March increased by 18.1 MW. 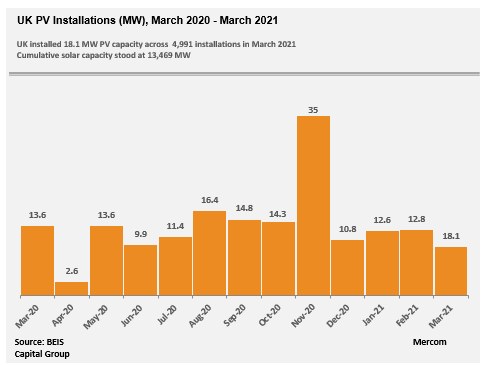 In November last year, the UK had announced that it would cut emissions to net-zero by 2050. The competitive nature of the ‘Contracts for Difference’ program has been successful in driving a substantial number of renewable projects in Great Britain and, in the process, bringing down the cost of electricity. The CfD program is the government’s primary mechanism for supporting low-carbon electricity generation in the country.

It also released a ten-point plan for a green industrial revolution to advance the country towards net-zero emissions. Under the plan, the government will provide funding worth £12 billion (~$15.95 billion) for its implementation and create up to 250,000 new green jobs. The government anticipates three times more investment from the private sector to support the new plan.