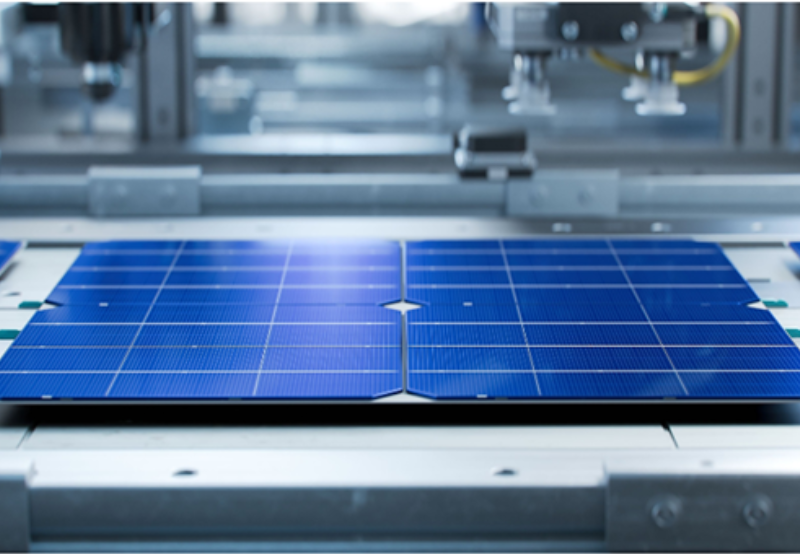 In a new study focused on increasing the power conversion efficiency (PCE) of perovskite solar cells (PSCs), materials scientists examined the non-radiative recombination sites in PSCs, which is one of the primary reasons for loss of voltage leading to the deterioration of cell efficiency.

The experiment was focused on passivating the interfaces between perovskite absorber and charge transport layers (CTL) by penetrating the mixed cation of GuaBr (guanidinium bromide) and OABr (n-octylammonium bromide) into the perovskite bulk.

The research is published in the scientific journal Advanced Energy Materials. 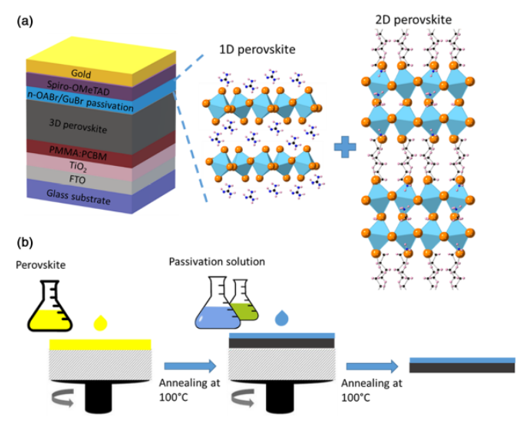 Schematic illustration showing a) device structure and b) the surface incorporation of GuaBr, OABr, and their mixture Source: Wiley

The experiment targeted voltage loss due to recombination, which occurs in PSCs through the perovskite bulk, the perovskite/ ETL or HTL interfaces, and between the ETL and HTL through shunt pathways. The scientists used the mechanics of dimensional engineering to incorporate bulky organic cations in PSCs that form low-dimensional columnar (1D) or layered (2D) crystal structures.

The scientists studied a mix of 1D and 2D or 2D and 3D perovskite structures, which would improve the stability and efficiency of the PSC device. They discovered that interfacial passivation with a 1D/ 2D capping layer could be obtained by depositing a 3D perovskite photoactive layer and an isopropyl alcohol (IPA) or chloroform solution of 1D/ 3D spacer cations.

The team observed a few recent experiments where scientists used a single spacer cation (OABr), resulting in conversion efficiency of 23.38% but with poor device stability. The study revealed that incorporating GuaBr cations as the surface passivation layer between the perovskite and HTL improved the stability of the PSC device.

Guanidinium cations are smaller and provide bulk passivation, making it easier for the Gua ions to penetrate the perovskite bulk. The compound localizes at the grain boundaries where it forms hydrogen bonds with undercoordinated iodine species resulting in the suppression of charge recombination— ultimately preventing the current loss in the PSC device. 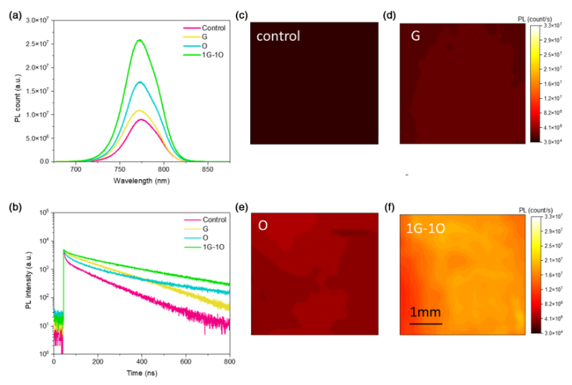 The scientists then fabricated the PSCs under four conditions, including control samples with no passivation on the HTL/ perovskite interface and various conditions of passivation layers on the HTL side comprising GuaBr and OABr individually and a mixture of both.

Another research from the ARC Centre of Excellence in Exciton Science recently achieved PCEs of 15.5% and 4.1% in solar glass, with varying prototype semiconductor solar cells made of perovskite materials. The solar glass had a visible transmittance percentage of 20.7% and 52.4%, respectively, which could be used in the windows of tall buildings.

Materials scientists at the UCLA Samueli School of Engineering and researchers from five other varsities recently demonstrated a simple surface adjustment in the manufacturing of perovskite solar cells to overcome the degradation of cells due to prolonged exposure to sunlight.