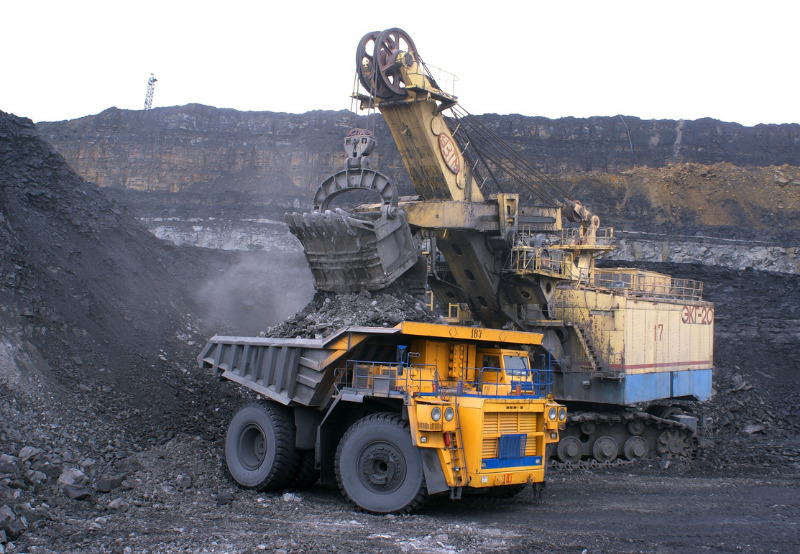 A new report titled the ‘Coal Cost Crossover 2.0‘ published by energy and climate policy firm Energy Innovation has noted that 80% of the coal-fired power plants in the United States are already uneconomic compared to new wind and solar projects.

The report compared the economics of each coal plant in the U.S. against the expected economics of potential new wind and solar plants nearby to conclude that coal generation is at a crossroads in the country.

The combined fuel, maintenance, and other costs of most existing coal-fired power plants are now higher than the all-in costs of new wind or solar projects owing to the recent swift cost declines of wind and solar generation, the study elaborated.

According to the report, while 239 GW of coal capacity was online in the U.S. in 2019, in 2020, 72% of that capacity, or 166 GW, was either uneconomic compared to local wind or solar or slated for retirement within five years.

In a report released in 2019, Energy Innovation had analyzed a 2018 dataset of capital, operations, and maintenance costs for coal, wind, and solar. The findings revealed that 62% of the existing coal capacity was uneconomic compared to producing the same amount of energy locally from new wind or solar. The analysis projected that by 2025, more than 77% of the coal fleet would be unable to compete against new renewables. Building on the earlier study, Energy Innovation used new datasets to produce new levelized cost of electricity (LCOE) figures for solar, wind, and coal.

Within the contiguous U.S., ReEDS defines 134 balancing areas. Within those balancing areas, there are 356 further subdivided regions, called resource supply regions, which characterize the wind resource quality and supply. The utility-scale photovoltaic solar resource information is available at the “balancing area” level, and the utility-scale onshore wind resource information is available at the “resource supply region” level. The differing spatial resolution of these two categories is intended to reflect the granularity of the quality and quantity differences of specific resource supplies. 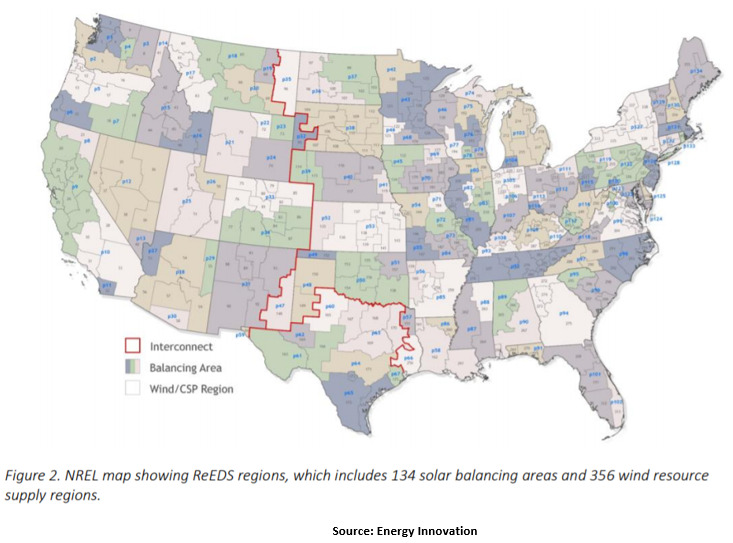 Based on the data, Energy Innovation noted that the LCOE of utility-scale solar in the U.S. would remain in the range of $25.80-$42.22/MWh, while an average cost of generation would settle at $33.96/MWh.

The LCOE of wind generation, however, seems to have a wider range, falling in the range of $20.95-$70.87. Even then, its average LCOE in the country is seen to be settling at $36.49/MWh, closer to the average cost of solar generation.

The research compiled a list of 235 U.S. coal plants operated by utilities and independent power producers, excluding plants used for combined heat and power, with a tiered system indicating the degree of confidence in each plant’s particular estimate. The going-forward cost estimate for each coal plant is the sum of three principal components: cost of fuel, operations and maintenance costs, and going-forward costs for capital investments needed to continue operating the plant.

Using the calculated plant-level weighted average LCOEs for wind and solar and plant-level going-forward coal cost, the study compares the three values to determine to what extent the U.S. coal fleet is currently uneconomic.

While the original analysis projected uneconomic coal capacity in the U.S. to be 77% by 2025, the pace was almost reached in 2020, the study observed.

The current analysis focused on whether solar or wind could entirely displace annual coal generation at a given plant cost-effectively. The study also noted that many large coal plants are just barely economic, based on our analysis, and will likely become uneconomic if renewable costs keep declining or coal capacity factors decrease. The study used three different analyses to determine a range of plausible external costs of coal per megawatt-hour (MWh), i.e., $30/MWh, $69/MWh, and $146/MWh.

Applying the lowest external cost in the range ($30/MWh) to the coal going-forward cost for each coal plant, the research finds that not one coal plant in the fleet remains economic. Even conservative estimates of the externalized cost of coal generation incorporated into the cost analysis show that continuing to operate the remaining “economic” coal plants in the U.S. is likely not economically justified. Even the most economic coal plants face threats to their viability, including the cost of complying with more stringent emissions and pollutant standards.

It further emphasized that replacing coal energy with wind or solar is unlikely to negatively affect system reliability. Almost half the plants in the analysis, representing 39% of the megawatt-hours, had a going-forward cost more than 25% greater than wind or solar LCOEs, indicating room to complement these resources with storage, demand response, and energy efficiency to amplify their contributions to reliability.

Drawing attention to the Asia-Pacific region, a report published by Wood Mackenzie in 2020 said that the region could expect to see cheaper LCOE for renewables compared to coal by 2030. Investments in the region are also expected to cost 23% lesser than coal investments by the end of the decade, it added.

In a 2019 report, ‘Monthly Energy Review’, published by Energy Information Administration, the U.S. government agency had noted that annual energy consumption from renewable sources in the United States in 2019 exceeded coal consumption for the first time since 1885. The study pointed out that change reflected the continued decline in the amount of coal used for electricity generation over the past decade and growth in renewable energy, mostly from wind and solar.

Stressing on the health risks burning coal leads to, the current research from Energy Innovation added that the location of a particular coal plant—especially its proximity to population centers—largely determines how its pollution affects public health. The study further presented a pollution finding of toxic gases such as carbon dioxide, nitrogen oxides, and sulfur dioxide emissions to help understand how these have deep socioeconomic impacts and consequences.

In its conclusion, the report predicted that coal would continue to decline and insisted that policies informed by cost analysis of coal and renewables and focused on competitive procurement and coal asset securitization could enable a transition that more effectively balances utility, consumer, environmental, equity, and community interests. Immense savings are available across the country, with ample opportunities to reinvest locally in replacement clean energy portfolios, the study further noted.

The report also urged policymakers to make optimal use of the key role they play in e in assessing the comparative economics of various generation resources and creating a policy pathway toward clean, reliable, and cost-effective portfolios.

As a policy recommendation to help the transition from coal to renewable modes, the report suggests state legislators authorize public utilities commissions (PUCs) to use ratepayer-backed securitization to reduce the costs of retiring uneconomical coal facilities that are passed onto consumers, include provisions for these generators to be replaced with portfolios of renewables assets, and set aside funding for energy transitions in the community.

The study urges the PUCs to assess the economies behind early coal retirement. PUCs have also been advised to undertake all-source procurements when they identify the need for more generation resources, allowing all resources to compete to meet a technology-neutral need.

The study’s findings seem to bolster the Biden administration’s pledge to ensure that the country cuts its greenhouse gas emissions to at least half by 2030 and decarbonizes the U.S. economy by no later than 2050.

A Wood Mackenzie report noted that renewable power in India is expected to be 56% cheaper than new-build coal by 2030.

Earlier this year, the International Energy Agency predicted that solar energy is expected to witness exponential growth and match coal’s share in the Indian power generation mix by 2040 or earlier. The share of coal is expected to decline from 44% in 2019 to 34% in 2040.