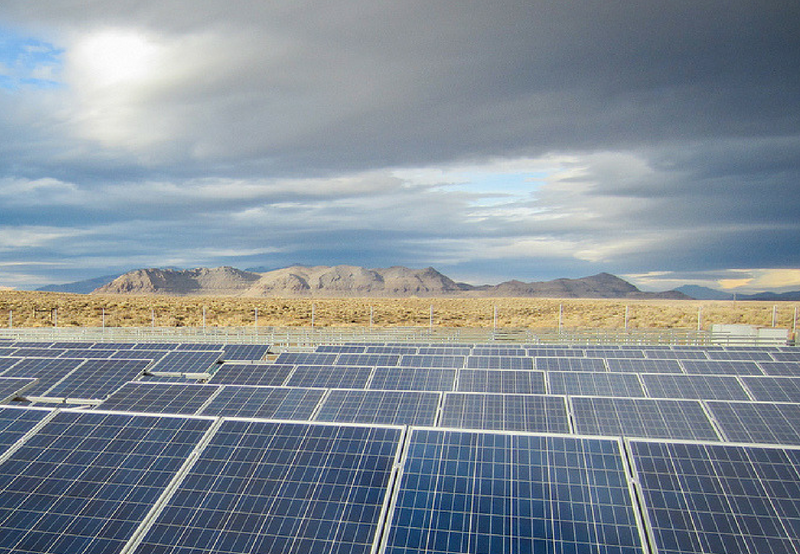 India has a total installed large-scale solar capacity of 9,018 MW and a solar pipeline of 14,030 MW as of December 2016, with the top 10 states accounting for approximately 90 percent of all solar installations and pipeline. These states including, Tamil Nadu, Rajasthan, Gujarat, Andhra Pradesh, Telangana, Madhya Pradesh, Punjab, Karnataka, Maharashtra, and Uttar Pradesh hold the key to India’s solar future.

Tamil Nadu leads all other Indian states with 1,577 MW in-operations. In order to fulfil the state Renewable Purchase Obligation (RPO), the Tamil Nadu Generation and Distribution Company (TANGEDCO) recently auctioned 500 MW solar. The state has close to 485 MW of solar under various stages of development.

Rajasthan’s position was recently usurped by Tamil Nadu as installation activity in the state has slowed. The state has 1,324 MW of solar in-operation with a project pipeline of ~1,206 MW and could reclaim the top spot.

Considering Gujarat has large tracts of land ideal for large-scale grid-connected solar projects and hasn’t faced evacuation and transmission issues, the solar sector in the state has been stagnant with ~1,101 MW in-operation and 300 MW under development. Gujarat is a power surplus state and has met its RPO obligations and is not in a hurry to ramp up its solar installations.

Telangana has come a long way with its solar policies and programs since its inception as a state. These programs have helped the state leapfrog others to claim the fifth spot with 1,006 MW in-operation and 2,418 MW under development.

Madhya Pradesh has transformed itself from a power deficient state to a power surplus state. Rapid implementation of policies and programs has led to a growing solar sector. Currently, the state has 861 MW in-operation and 722 MW under various stages of development. The infrastructure at the Rewa solar park is nearly complete; once tenders are issued, solar is expected to pick up pace.

The largely agricultural state of Punjab has shown progress in terms of fulfilling its power demand. Punjab is ranked seventh with projects in-operation aggregating 569 MW. The state has a project pipeline of ~453 MW.

Karnataka has the largest solar project pipeline of ~3,376 MW. The state is facing solar park issues relating to evacuation and transmission which could delay projects. The state is ranked eighth with projects in-operation aggregating ~511 MW.

Maharashtra, the most industrialized state in India, is ranked ninth in terms of solar energy production. Projects aggregating ~384 MW are in-operation. The state has a project pipeline of 957 MW.

Uttar Pradesh is a surprise addition, after power purchase agreements (PPAs) in Jharkhand for 1.1 GW were not signed. The development of solar in Uttar Pradesh has been slow; the state has in-operation projects aggregating 241 MW and a project pipeline of 696 MW.

Developers told Mercom that in Tamil Nadu and Rajasthan, they are wary that curtailment might come back to haunt the sector. The distribution companies (DISCOMs) can be reluctant to purchase solar power due to cost higher than conventional energy. Tamil Nadu has yet to join the Ujwal DISCOM Assurance Yojana (UDAY) program which aims at the financial turnaround of DISCOMs. Until then, developers will be concerned due to TANGEDCO’s history of payment delays.

Madhya Pradesh also suffers from transmission and grid issues. Developers in the state have faced curtailment in some cases. The state has also witnessed payment delays.

Developers were disheartened by the slow progress of solar parks in Karnataka. The DISCOMs in Karnataka are in bad financial shape and some are reluctant to sign PPAs and buy renewable power due to higher power purchase costs. In Maharshtra, developers have witnessed the shut-down of conventional thermal projects making them skeptical about investing in large-scale grid-connected projects in the state.

Solar projects are capital intensive and “a lack of financing infrastructure in the country is impeding desired growth in the sector,” said a developer. The developers want the Ministry of New and Renewable Energy (MNRE) to be more involved when issues between developers and state nodal agencies come up.

What’s Being Done to Address Challenges?

In Rajasthan, curtailment took place earlier this year due to required system parameters. The PPAs have been delayed in the state. Earlier, the state used to sign PPAs at preferential tariffs; the program ended in March of 2016. “We are trying to fast-track the competitive bidding process and solve issues between DISCOMs and developers,” said an official at Rajasthan Renewable Energy Corporation (RRECL). The green energy transmission corridor, once developed, will boost the willingness of DISCOMs to sign PPAs, as they can supply to other states and will have more buyers, added the RRECL official.

The Maharashtra State Power Generation Company (MAHAGENCO) power projects were shut-down as the DISCOMs were able to buy cheaper electricity from National Thermal Power Corporation (NTPC) and private players. To meet the state’s RPO, renewables – especially solar – are being given a big push by the state and “there will be no curtailment from solar,” commented an official at Maharashtra Energy Development Agency. Maharashtra has also joined the UDAY program and the benefits will allow the DISCOMs to sign new PPAs.

The TANGEDCO is tendering another 500 MW. To boost the transmission and evacuation infrastructure in the state, TANGEDCO has begun construction of substations. Currently, four substations are nearing completion and are expected to be completed by June 2017. Due to transmission issues, the state has curtailed solar in the past; “but, not so any more, we are well on track,” commented an official at TANGEDCO.

In Madhya Pradesh, the evacuation and grid-connectivity issues are on the verge of being resolved, commented an official at Madhya Pradesh Urja Vikas Nigam (MPUVNL). “None of the state DISCOMs received notification from higher authorities to connect transmission and grid lines. As of now, all details are being distributed to zonal and sub-zonal offices and through interdepartmental deliberations all hurdles will be overcome, added the official at MPUVNL.

In Punjab, we have already set up canal bank and canal top projects as these take land availability out of the equation. Through implementation of innovative technology and scaling up of the transmission infrastructure, Punjab will remain a sunny state, commented an official at Punjab Energy Development Agency (PEDA).

A Solar Energy Corporation of India (SECI) official said, financing will become easy as development banks and funds from foreign countries are keen to invest in India’s solar sector.

In Telangana, grid is being upgraded and “the state will be able to evacuate all power generated in the future.” The state nodal agency has put an impetus on transmission infrastructure as a lot of projects will be commissioned in the coming years; “the state is gearing up for an industrial boom,” commented an official at Telangana New and Renewable Energy Development Corporation.

“To complement growth in the solar sector the MNRE has facilitated easy finance through IREDA, initiated pilot projects for Research & Development, and, launched the solar parks program,” said an official at the MNRE.

The MNRE official also added that the trade in Renewable Energy Certificates (RECs) has gone up; DISCOMs look at it as a means of fulfilling their RPO at cheap rates. There are 19 states and six union territories that do not produce the required amount of renewable energy. Through RECs they can easily achieve their RPO. “This REC trade is a bonus for developers.” This will also help address curtailment because this will allow states producing surplus to sell power to others through RECs.

Officials at state nodal agencies in Uttar Pradesh and Karnataka chose not to comment for this article.