The Kerala State Electricity Regulatory Commission will hear the case on January 27, 2021

In an interim order, KSERC said that the maximum pooled tariff for the solar energy supplied to KSEB should not exceed ₹2.66 (~$0.036)/kWh plus the trading margin. The regulator added that the power sale agreement (PSA) should be submitted for approval by January 5, 2021.

SECI has adopted the practice of pooling the tariffs discovered in competitive bidding every six months. This is to ensure the availability of solar at a uniform rate to all the distribution companies (DISCOMs).

A pooled tariff is the weighted average of the tariff discovered in the competitive bidding process for a specific period. Some auctions like the manufacturing-linked solar project development resulted in a tariff of ₹2.92 (~$0.04)/kWh while the tariffs discovered in the 2 GW (Tranche IX) of ISTS-connected solar projects auction were in the ₹2.36 (~$0.0313)/kWh and ₹2.38 (~$0.0316)/kWh range. 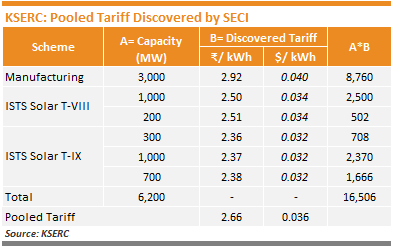 SECI is now in the process of signing PSAs at this pooled tariff with state DISCOMs, KSEB being one of them.

SECI also pointed that though the indicative pooled tariff worked out to be ₹2.66 (~$0.036)/kWh, the actual tariff payable by the DISCOMs may vary because actual generation will differ based on projects under different tranches of the program. Other factors that could affect the tariff are an inadequate number of DISCOMs coming forward to procure energy, or power purchase agreements not fructify into a binding contract, and the date of the commercial operation of the projects being different under various programs.

It also said that negotiation was on with other DISCOMs for the sale of energy (6,200 MW).

SECI told KSERC that it would finalize the PSA through discussions with KSEB and incorporate the terms with modifications. After that, both sides would initiate the draft PSA and file it before the KSERC for approval.

The regulator asked KSEB to submit the comments on the affidavit filed by SECI by January 05, 2021.

The Commission allowed KSEBL and SECI to proceed with the procurement of 200 MW of solar power but only under the condition that the tariff does not exceed ₹2.66 (~$0.036)/kWh plus a trading margin. The PSA would be effective only after the formal approval by the Commission to be decided in the hearing on January 27, 2021.