In a Welcome Move, Gujarat Modifies its Land Laws to Set up Wind and Solar Hybrid Parks

In a positive development for the domestic renewable energy sector, the state government of Gujarat has modified its land laws relating to the development of wind and hybrid (wind and solar) parks in the state. Land has been earmarked for wind and wind+solar hybrid projects auctioned by Gujarat state agencies as well as central agencies.

According to an official at the Gujarat Power Corporation Limited (GPCL), “Now, wind and hybrid parks will be developed in Gujarat. These parks will be developed on the same lines as solar parks. For central government entities such as the Solar Energy Corporation of India (SECI), National Thermal Power Corporation (NTPC), it will now be mandatory to consult with Gujarat state departments before issuing tenders for wind or hybrid project capacities.”

The GPCL official informed that this law has been brought into effect keeping in mind that the central government agencies tender projects that can be set up anywhere in India. This used to create issues as the capacities were awarded without due diligence and later the developers would face issues of land availability.

With the new laws in place, the state government has earmarked space in Kutch region which has high wind energy potential. The approximate space required for 30 GW of wind and hybrid projects will be developed and the central government agencies can tender capacities for a total capacity of 20 GW only, according to the official.

The central government agencies will be required to deliberate with the state before issuing such tenders in order to check the preparedness of the parks and the land availability.

Until now, Gujarat has been purchasing wind power to fulfill its renewable purchase obligation. After the first-ever wind auction conducted by SECI in which wind tariffs fell to ₹3.46 (~$0.051)/kWh, an increasing number of state departments have opted for auctioning the wind capacity rather than wait for central agencies. Moreover, a large number of wind tenders by central as well as state agencies further led to issues of land availability for such projects.

This law is a refreshing initiative by the state government because earlier, while land was made available for wind projects auctioned by Gujarat Urja Vikas Nigam Limited (GUVNL), the winners of wind auctions conducted by SECI were left annoyed over the unavailability of land. With this development, Gujarat has become the first state to come up with the idea of wind and hybrid parks.

The Pavagada solar park also had similar issues where the state officials on the ground felt that central government agencies need to visit the park on a regular basis and coordinate better before announcing policies, tenders and due dates that match the reality on the ground.

In June 2018, Gujarat launched new solar plus wind hybrid power policy in a bid to promote the simultaneous production of wind and solar power in the state. 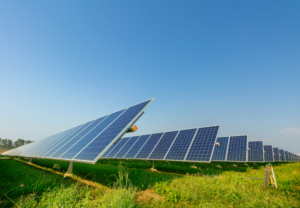