The Union Minister for Finance and Corporate Affairs, Nirmala Sitharaman tabled the Economic Survey 2018-19 in Parliament on Thursday. The survey, which terms renewable energy sources as a strategic national resource, says, “Harnessing these resources is part of India’s vision to achieve social equity and energy transition with energy security, a stronger economy, and climate change mitigation.”

The survey has found that while increasing access to energy is important, it is also imperative that this comes at much lower costs to the environment than it has happened historically in most of the advanced economies.

Stating that India has been undertaking one of the world’s largest renewable energy expansion programs, the survey notes that the share of renewable energy is progressively increasing in the Indian electricity mix.

According to Mercom’s India Solar Project Tracker, the installed capacity of operational solar PV projects in India has crossed the 30 GW mark.

The survey estimates that the additional investments in renewable projects up to 2022 (excluding transmission) will be about $80 billion at today’s prices and an investment of around $250 billion will be required for the period 2023-2030. Therefore, on an annualized basis, investment opportunities of over $30 billion are expected to emerge in the next decade and beyond.

The survey also pointed out that access to fast battery charging facilities is the need of the hour to increase the market share of electric vehicles.

The survey pointed out that the implementation of various energy efficiency programs has witnessed exceptional performance in terms of reducing energy consumption, thereby leading to lower greenhouse gas (GHG) emissions and cost savings.

According to a study by the BEE, overall, this has resulted in total cost savings worth ₹530 billion (~$7.74 billion) in 2017-18 and has contributed in reducing 108.28 million tons of carbon emissions. 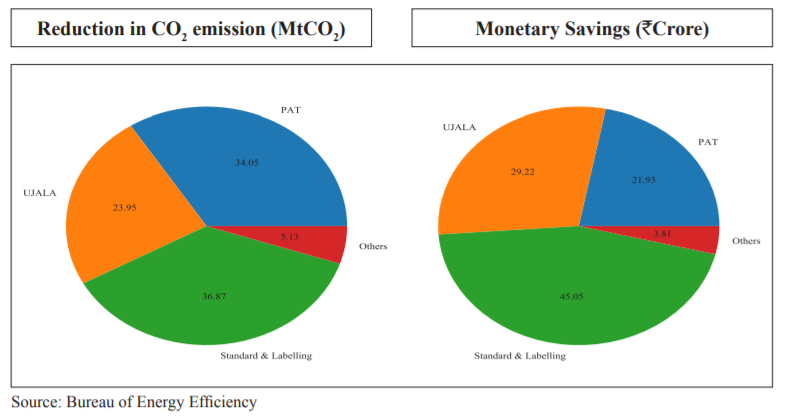 The report points out that considering the intermittency of renewable power supply unless sufficient technological breakthrough in energy storage happens soon, it is unlikely that thermal power can be easily replaced as the main source of energy for a growing economy such as India. The report suggests that a comprehensive energy policy should take into consideration the economies of both coal and renewables as they are interdependent. They are substitutes for each other as a source of energy but are complementary in keeping the flow to the grid stable as coal generation represents a stable source of power while renewable energy may be variable.

According to the survey report, the renewable energy landscape is transforming. Progressively declining costs, improved efficiency, and reliability have made renewable energy an attractive option for meeting the energy needs in a sustainable manner and helping India pursue its low carbon development pathway.

Recent years have seen rapid growth in installed solar generating capacity along with significant improvements in technology, price, and performance. Moreover, creative business models have spurred investment in this sector. Priority has been accorded to the seamless integration of renewables into the grid and better grid stability.

Recently, the Ministry of Power issued a vision document which charts the way forward for India’s power sector. The document, called “Vision 2024”, aims at developing a sustainable, viable, efficient, and competitive power sector to facilitate economic and social development. The report points out that the generation capacity in India has increased drastically in the past decade, but the sector is beset with falling plant load factor (PLF) and stressed assets.