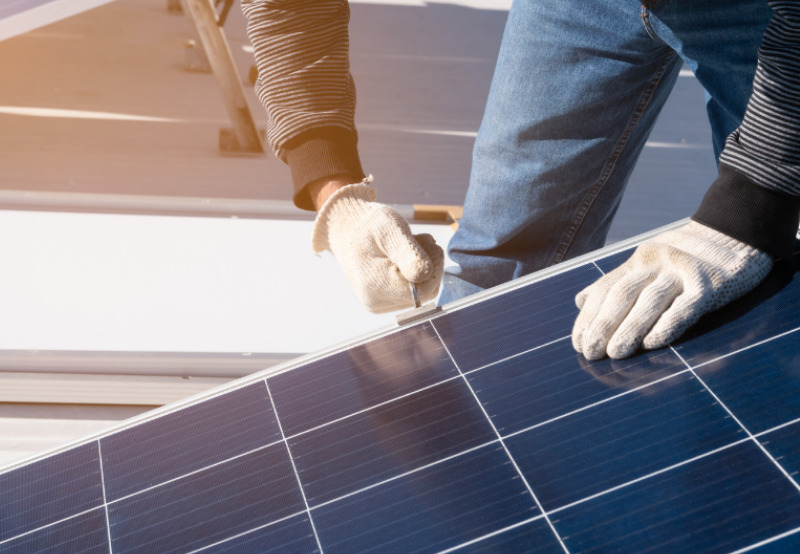 The Goods and Service Tax (GST) Council’s recommendation to raise GST on solar components from 5% to 12% has project developers worried about its impact on project costs.

The GST rate on solar modules was set at 5% in 2018 as per the GST Council’s recommendations.

But last week’s recommendation for the increase by the GST Council could make solar projects unviable, according to developers.

The GST council has stated that for “specified renewable energy parts,” the GST would be 12% instead of the earlier 5% with effect from October 1, 2021.

Under the existing regime, 70% of the gross value of the contract was considered for the supply of goods, attracting a 5% rate – which will now be 12%.

This is in the case of a contract of supply for solar power generating systems. The remaining 30% is for the supply of taxable services, attracting a GST rate of 18%.

Adding to the challenges of developers

Commenting on the proposal to hike the GST, Animesh Damani, Managing Partner, Artha Energy Resources, said, “The new recommendation by the GST council, increasing the proposed tax to 12% for renewable energy projects, will create a fresh set of challenges for the sector to address. Compared to the earlier 5%, this is a significant increase and will impact both the ongoing and upcoming projects. Utility-scale, open access, and OPEX projects will be the most affected.”

He said that these projects’ power purchase agreement tariffs would have to be increased to accommodate the new tax structure. Due to the inverted duty structure, wherein there is no GST levied on the sale of power, the GST paid for the renewables project would become a cost.

“Under the earlier tax structure, the GST component of the project cost was 8.9%, which has now been increased to 13.8%. An overall cost escalation of 4.9% is bound to influence consumer sentiments negatively. There will be prolonged tariff change applications by all developers under the change in law mechanism. DISCOMs, which have been averse to any cost escalation in solar tariffs, might find the new tariffs unattractive. Over one GW of projects across the rooftop and open access segments will be adversely affected,” Damani said.

Policies not aligned with the targets

The government has announced lofty targets of installing 175 GW of renewables by 2022 and 450 GW by 2030. But, developers have been wading through numerous policy flip-flops. Recently, the net metering policy uncertainty had brought the rooftop solar segment to a grinding halt.

“For a country looking towards net-zero emissions and increased dependency on renewable resources for energy generation, we are taking three steps backward for each step taken forward. This becomes even more pertinent since the government has deemed the renewable energy sector a priority sector,” Damani said.

Multiple rulings and policies had already forced the industry to realign involuntarily, creating unprecedented uncertainty. “The ripples of dissent from the net metering policy, duty-free period, and other policy flip-flops are already felt throughout the industry. This will only aggravate the situation for businesses and customers alike,” he added.

The rising cost of components and commodities

Adding to the concerns of the developers is the recommendation for a similar increase in GST on iron, manganese, copper, nickel, cobalt, aluminum, lead, zinc, tin, and chromium – ores and concentrates. An increase in GST from 5% to 12% has been proposed on these commodities.

Over the last six months, the rising price trends in commodities, including steel, aluminum, and copper, had already increased the burden on the solar industry. With the proposed increase in GST now, the challenges have increased for developers. The solar sector had just begun to recover from the impact of the second wave of the Covid-19 pandemic.

Pinaki Bhattacharyya, MD & CEO Amp Energy India, said, “With the industry still coming to terms with the effect of the impending basic customs duty imposition from April 2022, the decision to hike the GST in the middle of the year would lead to an increase in the cost of solar and wind power. The solar module/wind turbine generator prices have already gone up, and any additional tax burdens can make some projects unviable or slow them down. We have finally got some momentum going after the second wave of Covid-19, but these untimely announcements will definitely derail the 175 GW program and damage the sector.”

“The government should walk the talk to allow us to get India to meet the 175 GW target by not taxing the sector anymore. We are making clean power in India, and measures like these are against the vision of Atmanirbhar Bharat,” Bhattacharyya said.

The tedious process of claims under the ‘change in law’ clause

The difference in cost due to the rise in GST rates can be claimed under the ‘change in law’ clause. But this is not a preferred option for developers who are wary of the tedious legal process, long delays, and expenses.

Another source who wished to remain anonymous told Mercom that such unforeseen changes could affect project viability. “A developer can file a review petition as this new GST hike would fall under the ‘change in law’ clause in renewable energy PPAs. But, the whole process is expensive and time-consuming. This recommendation will affect our tariffs and internal rate of return,” the source said.