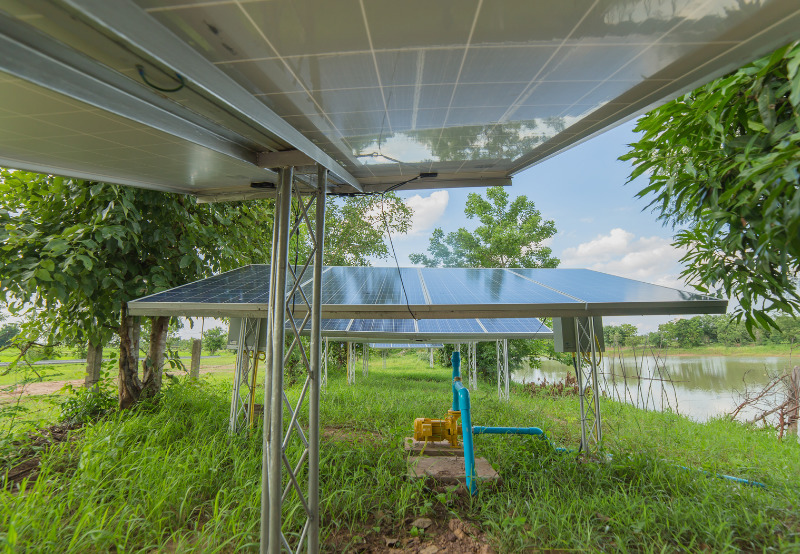 The program consists of three components. Under Component A, individual farmers, cooperatives, and farmer producer organizations with cultivable or barren lands can install solar projects of 500 kW to 2 MW in size.

Without a centralized government database, the exact manufacturing capacity of cells and modules tends to vary based on whom you ask, from 10-16 GW for modules and 1 to 3 GWs for cells.

Saluja added that Premier Energies has already set up a 750 MW DCR cell line. The trial production has begun, and the total capacity will be operational in two to three months. “We have further started setting up another 1.2 GW cell and 1.2 GW module line to meet the increasing demand,” he said.

The module manufacturers have a larger domestic market now due to DCR. But the availability of locally made cells is a challenge. The cell manufacturing capacity in India has not grown as robust as the modules, resulting in shortage and price volatility owing to demand-supply mismatch.

She argued that an acute shortage of DCR cells was prevalent even when the government announced the KUSUM program. However, now many domestic cell makers have increased their capacities to some extent.

Only a handful of DCR cell makers

However, Sameer Naigaonker, Sales Head, Ecozen Solutions, had a different opinion. “Most of the indigenous manufacturers do not make cells. Currently, there are very few companies that make DCR cells. All domestic module manufacturers have to depend on them for the supply of cells. In my opinion, it is not doing any good to these manufacturers,” he said.

Mercom had earlier reported on the revisions needed to scale the KUSUM program. The stakeholders had stated that the program demands a considerable workforce and investments to even participate in the bid.

So, stakeholders suggest that consortiums of manufacturers and system integrators will have better financial, operational, and product capabilities to participate in the program.

According to Pavan Siddhi, Managing Director, Sungrace Energy Solutions, “The policy favors only big players who make solar cells and modules with huge investments, which is beyond an average micro, small and medium enterprise’s (MSME) capability,” he said.

On tackling the short supply of modules under the DCR category, Naigaonker and Siddi voiced the same opinion.

Siddhi said that manufacturers cannot meet the DCR cell requirement as long as the policy of making domestic cells from raw wafers or grey wafers is in force.”The MNRE should encourage the solar cells made from blue wafers or semi-finished cells, called printing. This is an easy way to create more capacity in a short time in the DCR cells segment. Otherwise, all the module manufacturers will be shut shop in the next two years.”

“If the government can at least allow blue wafer cells, then most domestic manufacturers’ dependency on a few cell manufacturers will be reduced, and supply would never be a challenge,” said Naigaonker. He believes it might even stabilize the price of modules.

When asked how rising module prices affect the system integrators for KUSUM projects, Siddhi said, “The KUSUM program focuses on keeping prices low rather than successful execution of the project. Project managers are not bothered about implementation. Instead, they are content with the price discovery. The tender conditions were made such that they select only a handful of suppliers for the tender. With the low prices quoted by some manufacturers, the project execution viability was very challenging.”

“Eventually, the stakeholders blamed the failure on COVID, and all the flaws were buried under the carpet. The program’s failure was not because of COVID but due to the improper handling of the DCR policy and the tenders, which resulted in low and unviable tariffs,” he said.

Recently, the MNRE extended the time to complete grid-connected solar projects under ‘component-A’ of the KUSUM program until March 31, 2022.

According to Siddi, “Subsidy under the program is not the issue. The government’s expectation of a consistent fall in solar prices is the problem. Material costs, including those of solar wafers, are going up, but they still expect the final price of the solar pumps to stay low. This attitude will eventually ruin the project.”

Asked if he is facing challenges in the bidding process for the KUSUM program due to market disruptions, Siddhi said that the program is a challenge due to the handling of the project by the government. They should accept that the prices of solar products can also go up and allow executing the work at higher market prices. ”

“Market disruptions can always be handled if there are reasonable margins left in the project. The government wants the industry to use expensive DCR cells but at the same time wants the prices to be low, which can never happen. The KUSUM program will remain a non-executable or low-performing project,” he said.

The government needs to review the objectives of the program. Currently, there is confusion if the goal is to support the local manufacturers or the farmers or the help the distribution companies address the demand of subsidized consumer groups (farmers).