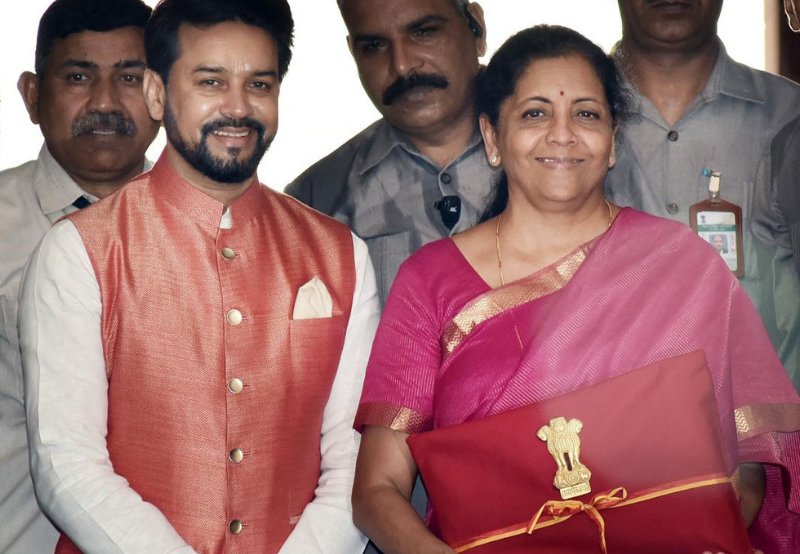 The new budget is here and it sounds promising for the country’s fledgling non-conventional energy sector.

This year’s budget shows a marked increase in the budgetary allocations for renewable energy sources. The budget has an outlay of ₹9.20 billion (~$130 million) for wind power, ₹30.05 billion (~$440 million) for solar (both grid-connected and off-grid) and ₹5 billion (~$73 million) for green energy corridor that aims at synchronising electricity produced from renewable sources with conventional power stations in the grid.

In her speech, Finance Minister Nirmala Sitharaman said,  “We will use the approach of mission LED bulb to promote the use of solar stoves and battery chargers in the country.”

The budget also underlines the relief that will be provided to solar manufacturers in India. The minister stated that to boost economic growth and the Make in India program, the government will launch a program to invite global companies through a transparent competitive bidding process to set up mega-manufacturing plants in advanced technology areas such as semi-conductor fabrication (FAB), solar photovoltaic cells, lithium storage batteries, solar electric charging infrastructure, computer servers, and laptops. The government plans to provide them investment-linked income tax exemptions under Section 35 AD of the Income Tax Act, among other indirect tax benefits.

In its comment, the National Solar Federation of India chairman Pranav R Mehta said, “NSEFI  is very happy and welcomes the proposal in the Union Budget for sunrise and advanced technology in the manufacturing areas for semiconductor fabrication, lithium storage batteries, solar electric charging infrastructure, and solar PV cells, by offering them investment-linked income tax exemptions and other indirect tax benefits. We are particularly elated by the incentives for the important future areas of lithium storage batteries and solar electric charging infrastructure.” However, he was quick to add a note of caution saying that the specific details of these proposals should be looked out for.

“I would like to congratulate Hon’ble FM, Smt Nirmala Seetharaman for presenting her maiden budget. The industry was expecting a policy direction from the government to promote manufacturing through Make In India program, especially in the renewable energy sector. The government announcement to launch a program aimed at encouraging global companies (through competitive bidding process) to set up mega-manufacturing plants in sunrise and advanced technology sectors appears to be a step forward in that direction. We welcome this move as it will boost the Make in India Program. Having said that, setting up mega manufacturing plants of solar photovoltaic cells and modules require a larger support structure in the form of soft loans, export credits in order to compete globally,” said Rajendra Kumar Parakh, Vikram Solar, Chief Financial Officer.

In a significantly positive development for the mobility segment, the budget puts the impetus on electric vehicle (EV) adoption in India. To make EVs affordable to consumers, the government will provide additional income tax deduction of ₹150,000 (~$2,190.97) on the interest paid on loans taken to purchase EVs. This amounts to a benefit of around ₹250,000 (~$3651.63) over the loan period to the taxpayers who take loans to purchase EVs. Moreover, in order to promote e-mobility, customs duty on certain parts of electric vehicles will also be exempted.

Shailesh Chandra, President – Electric Mobility Business and Corporate Strategy, Tata Motors, commented on the budget saying, “The incentives announced today by the Finance Minister, in terms of additional interventions and steps to support the EV adoption, reinforces a strong commitment by the government to steer electrification on a faster trajectory. The proposal to lower the GST rate for EVs to 5% and reduction in duties of EV components, which we are studying, is a welcome step. It will help in further narrowing down the cost of ownership gap against engine vehicles. Additionally, private buyers, who were earlier not considered for a subsidy through FAME II, will now have a reason to seriously consider an EV with the tax exemption of up to ₹150,000.”

Nishchal Chaudhary, Founder & CEO- BattRE Electric Mobility Pvt Ltd, said, “I think the budget has clearly indicated the positive intent of the government in pushing the e-mobility revolution in India. The question of when is not that important as the how. The ‘how’ is now getting addressed. Consumer adoption of this technology not only requires education but also an attractive and feasible overall proposition. I think with the government proposing lowering of GST and providing a deduction of tax on loan interest, the outlay for infrastructure for battery charging stations, push towards Make in India initiative are just the measures required to kickstart the process.”

Moreover, the government has announced that it will support private entrepreneurship in driving value-addition to farmers’ produce from the field and for those from allied activities, like bamboo and timber from the hedges and for generating renewable energy.

In her maiden speech as the finance minister, Sitharaman stated that the government is examining the performance of the UDAY program and it will be further improved. The center will work with the state governments to remove barriers like cross subsidy surcharges, undesirable duties on open access sales or captive generation for industrial and other bulk power consumers. Besides these structural reforms, considerable reforms are also needed in tariff policy. A package of power sector tariff and structural reforms will soon be announced, according to Sitharaman.

On the topic of rural development, Sitharaman announced that all willing households in the country will have electricity by 2022 along with clean energy fuel. It is important to note here that the government’s rural electrification program SAUBHAGYA was launched in 2017 with a deadline of December 2018. However, the government is yet to achieve universal electrification in the country. The program’s dashboard shows that though 100% electrification target has been achieved in all the states except Chhattisgarh — which has a 99.67% electricity penetration.

This budget demonstrates the government’s intent to boost programs that have been announced for the growth of solar, wind, EV, and energy infrastructure sectors. A budgetary allocation of ₹123.5 billion (~$1.80 billion) has been made for the Ministry of New and Renewable Energy (MNRE).

Guru Inder Mohan Singh, Director, and Chief Operating Officer, Amplus Solar commented on the budget, ” The focus on attracting investment in advanced technology area is a welcome move. Technology is typically born in universities in Europe and the U.S. and then commercialized in China before it reaches India. By promoting advanced technology manufacturing here, India can short circuit this process and attract FDI, especially in the background of the U.S.-China trade war. This promotion will also generate employment and slow down India’s brain drain. The vision of India being a global hub for manufacturing of electric vehicles is a pleasant move too. In the past, India has lost to China in the solar manufacturing space. A concerted effort on battery manufacturing will ensure that India does not lag far behind China, despite them having already secured the pole position.”

Sunil Rathi, Director, Waaree Energies, commented on the budget announcement saying, “While we appreciate the government’s focus on environmental reforms, it is imperative to focus on the solar segment as a key contributor for clean energy, which is missing from the Union Budget 2019-20. With the economic viability of the solar power coupled with the fact that conventional energy sources now have to match solar parity, it would have been heartening to see more focus on the solar segment to promote ecological stability. The infusion of ₹700 billion (~$10 billion) in the public sector banks to stabilize the economy will in-turn benefit the NBFCs, which, in the absence of a recognized banking unit to support small to mid-scale solar financing, will provide an impetus to the solar project financing. However, the invitation to foreign PV manufactures to set up shop in India, without prior stabilization of the domestic manufacturing market, is premature and may prove to be counterproductive for the demand in the sector, which will render the NBFC financial support redundant.”

“The government has been indicating some changes in the solar segment for a while. However, we believe that there are critical gaps that need to be plugged. On one hand, while the safeguard duty provided the industry with interim relief, the short-sighted implementation of a year holds the proverbial sword of uncertainty in the industry. Moreover, the lack of tangible movement on the anti-dumping policy has dampened the business projections in the segment. The only silver lining in the budget is the progressive movement towards adoption of EVs and the incentives being offered to the end consumer. The promotion of clean energy through the use of EVs is likely to boost the demand in the segment, thus providing impetus to achieve economies of scale and in-turn create a viable ecosystem.,” he added.