ITC Limited had filed a petition seeking action against the West Bengal State Electricity Transmission Company Limited (WBSETCL) for failure to comply with the open access regulations. It had also requested the Commission to direct WBSETCL for compensating the petitioner towards unutilized banked energy.

Further, the company noted that it had not received any communication from the SLDC, granting permission for open access based on the observations made by the Commission in its order dated July 09, 2020.

The company stated that as per the WBERC phasing regulations 2006, open access should be provided if the contract demand of a consumer is above 1 MW, and there is no bar whatsoever on the capacity of open access. Since the petitioner’s connected load was more than 1 MW, the petitioner was entitled to open access, it argued.

ITC said that the electricity corporation had raised questions about finalizing the open access agreement without receiving permission from the SLDC. The company said that a draft containing the terms of the agreement could be finalized in the meantime, and the final deal can be signed only after receipt of the grant of open access from the state transmission company.

The SLDC, in its response, said that they are well aware of the facts, but they were unable to understand as to whether such a low capacity (0.4 MW) of power should be allowed through open access.

The SLDC further added that once open access to such a low volume of power is granted, then there will be several applications like this, which will jeopardize the system. Moreover, the distribution licensees are responsible for handling the distribution of power and not the SLDC.

After hearing both sides, the Commission noted that the state electricity corporation had passed the onus on to the SLDC, and it had not made any written submission explaining the reasons why they were unable to grant the approval.

The state regulator further added that it was the responsibility of the CESC to ensure the operation of integrated power in the state, and its letter denying open access to ITC Limited because the volume of power was below the stipulated limit of regulatory norms was a misinterpretation of the regulations.

CESC, in its submission, had urged the Commission to formulate new guidelines for a low volume of open access load.

The Commission added that the suggestion given by CESC for the formulation of guidelines for scheduling of low volume of open access load could be considered.

Recently, Gujarat announced an additional surcharge of ₹0.60 (~$0.008)/kWh for consumers’ sourcing power through open access for the period between October 01, 2020, and March 31, 2021. The charge would apply to anyone who acquires power through open access from any source other than their respective DISCOMs. Before that, Haryana and Maharashtra had announced an additional surcharge for open access consumers.

Previously, Mercom had reported that open access had not seen the kind of growth that was initially expected of it. This segment suffers from a variety of constraints and disadvantages on account of regulatory ambiguities and lackluster implementation. 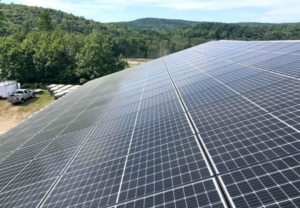