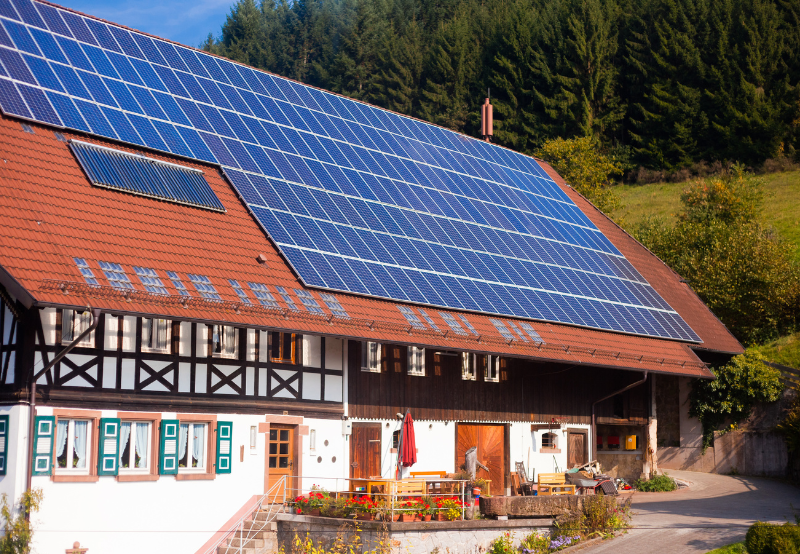 Ground-mounted utility-scale solar installations have witnessed exponential growth in the last eight years, but rooftop solar has not quite taken off despite potential benefits to consumers. The lack of effort from state-owned distribution companies (DISCOMs) to implement net metering has been one of the primary reasons for the sluggish growth of rooftop solar. 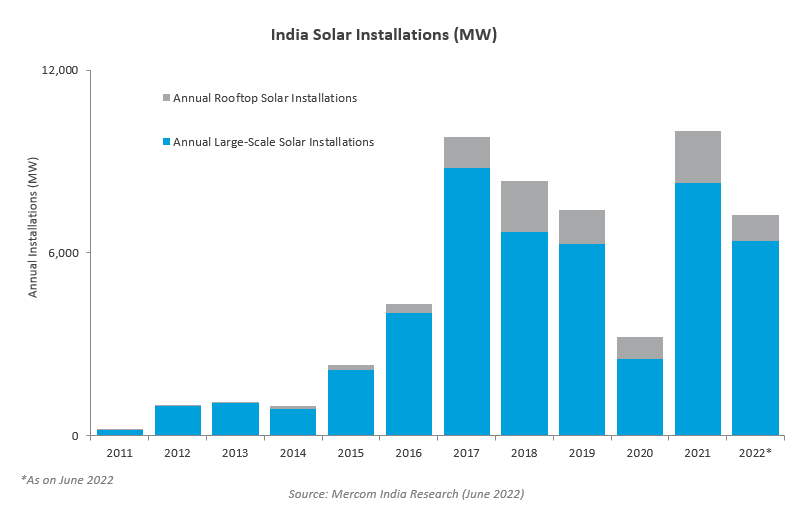 Rooftop solar systems have also failed to make a mark in rural areas, despite the incentive for DISCOMs to reduce the consumption of heavily subsidized power in rural areas.

Historically, state-owned DISCOMs have run massive losses and accumulated large debts. DISCOMs often see rooftop installations and net metering as a financial liability and do not willingly want to lose revenues from their paying customers. Due to this, the rooftop solar capacity addition has remained muted despite several advantages like minimal distribution losses, no requirement for dedicated transmission, or expensive land. Instead, inconsistent policies and tedious installation procedures have stymied the growth.

Uncertainty over net metering festered for almost two quarters in 2021, with the government proposing drastically cutting net metering for rooftop systems to 10 kW in December 2020, which was earlier capped at 1 MW. Stakeholders believed the government’s proposal would destroy the rooftop solar market. After severe opposition and representations by the industry, the government permitted net metering to the prosumers for loads up to 500 kW or up to the sanctioned load, whichever is lower.

To make it attractive for a group of households in villages to install rooftop solar, the Ministry of New and Renewable Energy (MNRE) issued standard operating procedures for virtual net-metering and group net-metering.

“The adoption of solar via net-metering has been challenging due to distribution companies’ lack of transparency and time-bound implementation. Virtual net-metering would be a great step forward. However, the key is to create a uniform platform across DISCOMs to deal with seamless and successful adoption of virtual net-metering. Implementation has to be time-bound, accountable, and consumer-friendly. Policies and execution need to go hand in hand; otherwise, this will be another buzz,” said Gautam Das, Founder and CEO of Oorjan Cleantech.

The policy is aimed at tackling problems specific to rural areas. For instance, rooftop structures in villages are often not robust enough to support solar systems. Moreover, due to the initial capital expenditure, the rooftop solar system is not attractive when the DISCOM tariff is already subsidized.

However, under virtual and group net metering, a cluster of houses can install a system on panchayat land instead of households installing individual systems in RESCO/CAPEX mode. The group net-metering facility will ensure that solar generation and power drawn from the grid are adjusted proportionally among the households.

Rural India also suffers from a lack of awareness of the benefits of rooftop solar installations. “Creating awareness in an entire village and installing individual rooftop solar systems is impossible. Instead, we can talk to the village head/ panchayat personnel and install a 500 kW or 1 MW system in the village to meet its power demand,” said Divanshu Gupta, head of sales and business development, Hartek Group.

Gupta recommended that virtual and group net-metering be extended to high-rises in urban areas. “In high-rises with many apartments, installing rooftop solar systems sufficient to meet the tenants’ entire power demand is unfeasible because of the limited rooftop space. Virtual or group net metering can allow multiple buildings to find a plot of land to set up a ground-mounted project to meet their demand,” he said.

Commenting on the SOP issued by MNRE, Sunil Parikh, Chief Technical Officer of MecPower Solutions, said, “In rural areas, grid-connected rooftop solar is still not popular because of insufficient strength of roofs to bear the load of the solar system, poor financial status to afford solar system costs and longer payback due to lower retail electricity tariff. The uncertainty over grid power availability, frequent interruptions in grid power, and poor quality of grid power are also  major reasons.”

Parikh feels the adoption of solar with virtual net metering and group net metering in renewable energy service company (RESCO) or capital expenditure (CAPEX) model will be more successful if it is permitted along with battery energy storage systems.

“If grid power fails and export is restricted, the necessary safety interlocks and grid isolation can easily be developed with sensors and tools. In such conditions, the system should work as a mini-grid. The consumers will be benefited from an uninterrupted power supply. This will boost the acceptance of solar in rural areas,” he said.

Despite the government setting ambitious solar targets, the general apathy of DISCOMs towards rooftop solar has hindered the growth of rooftop solar. DISCOMs in Rajasthan recently proposed reducing the tariffs given to rooftop solar consumers connected with net metering from ₹3.14 (~$0.040)/kWh to ₹2 (~$0.025)/kWh.  DISCOMs want to procure electricity from the consumers at a lower rate but supply the same electricity through the grid to other consumers at a higher rate.

The government needs to increase rooftop solar installations if it is serious about meeting its target of 280 GW of solar by 2030. The country’s current installed solar capacity is 57 GW, according to Mercom’s India Solar Project Tracker, which means India needs to install about 27 GW of solar annually until 2030 to achieve the goal. Utility-scale solar deployment is land-intensive, and scaling projects requires sizeable contiguous land parcels. Rooftop solar does not have such constraints and could be the way for the nation to meet its target.