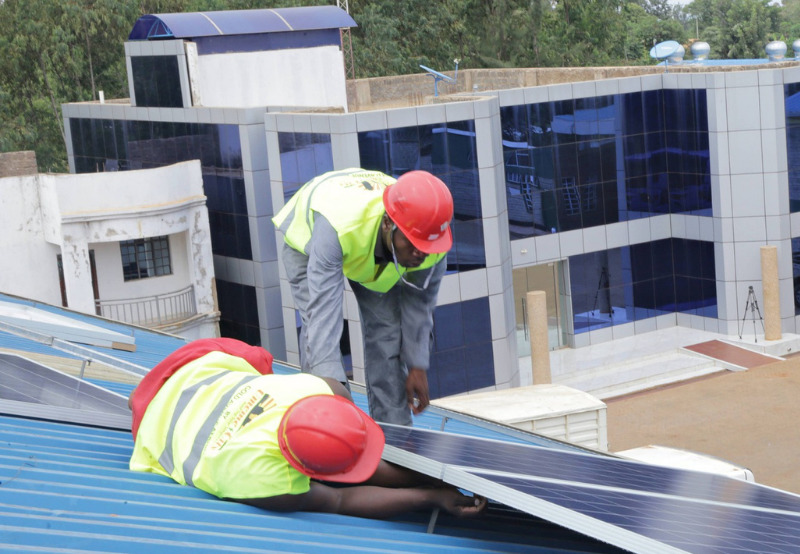 The numbers were highlighted in the National Solar Jobs Census 2020 released by the Solar Energy Industries Association (SEIA), The Solar Foundation, the Interstate Renewable Energy Council (IREC), and BW Research.

The drop in jobs was split evenly among states as many companies have not yet reached pre-pandemic employment levels. 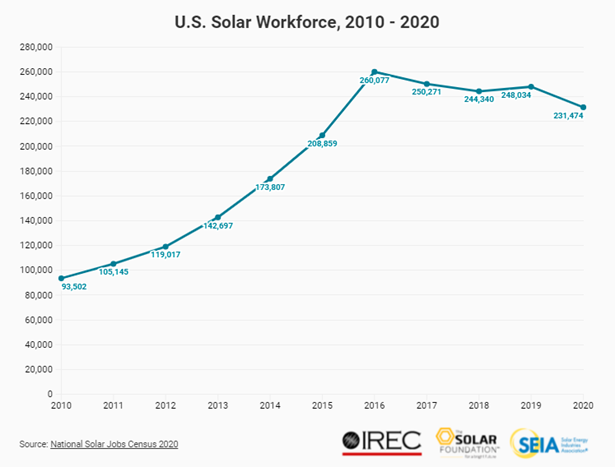 According to the report, labor productivity also increased in all three market segments – up 19% in the residential sector, 2% in the non-residential sector, and 32% in the utility-scale sector. Despite employment reductions, U.S. solar installations reached a record 19.2 GW in 2020. According to the U.S. Solar Market Insight 2020 Year-in-Review report, released by the SEIA and Wood Mackenzie, the U.S. solar industry grew 43%. 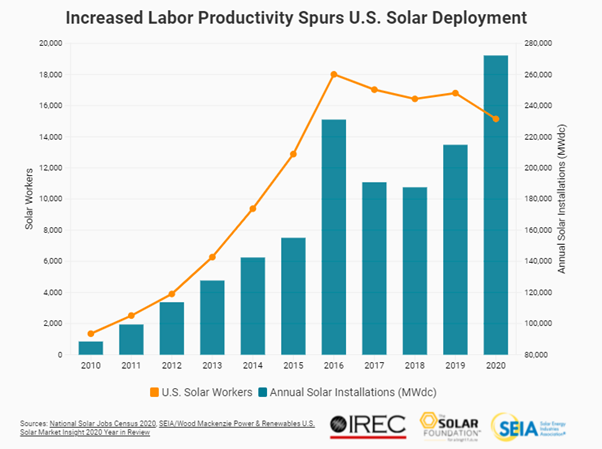 The less labor-intensive utility-scale installations contributed to a record amount of solar capacity in 2020. However, the pandemic took a toll on residential jobs in the summer and did not recover fully by the end of the year.

Meanwhile, SEIA analysis shows that the solar industry will need to reach more than 900,000 workers to reach President Joe Biden’s 2035 clean energy target. The association advocates policies that will increase clean energy deployment and lay the groundwork to hire and train those workers.

At a global summit on climate change held last month, Biden said that he proposed a huge investment in innovation in the sector to tap the economic opportunity and linked the U.S. climate response to job creation. 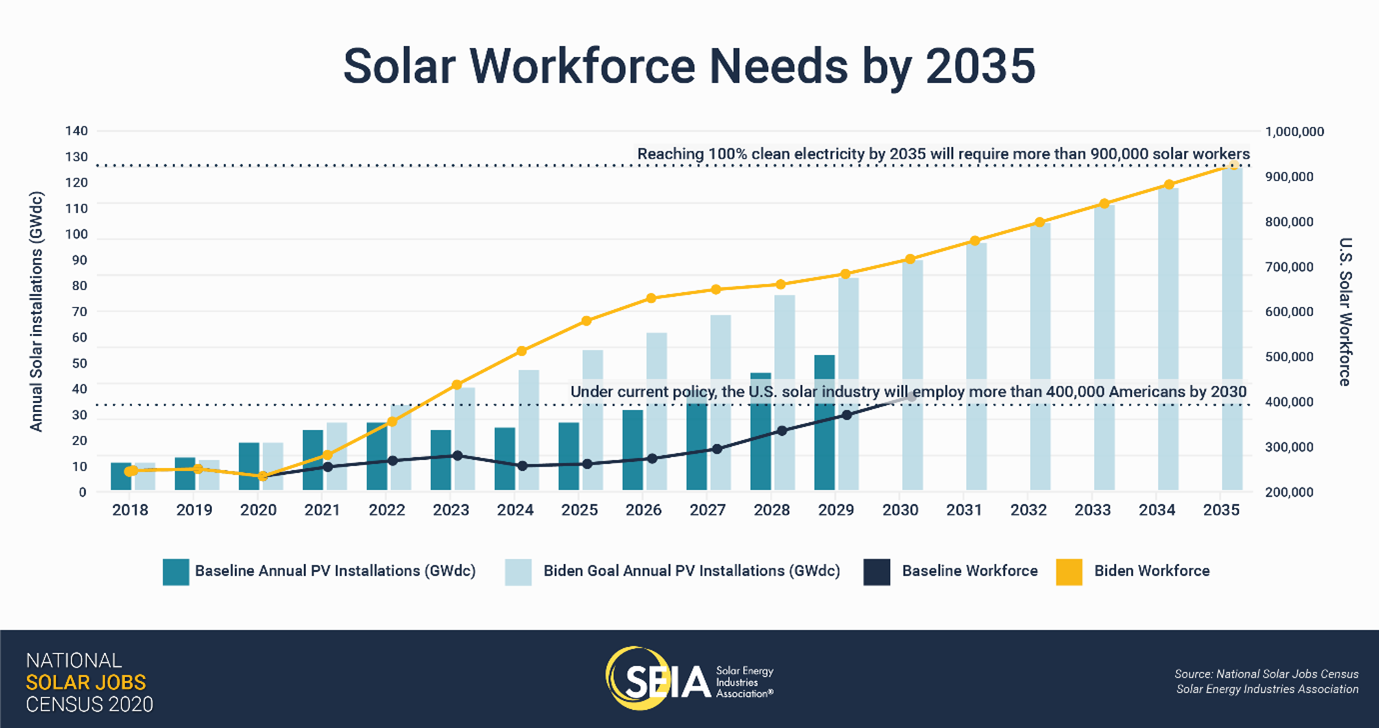 “The solar industry continues to support hundreds of thousands of jobs across all 50 states, and even during a pandemic, our companies largely were able to keep workers on the job. We now have an opportunity to quadruple our workforce, adding diversity and supporting underserved communities by taking policy steps that incentivize solar and storage deployment and provide long-term certainty for solar businesses,” said Abigail Ross Hopper, president, and CEO of SEIA.

Representing 67% of all jobs, installation and construction-related jobs continue their reign as the largest segment in the industry. Of all installation jobs, 55% were residential, 18% commercial, 8% community solar, and 19% were utility-scale. 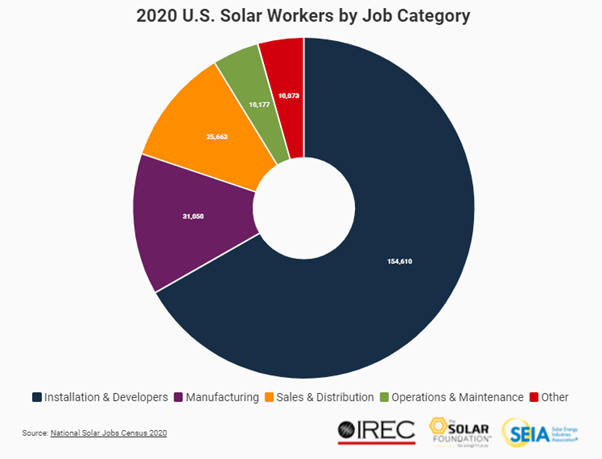 Workers in manufacturing jobs represented 14% of all American industry employment, while sales and distribution and operations and maintenance represented 11% and 4% of all jobs, respectively.

Meanwhile, the ‘other’ category comprises workers from fields like finance, legal, research, advocacy, and communications, making up 4% of all U.S. solar workers.

Collaborators of the report feel that the new figures come in at a key moment when the U.S. lawmakers are debating on infrastructure spending that could boost the solar workforce with hundreds of thousands of jobs over the next decade.

“Even as the pandemic brought unprecedented challenges, the 11th annual Solar Jobs Census shows the solar industry continues to create hundreds of thousands of high-quality jobs for men and women of all education levels and backgrounds,” said Larry Sherwood, Administrator of The Solar Foundation and President and CEO of IREC.

The Solar Jobs Census counts those workers who majorly undertake solar-related work. Interestingly, the U.S. solar industry has a unionization rate of 10.3%, which is substantially more than previously estimated and comparable to the economy-wide rate.

The report shows an increase in solar workforce diversity across almost all demographic categories, including workers identifying as ‘female,’ representing 30% of the solar workforce.

The solar industry also continues to outpace the rest of the economy in its employment of veterans, representing 8.7% of the solar workforce, compared to 5.7% in the overall economy.

Remarkably, solar occupations earn wages comparable to or better than those same occupation types in other industries. For example, wages for solar workers continue to beat other industry averages when comparing pay for positions such as construction managers, electricians, and installers.

Meanwhile, the second Covid-19 surge is wreaking havoc in India, with cases surpassing six figures daily. With the health crisis threatening to get out of control, Mercom took an in-depth look at what is transpiring on the ground to understand the situation at various project sites across the country.