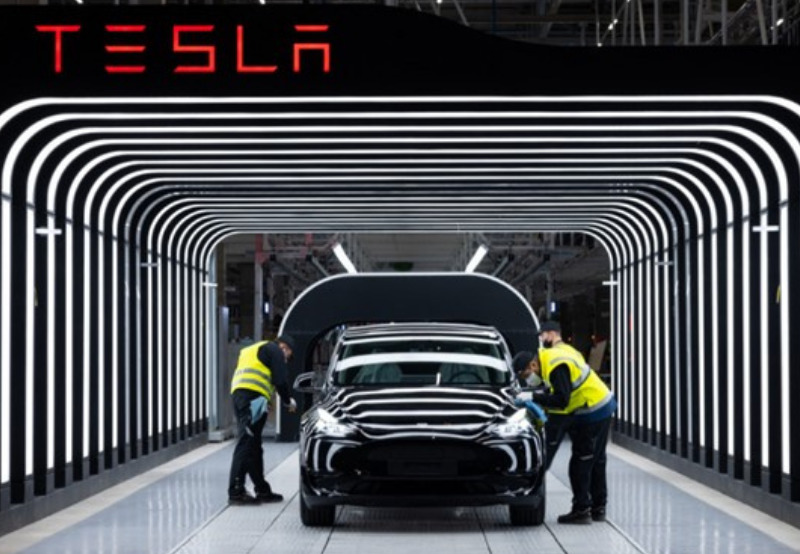 Tesla registered a record revenue of $18.7 billion in the first quarter of 2022, a year-over-year (YoY) increase of 81% compared to $10.3 billion in Q1 of last year. Growth in vehicle deliveries with a surge in average selling price contributed to the quarter-over-quarter (QoQ) stability compared to the same period in 2021.

Tesla’s total debt, excluding vehicle and energy product financing, fell to less than $0.1 billion at the end of the first quarter of 2022. The cash equivalents and short-term marketable securities increased by $0.3 billion to $18 billion in Q1, mainly driven by the free cash flow of $2.2 billion, partially offset by debt repayments of $2.1 billion.

The company registered an operating margin of 19.2% with an improved operating income of $3.6 billion in Q1.

The adjusted Earnings Before Interest, Tax, Depreciation and Amortization (EBITDA) for Q1 is $5 billion, a 173% YoY increase from $1.8 billion in the same period in 2021.

Tesla’s solar deployments fell by 48% in the first quarter to 48 MW, compared to 92 MW in the same quarter in 2021. The company stated that the decrease in deployments was mainly due to delays in importing raw materials.

Solar rooftop installations witnessed a YoY continued growth, while cash and loan sales nearly accounted for all the deployments.

Tesla has diversified the battery chemistries to optimize the products in its electric vehicles segment. More than half of the Tesla vehicles manufactured in the first quarter of the current year were equipped with lithium iron phosphate (LFP) batteries, free of nickel or cobalt. Tesla is deploying LFP batteries in most of its standard range of vehicle products and commercial energy storage applications. 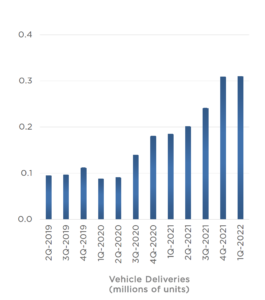 In Q1, the company noted that global supply chain, transportation, labor, and other manufacturing challenges continued, limiting the ability to run the factories at full capacity.

In addition to chip shortages,  COVID-19 outbreaks weighed on the supply chain and factory operations. Prices of some raw materials increased multiple-fold during the quarter.

While weekly production rates were strong in Q1, a spike in COVID-19 cases in Shanghai resulted in the temporary shutdown of the factory and parts of the supply chain. Though limited production has recently restarted, the situation has been monitored closely.

The deployments in the energy storage (ESS) segment surged by 90% YoY in the first quarter with 846 MWh installed capacity, mainly driven by strong Powerwall deployments. While the demand remained above capacity, Tesla’s ESS segment’s growth was limited due to ongoing supply chain challenges.

The company is also ramping production at a dedicated Megapack factory to address the rising demand in the energy storage segment.