After a few unsuccessful tenders that failed to attract developers, TANGEDCO received technical bids aggregating 3,700 MW in response to the 1,500 MW solar tender. During the financial bidding for the 1,500 MW tendered by TANGEDCO, the tariffs quoted ranged between a high of ₹4 (~$0.0618)/kWh and a low of ₹3.47 (~$0.0537)/kWh.

A TANGEDCO official told Mercom, “TNERC’s approval was necessary; ₹3.47 (~$0.0537)/kWh wasn’t quoted by all bidders, but they had agreed to sign PPAs at that price. The approval ensures there will be no future litigation concerning solar tariff for these 1,500 MW.”

Mercom’s source at NLC India said, “we are happy that the PPAs have been entered into, now project construction can begin, we had already put out an engineering procurement construction (EPC) tender for developing 709 MW in Tamil Nadu.”

An Atha Power executive told Mercom, “PPAs should have been signed as soon as bidding concluded and developers agreed at the lowest bid, this two-month delay will lead to escalation in procurement costs for us.”

When asked about the difference in bids in Gujarat 500 MW and this tender, the Atha Group executive said, “solar radiation, ease of payment, payment security, all these factors play a hand in developers’ deciding how low to go.”

In the recently concluded Renewable Energy Expo conference, government officials were pointing to the recent low bid of ₹2.65 (~$0.0413)/kWh in the GUVNL auction as a sign that low bids of around ₹2.50 (~$0.0383)/kWh were still viable.

Raj Prabhu CEO of Mercom Capital Group said, “no two bids are equal as there are so many factors in play like – insolation, DISCOM ratings and payment history, park vs. non-park, land and others which decide the tariff level. I hope the government agencies understand this and don’t make this an issue going forward. Solar companies also need to be more transparent and share data to help government agencies understand the differing factors.”

The Chairman of Raasi Green Energy and President of Indian Solar Association (ISA), Mr. C. Narasimhan, told Mercom, “prices will vary slightly from state to state, we cannot just compare Gujarat rates to Tamil Nadu rates.” If you see, prices (solar tariffs) have been gradually declining in Tamil Nadu. Earlier, solar tariff was nearly ₹8 (~$0.123)/kWh which came down to ₹7.02 (~$0.108)/kWh, then to below ₹5 (~$0.077)/kWh and now it is ₹3.47 (~$0.0537)/kWh. This shows that developer interest and confidence in the state is growing.

Many constraints have been simplified once the state joined the Ujwal distribution company (DISCOM) Assurance Yojana (UDAY) program. Earlier, the sentiment was negative due to payment issues by TANGEDCO, and the massive debt it had accumulated over the years made lenders wary. Now, all this has changed, State Bank of India (SBI) and other major lenders are focusing on lending to Tamil Nadu solar project development and solar tariffs will go down even lower in coming auctions, added Mr. Narasimhan.

“I would also like to say that, soon the TANGEDCO will come out with a 500 MW solar park tender where the upper tariff limit will be ₹3 (~$0.046)/kWh, this shows that tariffs in Tamil Nadu are also going down in tandem with elsewhere in India, it’s just that it takes time to boost the confidence of developers,” commented Mr. Narasimhan. 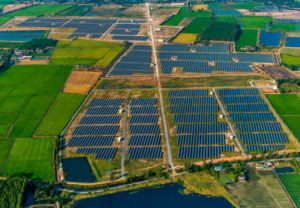