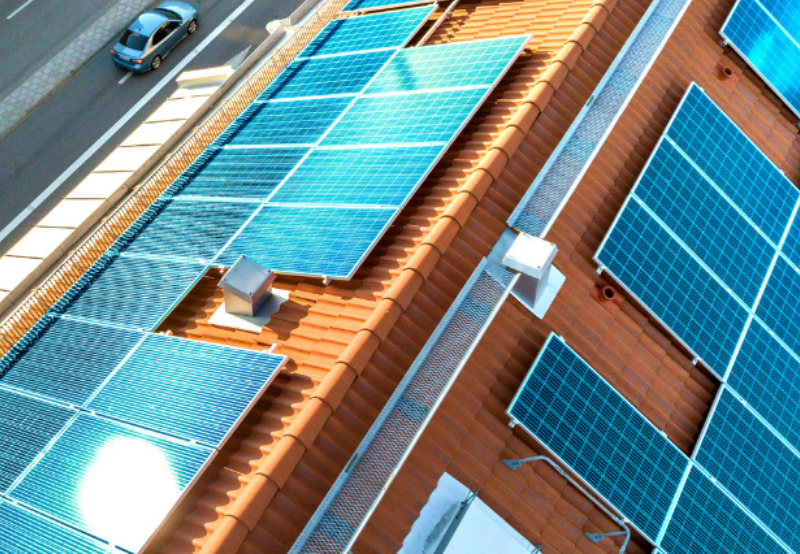 Rooftop solar installations could exceed 2,000 GW globally with more than 1,000 GWh of energy storage capacity by 2050, BloombergNEF and Schneider Electric have said in a recent report.

The report ‘Realizing the Potential of Customer-Sited Solar’ finds that rapidly falling costs of solar technology have already made it economical for homes and businesses to generate their own power in some markets. As a result, adoption has already taken off, with more than 2.5 GW of residential solar added in 2020 alone. 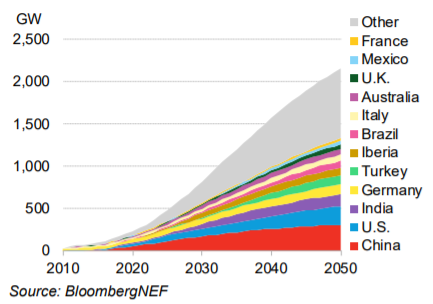 “Customer-sited solar is a huge opportunity that’s often completely overlooked. Thanks to falling costs and policy measures, it is already rapidly deployed in some markets. Its massive scale-up is highly likely,” said Vincent Petit, Head of the Schneider Electric TM Sustainability Research Institute. “This is vital for decarbonizing the power sector and offers huge additional consumer benefits. It’s time to embrace this transformation.”

Solar adoption by households and businesses is driven by economic cases like high internal rates of return (IRR) or short payback periods. Policymakers are introducing targeted incentives to create favorable market conditions and bring forward deployment in markets where economic tipping points have not been reached.

The report suggests that a critical consideration at the early stage of market development is to avoid an unsustainable boom. Policy designs should account for the falling cost of solar over time and moderate support to reflect these changing dynamics.

According to the report, there is a strong economic case for adding solar during the construction of new buildings. It argues that soft costs, such as marketing and sales costs and labor and construction costs, can be reduced while the benefits remain the same. 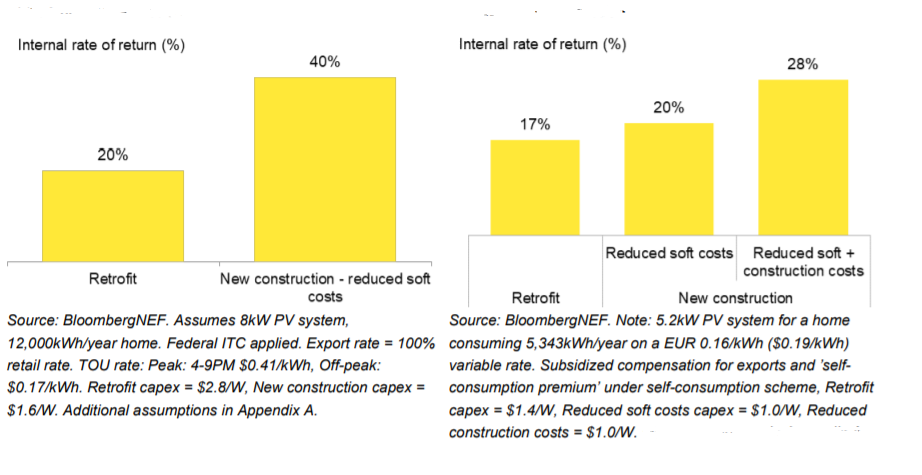 The report recommends that policymakers and regulators must gradually shift their emphasis toward adopting energy storage as solar markets develop and mature. High levels of solar adoption can lead to excess energy produced during the day, which can be stored for use during evening hours with the addition of energy storage systems.

“The evolution of customer-sited solar is to add some form of flexibility, which can unlock a much higher penetration of solar,” said Yayoi Sekine, BNEF’s Head of Decentralized Energy. “The most obvious form of flexibility is batteries, but energy storage will come in many forms, including shifting demand and using electric vehicles.”

To encourage the adoption of energy storage, policymakers and regulators should include tools such as adjusted export rates, time-of-use retail electricity rates, enabling payments for storage to provide grid services, and implementation of demand charges.

Reducing export rates to 35% of retail tariffs in California would shift the emphasis over to solar systems paired with storage, which would still generate a 13% IRR. However, worsening economics of both solar-alone and solar-plus-storage would change the economic rationale of customers to add storage to new solar installations. Adding aggregation payments for batteries would boost IRRs to 22.8% for commercial and industrial installations, making solar-plus-storage more attractive than solar alone.

Earlier this year, the Lawrence Berkeley National Laboratory (LBNL), in its ‘Tracking the Sun’ report 2019, had found that the installation prices for non-residential rooftop solar systems in the United States fell by 4% in 2019.