REC Silicon, a leading producer of advanced silicon materials, posted a revenue of $43.2 million in the fourth quarter (Q4) of the calendar year (CY) 2021, up 20% compared to $36 million during the same period last year.

The earnings before interest, taxes, depreciation, and amortization (EBITDA) stood at a loss of $400,000 for Q4 2021, which was an improvement of 89% compared to the loss of $3.7 million in the last quarter. The EBITDA did show more loss compared to $1.9 million profit during the same period last year.

The company reported an EBITDA of $9.3 million contributed by the semiconductor materials segment during Q4 2021, up by 416% compared to $1.8 million in Q3 2021. The increase in EBITDA contribution was primarily due to higher production volumes of intermediate products and lower electricity prices during the quarter. 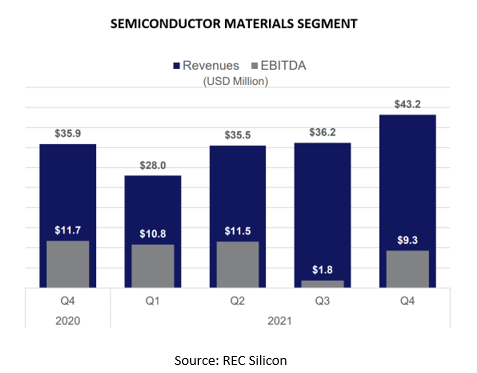 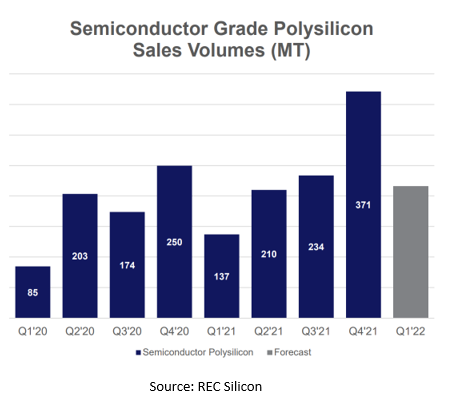 The company noted that in Q4 2021, polysilicon prices increased in the early part of the quarter by 10% to about $36.8/kg and ended the quarter with $30.5/kg as demand in the year-end fell and wafer producers reduced inventory. Polysilicon supply in China was stable as most producers focused on inventory control, with anticipated seasonal declines in demand at the end of the year. Polysilicon prices remained significantly higher at the end of 2021 compared to prices of $11.1/kg at the beginning of 2021.

Solar grade polysilicon prices increased to $32/kg at the beginning of the first quarter of 2022. Prices are expected to remain stable in the first part of the year. Polysilicon supply will increase through 2022 as new capacity comes online.