The cumulative rooftop solar installed capacity totaled 7.1 GW at the end of 2021.

India added 1.7 gigawatts (GW) of rooftop solar in CY 2021, the highest ever recorded in a calendar year. Installations were up 138% compared to the CY 2020, according to Mercom India Research’s newly released “Mercom India Rooftop Solar Market Report Q4 and Annual 2021 .”

According to the report, at the end of Q4 2021, cumulative rooftop solar installations reached over 7 GW. 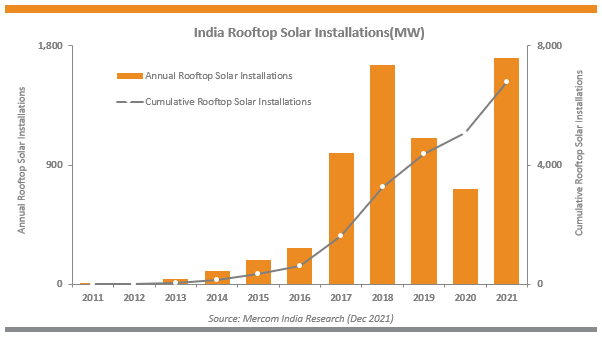 “The rooftop solar market in India had its best year, largely due to the pent-up demand from 2020, which experienced a severe decline due to COVID-19. Certainty around net metering regulation helped along with demand from consumers across all segments – residential, commercial, and Industrial. Increase in component costs will dent demand in 2022, but we still expect positive growth this year,” said Raj Prabhu, CEO of Mercom Capital Group.