Researchers at the National Renewable Energy Laboratory (NREL) have conducted the first global assessment of various approaches used to manage solar photovoltaic (PV) modules at the end of their life spans. The study was published in the scientific journal Nature Energy.

According to the study, the average lifespan of solar panels is 30 years, and currently, we do not have a process to manage the solar modules at the end of their lifespans. The volume of modules not in use is estimated to account for nearly 80 million metric tons at the end of 2050, which is a huge number in itself.

It is not only the quantity that poses a challenge, but the nature of the waste also requires attention. Currently, there is no such process that can take care of recycling the valuable parts of the solar panels and mitigate the toxic ones.

Commenting on the need to recycle solar panels, Garvin Heath, a senior scientist at NREL, said, “Solar energy is a major part of the energy transition. We must be good stewards of these materials and develop a circular economy for solar modules.”

“It provides a succinct, in-depth synthesis of where we should and should not steer our focus as researchers, investors, and policymakers,” Heath added.

The study focused on the recycling of crystalline silicon, which is used in 90% of installed solar PV modules in a very pure form. The silicon accounts for nearly half of the energy produced and half of the cost to produce solar PV modules, but it accounts for only a small portion of the mass. The value of crystalline silicon is determined by its purity.

Speaking on the recycling process, Timothy Silverman, a hardware expert at NREL, said, “It takes a lot of investment to make silicon pure. For a solar PV module, you take these silicon cells, seal them up in a weatherproof package where they’re touching other materials, and wait for 20 to 30 years—all the while, solar PV technology is improving. How can we get back that energy and material investment in the best way for the environment?”

The study noted that right now, only a few countries have solar panels recycling regulations in place, and others have started to consider solutions. As of now, only one silicon recycling facility exists in the world due to the limited amount of waste being produced today.

Based on the findings, the researchers recommended research and development in this area to reduce the recycling costs and environmental impacts of the process. The researchers said that the recycling of silicon wafers is tough as they often crack and are less likely to meet the required standards for direct use. For recovering high-value silicon, the researchers said that there was a need for research and development of silicon purification process.

The researchers also stressed the need to take into account the environmental and economic costs of the recycling process, and these should be explored using techno-economic analyses and life-cycle assessments.

As per the study, finding ways to avoid waste products is a good starting point, and this includes finding ways to make solar panels last longer and help them produce electricity efficiently.

“We need research and development because the accumulation of waste will sneak upon us. Much like the exponential growth of PV installations, it will seem to move slowly and then rapidly accelerate. By the time there’s enough waste to open a solar PV-dedicated facility, we need to have already studied the proper process,” added Silverman.

In November last year, researchers at the Deakin University came up with an innovative way to extract silicon for discarded solar panels and turn it into nano silicon for batteries. The innovation was expected to solve the biggest problem that is preventing photovoltaic cells from being recycled.

Meanwhile, India has been working on a National Resource Efficiency Policy aimed at promoting the use of secondary raw materials that has emerged as a strategy for ensuring that the potential trade-off between growth, resource constraints, and environmental well-being can be minimized. An overarching national policy framework is required to mainstream resource efficiency across all sectors and regions of the country. This will require the supply and use of newer materials for manufacturing different solar PV technologies while maintaining cost competitiveness in the sector, and in this regard, resource efficiency will be a key to achieve these objectives. 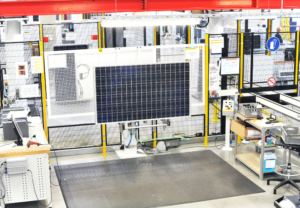