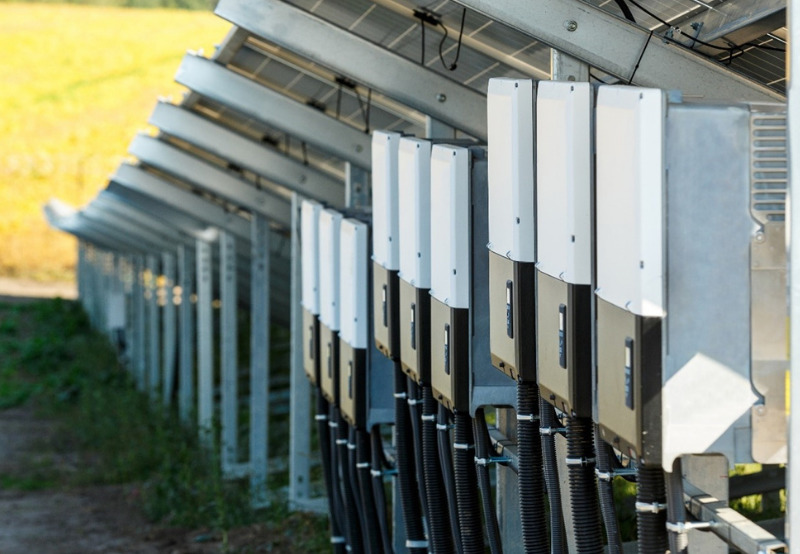 On Thursday, June 17, Mercom held a webinar on ‘Redefining Global PV Project Standards – Huawei FusionSolar 8.0 Gemini’ to discuss the latest trends and technologies in the Indian photovoltaic (PV) industry and the ways to achieve a better levelized cost of electricity (LCOE) amidst the current scenario of rising component costs. 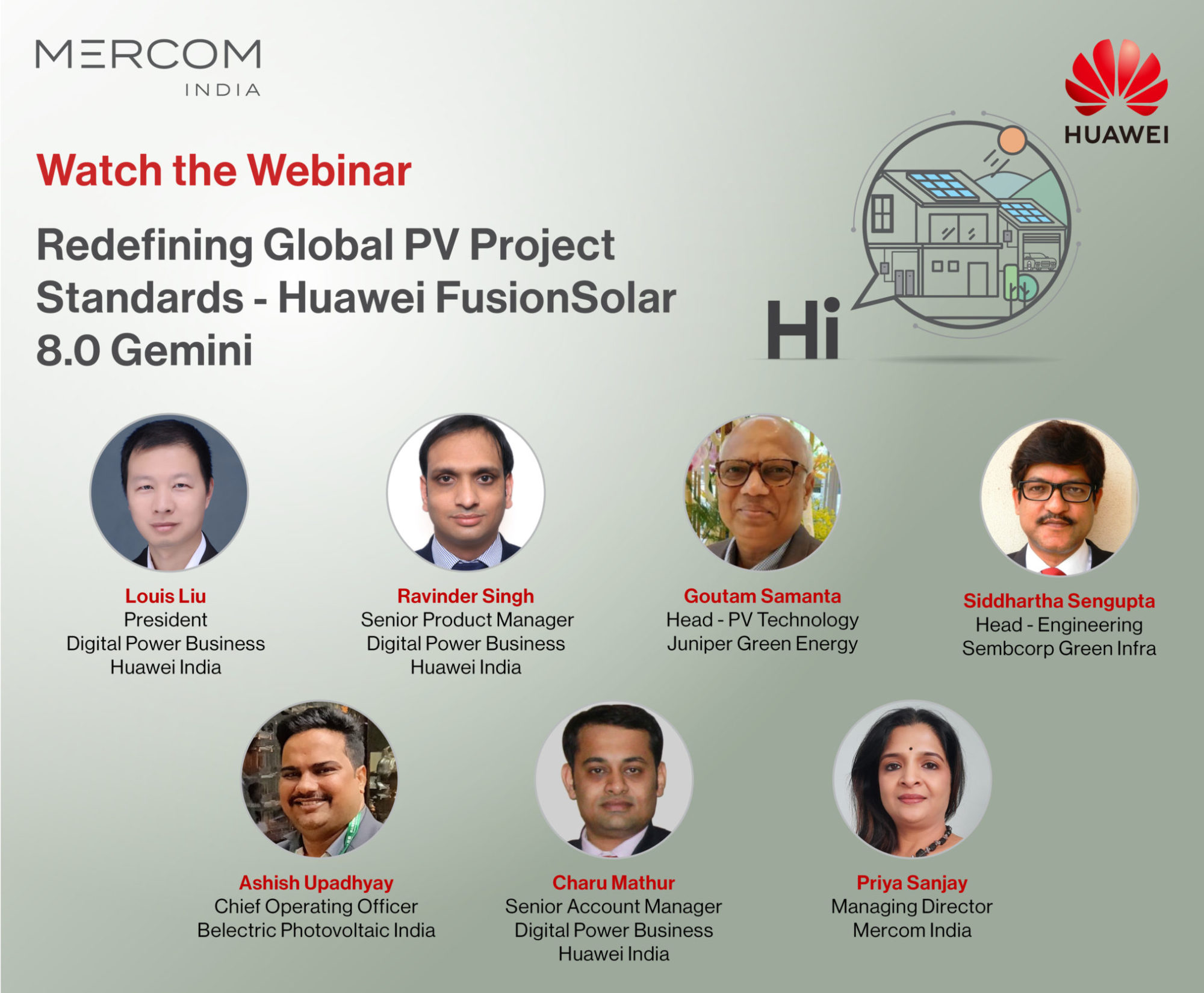 The program started with a welcome speech by Liu addressing the panel and attendees. It was followed by Singh’s presentation, which introduced the panel to ‘Huawei FusionSolar 8.0 Gemini’, ‘Huawei Smart DC System’, and explained how it could help solar projects achieve better LCOE.

Singh’s presentation was backed up by a presentation by Samanta with case studies illustrating the features and performance of smart string inverters.

The webinar carried on to a panel discussion on ways to reduce the LCOE of solar projects and the hands-on experience of the developers and EPC service providers.

When asked about the challenges in solar project development due to the rise in component prices coupled with the lockdown in most parts of the country, Sengupta said, “Many developers who are currently developing projects must have made certain assumptions while bidding, which have been proven incorrect. Fortunately, when we placed bids for our current project at ₹2 (~$0.027)/kWh, our project’s scheduled commercial operation date was 18 months down the line. This puts us in a better position. However, when coming up with LCOE assuming the project cost, we have to take a forward view and not consider the current price. Those who bid for tenders 18 months ago must have made some calculations for certain modules and inverters. But solar technology changes rapidly, and the one way to mitigate price rise is by adopting a better technology available today. Now we have better modules and inverters, and Huawei will have its new inverter in the market in a few months, which will bring down the LCOE.”

Upadhyay agreed with Sengupta and said that the last six months have been quite challenging for both developers and engineering, procurement, and construction (EPC) companies because of the pandemic.

He said, “Some technology advancement is needed to take a strategic procurement call. While taking up any contract, we strategize the use of steel because it makes up 30% of the balance of system (BoS) cost. Technological advancements mostly from 3,000 volt systems will add value once it comes in the market. Value engineering is important for higher watt peak and bifacial modules and inverters with higher maximum power point trackers (MPPTs). These kinds of small value engineering lead to cost optimization, operational excellence by reducing operation and maintenance expense and faster project execution.”

Mathur from Huawei added that there is a lot of pressure on the company as they are consultants to their clients and not mere box sellers.

He said, “When we entered in 2015-16, central inverters dominated the market, but today the industry is evolving. The assumptions taken two years ago have changed due to rising module and metal prices, and we need to find an optimal solution for our clients. Our bipolar system of +/- 1,500 voltage helps developers reduce the total cost and LCOE.”

He further added, “We consult our clients and give them ideas. When a client wants to opt for a bifacial module, we meet their financial and technical team and help them reduce their LCOE. We are helping developers match pricing, not only through inverters but as a total solution where they can go for higher power generation and reduce their CAPEX and OPEX.”

Role of technology in reducing LCOE

When asked about the role of technology in reducing LCOE, Sengupta said, “Five years ago, I did my first project with string inverters and perceived that if I do not want to compromise on the quality of my project and reduce my LCOE, then string inverters are the only way.”

He added, “We have a big project of 400 MW (AC) on 1,500 acres of land. Local clouds create shadowed areas on the project land where we immediately lose power, especially if it is a single MPPT, then the mismatch would immediately increase. But with a string inverter, it wouldn’t.”

According to him, project design should be based on the future. “India is a polycrystalline user, and now we are turning to mono PERC. But Chinese manufacturers are constantly improving efficiency and energy output. One has to foresee the benefit as a company. Futuristic designs can mitigate risks,” he added.

He said, “We implemented the first 1,500-volt system in Telangana, and once the 3,000-volt system is out, it will certainly result in a reduction in BoS and LCOE. We have to optimize the project between mono PERC and bifacial and in certain segments between string and central inverters as the land is never uniform.”

Mathur explained how the latest solution by Huawei helps in bringing down the LCOE of solar projects and further elaborated on specific pain points during installations.

He said, “The major pain point for clients is metal prices, especially with cables. When we talk about the short circuit ratio of a grid at the connection point, where the values are low, our inverters can be connected. Our research and development (R&D) teams are concerned about grid stability. These string inverters will come into the picture in the long run, especially in five years when modules start failing. The string inverters will help identify mismatch and degradation.”

Technology prediction for optimizing generation and reducing its cost

According to Sengupta, module technology will change the landscape radically, especially bi-facial modules.

“We had conducted studies in Rajasthan where we realized we could get a 10% jump from bifacial modules. The delta between the cost of mono facial and bifacial depends on the LCOE. However, bifacial is not viable in India yet as we are extremely cost-sensitive. Still, when the delta comes closer, people will shift to bifacial, particularly in desert locations where most projects are based. Next is N-type silicon cells, which don’t degrade quickly as normal cells and further optimize the LCOE.”

Upadhyay agreed with Sengupta’s take on bifacial modules and said it had already entered the markets.

While manual cleaning is one option, several robotic technologies have entered the market and provides a cost-effective method to clean solar panels compared to manual cleaning. Some of the more common robotic cleaning systems include module cleaning robots, driving robots, and AI-enabled robots.

When asked about Huawei’s response to address the needs of the developers and the products it plans to launch, Mathur stressed year-on-year innovation. “We are investing $18 billion in R&D each year for telecom and solar technologies and working on storage solutions,” he added.