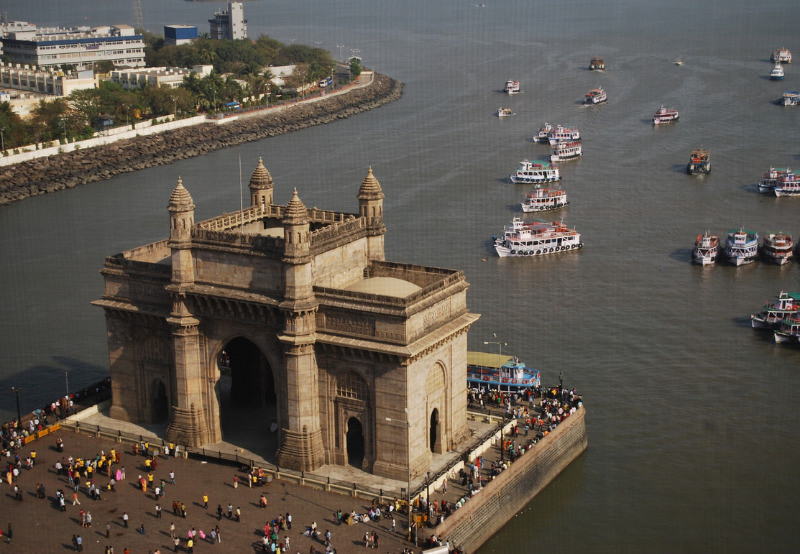 The Brihanmumbai Municipal Corporation (BMC) and the Maharashtra government announced their first-ever climate action plan, the Mumbai Climate Action Plan (MCAP), to zero out carbon emissions by 2050. This makes it the first city in South Asia to set such a timeline.

According to MCAP, rooftop solar can potentially generate 1,724 MW of power, enough to meet half of the city’s total energy demand. Currently, of the city’s total power demand of 3,400 MW-3,600 MW, solar’s contribution is a mere 0.70%. With thermal power projects contributing 95.34%, wind and hydropower 2.10% and 1.86%, respectively.

The plan highlights residential buildings to have the highest potential for rooftop solar power with an estimated generation capacity of 1,300 MW. Industrial buildings could produce 223 MW of clean power, while educational institutions could generate 71 MW. 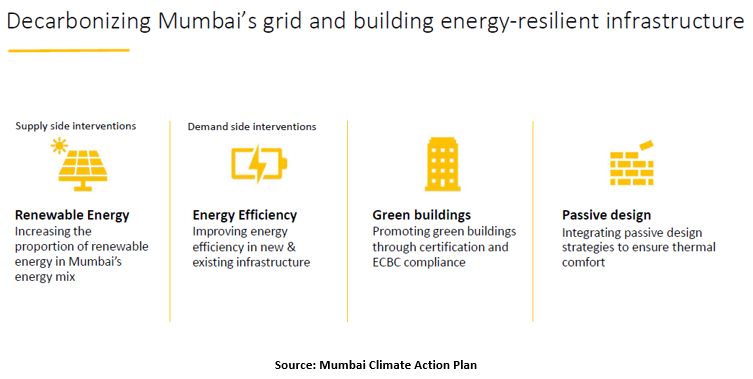 Mumbai’s rich public transport ridership is why emissions in the transport sector are lower than those of other cities. However, an increasing trend towards car ownership and ridership has resulted in Mumbai being the second most congested city globally in 2020. Besides congestion, private vehicle usage also contributes to GHG emissions, road fatalities, and air pollution.

As per Maharashtra’s Electric Vehicle (EV) policy, cities must aim for 25% electrification of public transport and last-mile urban fleets by 2025. The purchase of EVs has seen a rise from 46 to 672 between 2017-18 to 2019-20. The plan suggests incentivizing private freight players to shift towards EVs through tax exemptions, subsidies, low-carbon freight zones, and supporting policies. It also recommends charging infrastructure to be increased at instituting charging stations at every bus depot, in streetlights and utility poles located in urban areas, particularly near multi-unit dwellings and central business districts and shopping malls. The state EV policy also mandates Mumbai set up 1,500 charging stations by 2025.

The city is already in the process of electrifying 45% of the Brihanmumbai Electric Supply and Transport (BEST) buses by 2023 and aims to cut down 166,000 tons of carbon emissions annually.

A WRI India analysis undertaken for 2015-2020 as part of the Mumbai Climate Action Plan, 2021 revealed that particulate matter, especially PM10 and PM2.5, and nitrogen dioxide (NO2) were the major pollutants in Mumbai. The pollution was contributed primarily by vehicular emissions, dust from construction sites, industrial units, and power plants.

MCAP proposes a two-state solution to tackle the issue of air quality. The first stage includes assessment, sector-specific actions, implementation, and enforcement, along with ward-level plans.

Stage two, which will happen parallel to stage one, includes monitoring mechanics and data analytics, an early warning system within BMC for prediction and increased preparedness, and forecasting and conducting studies to assess exposure levels.

Mumbai has three waste disposal sites: Mulund, Kanjurmarg, and Deonar. As per the latest figure, the city produced 6800 tons of waste per day, of which 73% was organic wet waste. The emissions from the water sector contributed 7% of overall emissions.

Mumbai has lost 43% of its green cover in three decades since the 1980s. Currently, it has a per capita accessible open space of 1.08 sqm/person, much lower than the Urban and Regional Development Plans Formulation and Implementation guideline of 10-12 sqm/person for Indian cities. With a green cover of merely 12.3%, Mumbai has one of the lowest percent areas within the municipal limits identified as green. Most affected areas are home to many vulnerable communities, with Bhandup and Mulund having a 73% and 54% slum population, respectively. In the absence of open spaces, such areas become urban heat islands.

MCAP suggests science-backed tree planting in high climate risk-prone areas to tackle this issue, ensuring species selection and nature-based solutions that protect against any biodiversity losses. The plan also proposed involving citizen and community leadership at all stages of planning, design, and implementation of open spaces.

In the last ten years, the city witnessed six heavy, five very heavy, and four extremely heavy rainfall events. As per the Brihan Mumbai Storm Water Drainage report, which suggests measures for augmenting the stormwater drainage system, the city can handle 25mm per hour rainfall during low tide. If the current trend of increasing extreme rainfall continues, efforts towards flood mitigation must be scaled up drastically.

In the recent state budget announcements, Maharashtra Finance Minister Ajit Pawar proposed funding of ₹2.53 billion (~$33.12 million) for program expenditure for the Environment and Climate Change Department, in line with the state’s objective to help expand the renewable capacity.