The Indian Solar Manufacturers Association (ISMA) filed a new anti-dumping petition against solar imports from China, Taiwan, and Malaysia with the Directorate General of Anti-Dumping (DGAD), Ministry of Trade and Commerce, requesting levy of interim duty on importers. As per Mercom’s reporting, the Ministry of Trade and Commerce has yet to accept or send official notification regarding the petition, which was filed on June 5, 2017.

When contacted, a high-ranking official at Ministry of Commerce and Industry said, “a review of the situation will be carried out, there will be comparisons based on changing scenarios and then the Ministry will either give a go ahead or state otherwise.”

For a historical context, this is the second such case being filed by the manufacturers after the previous case which was filed in 2012 against solar cells and modules produced by China, Taiwan, Malaysia and The United States was eventually dismissed in 2014 by the Indian government even though the Ministry of Commerce had recommenced anti-dumping tariffs in the range of $0.11 (~Rs.7.08) to $0.81 (~Rs.52.10) per watt.

A trade case against India was filed with the World Trade Organization (WTO) by the United States which claimed that India’s localization (domestic content requirement (DCR)) rules discriminated against its manufacturers. It should be noted that the DCR case came after anti-dumping case was filed against the U.S. by India in a retaliatory move. Mercom wrote a detailed analysis how this was a bad move especially after Ontario (Canadian Province) lost a similar case against EU and Japan. Overall, this was a self-inflicted wound. 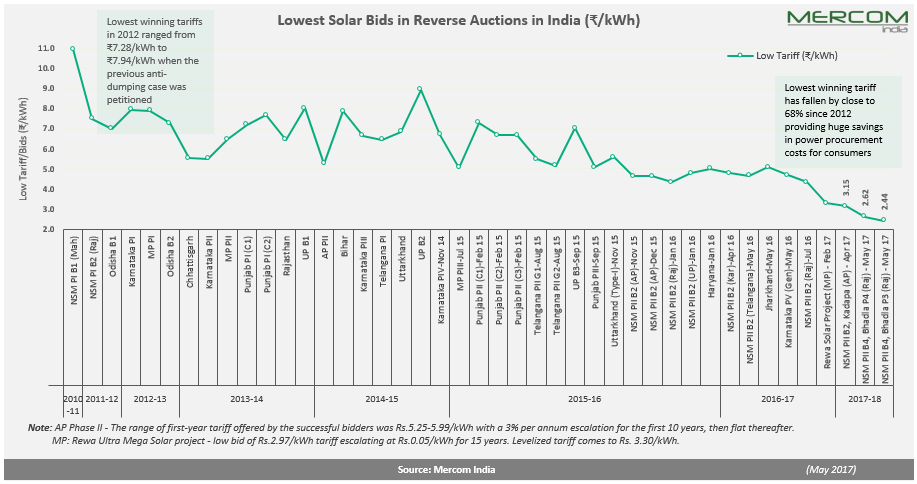 India as expected lost the DCR case in WTO and along with it the DCR tenders waned. Manufacturers who are dependent on this market have decided that they have nothing to lose and filed the anti-dumping petition. A similar but much more complicated case is playing out in the U.S. where Suniva a local module manufacturer filed an anti-dumping case against Chinese manufacturers after it filed for Chapter 11 bankruptcy. Suniva used a unique section 201 petition under the 1974 trade act which would send the case to President Trump’s desk to implement anti-dumping tariffs if injury is proven. The situation is very dangerous and will adversely affect the U.S. solar project development if Suniva wins the case. Anything can happen when it goes to President Trump’s desk. This is just an example of how a few companies can rattle the markets.

In India, the government should not have given false hopes to local manufacturers who were completely dependent on the DCR market by hinting that there are supportive policies and subsidies coming along with a steady stream of DCR projects. This gave manufacturers hope and they have continued to wait for the business that never came. Even public-sector units (PSUs) are shying away from DCR markets as no one wants to willingly pay 10-20 percent more for domestic panels. As a result, tenders under DCR category have mostly been either withdrawn or cancelled, negatively affecting local manufacturers. Mercom reported, the Solar Energy Corporation of India (SECI) cancelled DCR tenders worth 150 MW at Bhadla and retendered them under the Open category. 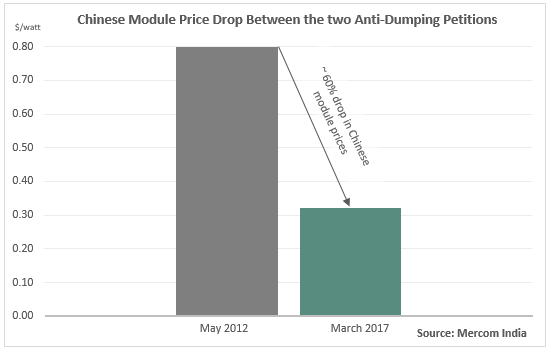 “The SECI is the solar project implementing agency in India, when it started shelving DCR projects the manufacturers had no way other than to file a petition,” stated an executive at Saatvik Green Energy. The executive further added, “If imports are cheaper than what’s produced in the country how can the local manufacturers flourish, cheap modules from China leave no space for competition, if you take into consideration a MW-scale project, most developers will find the Chinese modules more feasible due to their low price and it is not good for us, there should be a limit to the extent they can export to India or a duty should be levied to keep dumping in Indian markets in check.”

“If such a duty is not levied these countries will keep on dumping in India and this might be good for the short-term wherein project costs go low, but in the long-term it will create a vacuum wherein there will be very few indigenous manufacturers and the entire sector will be dependent on imports from other countries, it’s not a good picture and moreover levying of anti-dumping duty will provide Indian manufacturers breathing space as imported module prices will go up,” stated a source at MoserBaer Solar Limited.

“If you want your manufacturers to expand their capacity, make laws aiding them,” stated a source at one of the largest module manufacturing firm in India. The source further said, “earlier the DCR category ensured local manufacturers had a set market, but now due to WTO ruling even that’s gone.”

If the local manufacturers have to survive and the government wants the well-being of the Indian solar sector it must give a go ahead to anti-dumping duty, stated a source at Indosolar.

A Ministry of New and Renewable Energy (MNRE) official told Mercom, “This is not the first time that there is a hue and cry against anti-dumping. In 2012, a case was filed against the US, China and European Union; then in 2014 due to manufacturers’ demand the Ministry of Trade and Commerce gave a go ahead to an anti-dumping petition, but after two years of investigating the issue and mulling over the findings the petition was scuttled by Ministry of Finance.” The official further said, “at that time the local manufacturers were sure that with the target of 100 GW set by the new government they had enough of a market to thrive, but now the WTO ruling has changed the dynamics.”

When asked how the MNRE perceives this situation, the official stated, “we believe in the people getting benefits, whichever way the people get cheap power it’s okay with us, and we know this administration up till now has made some good decisions, we are hoping whatever will be done, it will benefit the consumers as well as everyone else involved in the sector.”

“In all probability, the Government is highly unlikely to disrupt the project development activity right when it is taking off and willingly create uncertainty in the markets when investors are warming to India’s solar sector. Most of the tariff decline over the years correlates with fall in in Chinese module prices. The recent Bhadla solar park auction witnessed a record low tariff of Rs.2.44 (~$0.038)/kWh lower than coal tariff in many instances and it is inconceivable that the Indian government will pursue this case which would make the solar power procurement costs higher,” said Raj Prabhu CEO and Co-founder of Mercom Capital Group.

Domestic solar manufacturers meanwhile are waiting to see if the petition will get accepted. For context, India installed 998 MW in CY 2012 when the last anti-dumping case was filed, installations are expected to reach approximately 10 times that in 2017. This is not the time to mess with the markets.