With limited ability to reduce prices of modules and inverters, developers are trying to cut costs on other equipment 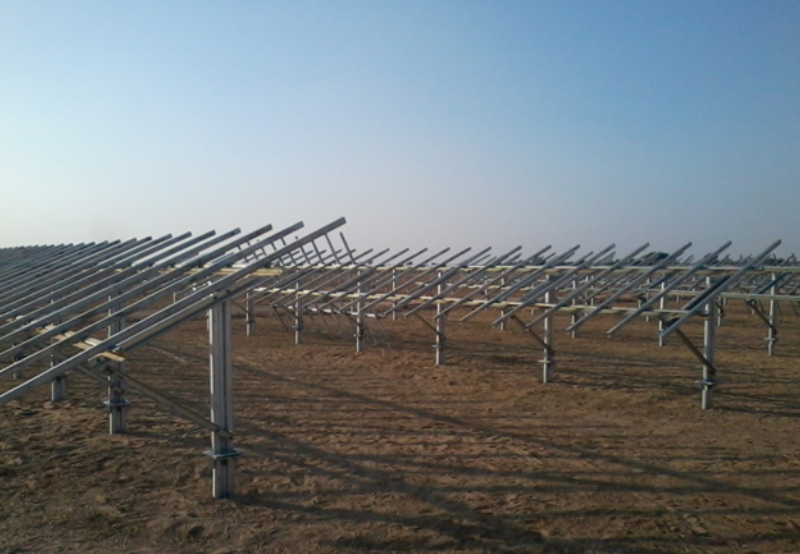 Module mounting structures are the backbone of any solar photovoltaic (PV) energy project. Good quality mounting structures on a ground-mounted or rooftop solar project not only helps maintain the optimum generation; these structures need to withstand the weight of solar panels, high wind speeds, and varying temperatures. Lately, aggressive bidding has taken a toll on mounting structures as the quality is being sacrificed to cut costs, which could have a negative consequence on hundreds of solar projects that are supposed to last 25 years in any weather.

This year, there were numerous cases in Odisha where cyclone Fani damaged rooftop as well as ground-mounted solar projects. Similar incidents have been reported from Tamil Nadu and Rajasthan. Unlike other equipment deployed in solar energy projects such as modules, inverters, and cables, module mounting structures require customization based on the topography of the land, module design, and the climate of the region. According to mounting structure suppliers, these account for anywhere between 3% to 5% of the total cost of a solar project and are a crucial part of the balance of system (BoS).

“There is an industry-wide concern that several` companies are compromising on module quality, which could lead to the collapse of structures and turn the perception of consumers and investors negative about solar project investments. Module suppliers are blaming the pressure from EPCs and developers who are in turn pointing fingers at the government agencies who they say are forcing their hand with low tariff caps and low bid matching,” said Raj Prabhu, CEO of Mercom Capital group.

Mounting structures are also expected to have excellent electrical and thermal conductivity and should be available in different thickness to carry a heavy load, apart from being corrosion-resistant and durable, considering the long life of solar projects.

However, due to aggressive bidding in the industry, mounting structure suppliers are feeling the heat. Through interaction with stakeholders in the industry, Mercom found that some developers are cutting corners on these structures. For example – the standard thickness for the structure used to range between 2mm or 3mm, but mounting suppliers are now being pushed to make structures with less than 1 mm thickness having 350 (MPa) tensile strength.

Moreover, EPC contractors are also finding it difficult to maintain the quality of the solar projects due to the corrosion of structures which is affecting power generation – a result of cutting cost while compromising on quality.

Talking about the increasing pressure on mounting structure suppliers to reduce costs, Basant Jain, CEO of Mahindra Susten commented, “The current trend of constantly falling tariffs has brought about a price war in BoS costs. Since the mounting structure is a major part of the BoS, the pressure of reducing the cost is felt to be the highest for these.”

Further, elaborating on the importance of quality mounting structures, Jain said, “In the project design life of 25 years, a structure undergoes many cycles of dynamic loading. The wind being a major reason for the failure of module-mounting structures, it is extremely important to consider all the possible worst-case scenarios in design. Also, being exposed to repeated rainfall and humid weather, poor quality of the material will make it susceptible to accelerated corrosion, thereby not allowing it to serve its complete life.”

Other EPC companies shared similar beliefs about the higher competition among developers leading to degrading quality of solar plants. the engineering team at Enerparc, a solar EPC company, said “The pressure of quoting low tariff from developers is ultimately resulting in not only quality of BOS but entire plant including modules and inverters. To a certain extent, the price pressure is resulting in some innovative solutions, but the overall impact is that the quality of the plant suffers greatly.”

Diligent design practices and rigorous testing of mounting structures cannot be overlooked. “Design that considers the life of the plant along with the environmental factors and best engineering practices (such as wind speeds, wind tunnel tests, life cycle tests for the components used), usage of new materials with adequate testing, better sourcing, quality monitoring of raw materials – ensuring the right products are used – these can ensure quality mounting structure procurement,” Ravikumar added.

Harshal Akhouri, the co-founder and director of Strolar Mounting System, a mounting structure supplier, said “Since 2008, the Indian steel industry is under pressure due to the falling prices in steel and under very intense competition. To counter this, the steel companies have tried to bring their cost down to match the pricing, and solar is no different. While economies of scale could work in negotiating the price of modules, inverters, and cables by ordering large quantities, you cannot do that in case of mounting systems. Every single project is a different design which makes mass production difficult. To meet the cut-throat competition and the wafer-thin margins, the quality of the steel is compromised. It can be in the form of the grade of steel or thickness or even the coating thickness, which may hurt the long-term durability under tough climatic conditions. A case in point being that of Punjab, Rajasthan, and now Odisha. While you have testing facilities and approval norms for modules, inverters, and cables before they make it to the market, unfortunately, there are no regulatory authorities in place for mounting systems.”

“Large-scale professional developers are relatively more careful in terms of procuring mounting systems and have third-party approval systems well in place, but there are also developers who knowingly use mounting systems of sub-par quality to make margins. One solution to reduce the costs of mounting structure is standardizing the system and streamlining logistics. For one of our larger clients, we have developed standardized mounting system designs which were deployed across various cities in India through warehousing systems. This reduces human resources, timelines, and the cost of implementing the systems,” Akhouri added.

To add to the current issues, an anti-dumping case has been filed against module mounting structure components recently, including aluminum and zinc-coated flat products originating from China, South Korea, and Vietnam.

The National Solar Energy Federation of India (NSEFI) recently wrote to the Ministry of New and Renewable Energy (MNRE) expressing its concerns over the levy of anti-dumping duty on aluminum and zinc-coated flat products.

The Directorate General of Trade Remedies (DGTR) is soon going to issue its preliminary findings in the matter. According to NSEFI, approximately 49 GW of solar projects are under various stages of development, and in the next 18 months, they would require up to ~1,500,000 tons of aluminum and zinc-coated flat products.

NSEFI has argued that if a duty is levied, solar PV project developers will raise the claims of tariff adjustment citing the ‘Change in Law’ clause. The entire process of negotiation is then likely to take a long time and adversely affect the project pipelines and the construction timelines across the country. If the anti-dumping duties are imposed on mounting structures, it could result in an increase in components costs and put further pressure on projects.

“While mounting suppliers are facing price pressure, which is resulting in compromised quality, the anti-dumping case, if it goes through, could pose supply issues. Unless regulators are careful; this is a perfect storm that can bring down projects if the structures cannot hold up,” added Prabhu.

The solar industry needs to focus on establishing the best practices for testing and certification of mounting structure products before they are deployed. The quality of raw materials used for these structures is also key for durability. The appropriate choice and design of a mounting structure system are imperative for the optimal performance of a solar energy project, especially in the Indian market.

“Unless the industry reacts quickly and self-corrects, we are going to see unnecessary regulations put in place, further burdening the industry. Insurance costs will also go up if mounting structures start to fail,” said Prabhu.