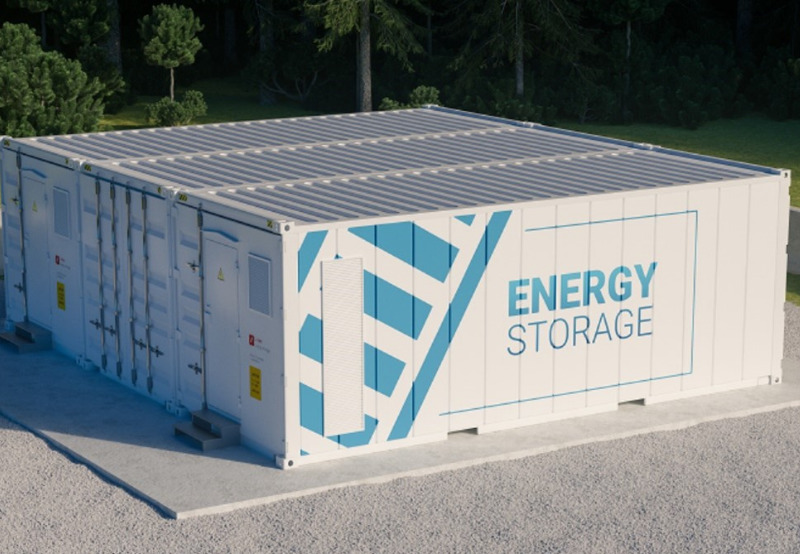 NITI Aayog, in collaboration with the Rocky Mountain Institute (RMI), recently published a report, which estimates India’s future demand for batteries under an ‘accelerated scenario’ and a ‘conservative scenario,’ to help support the increasing number of electric vehicles, significant grid storage requirement and contribute to the country’s energy security.

Currently, India has a negligible presence in the manufacturing of advanced cell technologies. However, the country has a vast potential for large-scale battery manufacturing, and the report states that India’s annual battery market could surpass $15 billion (~₹1.12 trillion) by 2030, and the battery demand in India is expected to rise to 260 GWh in the ‘accelerated scenario’ by 2030.

PLI program – a boost for the battery manufacturing segment

The production-linked incentive (PLI) program announced by the government is one such initiative that would provide the much-needed incentive to boost the manufacturing capacity of batteries in the coming years.

With the global storage market expected to exceed $150 billion (~₹11.17 trillion) annually by 2030, there is a clear motivation for India’s market participation. According to the report, India is well-positioned to capture a large share of the growing global storage market and could represent up to 13% of global battery demand by 2030.

Value of batteries in EVs

According to RMI’s research and Bloomberg New Energy Finance’s analysis, the global demand for lithium-ion batteries is expected to touch 2.8 TWh annually by 2030. Most of that demand will cater to electric mobility. 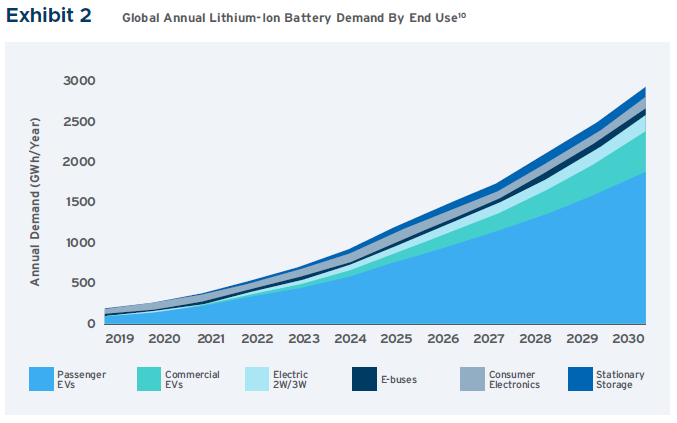 Batteries account for nearly 25-50% cost of EVs, and the battery is the most critical component of an EV. As costs come down and specific energy densities continue to increase, the performance and cost competitiveness of EVs will continue to improve and will soon become the more attractive choice for customers.

Stationary ESS can provide up to 17 different services to stakeholders at all levels of the electricity system, including utilities, grid operators, and end-use customers. The ESS applications market is also expected to touch $30 billion (~₹2.23 trillion) globally by 2030.

Opportunity for ACC batteries in India

The report notes that the majority share of global battery sales has shifted from consumer electronics to EVs in the last five years, with 54% of the global advanced battery sales catering to the demands of the EV segment between 2015-2019.

The report notes that several national and state-level initiatives such as FAME II and state EV policies will create an ecosystem for accelerated EV deployment, hoping to catalyze the market. The success of remodeled FAME II has led to the growing penetration of EVs, with the annual demand for EV batteries in India expected to exceed 135 GWh/year by 2030.

According to the ‘accelerated scenario,’ the segment-wise penetration of EVs in new vehicle sales in this scenario will be 30% for private cars, 70% for commercial cars, 40% for buses, and 80% for two- and three-wheelers by 2030. A weighted average EV penetration of 35% in new sales in 2030 across all vehicle segments is predicted in a ‘conservative scenario.’ 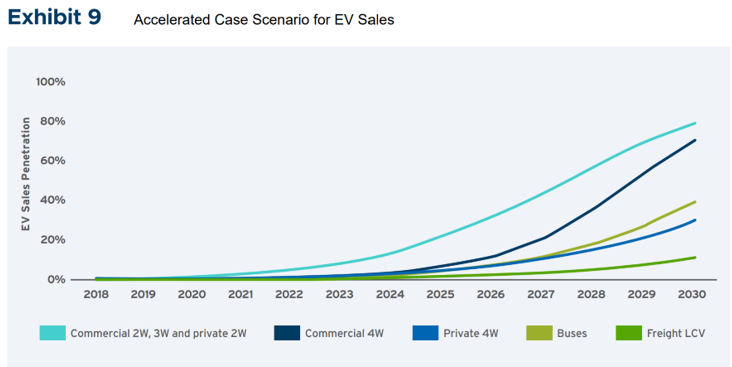 While the total ESS projects commissioned or under construction is only around 85 MWh so far, there is already a pipeline of projects amounting to 4.6 GWh in India, suggesting strong momentum in this sector.

The report projects that the cumulative capacity of stationary storage for grid support can reach 26 GW/104 GWh in the ‘conservative scenario’ and could expand up to nearly 65 GW/260 GWh by 2030 in the ‘accelerated scenario.’

The report states that India’s annual market for stationary and mobile batteries could surpass $15 billion (~₹1.12 trillion) by 2030, with almost $12 billion (~₹893.63 billion) from cells and $3 billion (~₹223.41 billion) from pack assembly and integration, under the ‘accelerated scenario.’ Under a more ‘conservative scenario,’ it would amount to an annual market of $6 billion (~₹446.82 billion). 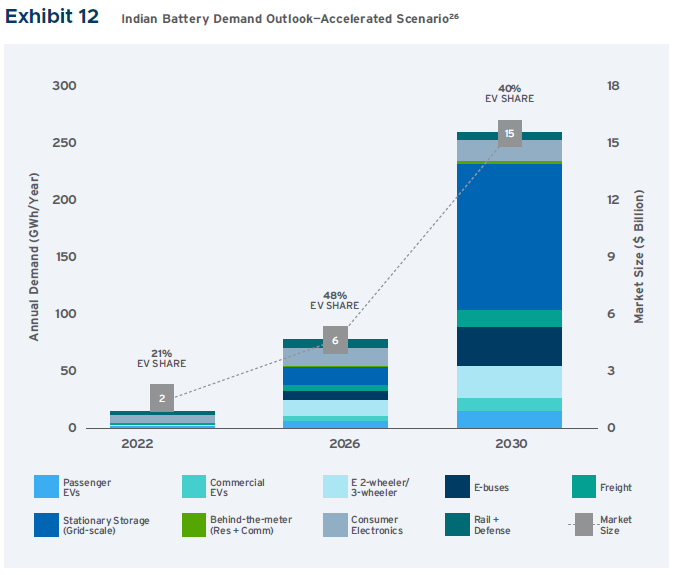 Also, the report states that under the ‘accelerated scenario,’ India can meet domestic battery demand with two gigafactories of the nameplate capacity of 10 GWh of annual production in 2022.

The report stresses the need to develop local manufacturing that leverages India’s factor costs and scale advantages while also providing an export opportunity for a rapidly growing technology sector. But such a plan must be complemented by long-term policies that further stimulate demand for batteries in mobile and stationary applications.

Last August, NITI Aayog, in collaboration with RMI, released a report reviewing the reform efforts in the Indian power distribution sector. The report analyzes the learnings and best practices from domestic and global experience to provide state governments considering further reforms to put their power distribution sector on the track to efficiency and profitability.

Earlier, in one of its reports, NITI Aayog, in collaboration with RMI, had mentioned that India’s transition to EVs would require a cumulative capital investment of $266 billion (~₹19.7 trillion) in EVs, charging infrastructure, and batteries over the next decade.