A few DISCOMs noted that an added category of ₹0.66/kWh in green tariffs for consumers opting for 100% clean energy might be difficult 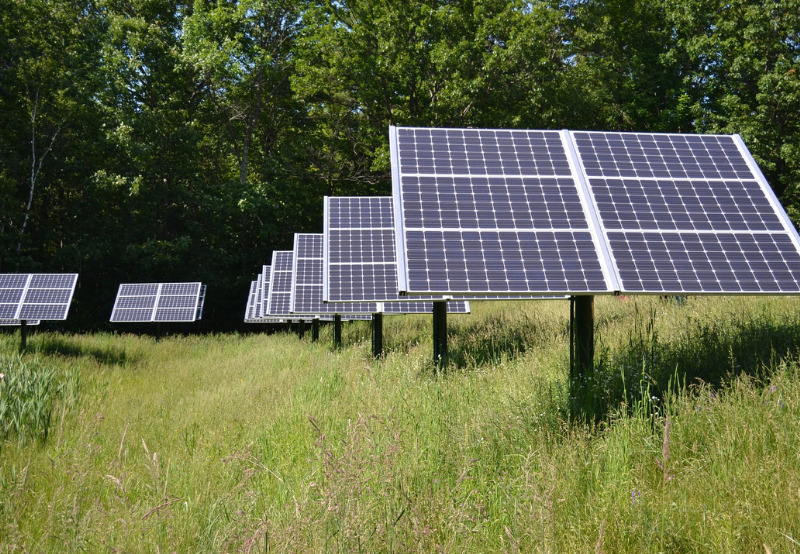 Commercial and Industrial (C&I) consumers have multiple options of going green – setting up large-scale solar projects through open access models, rooftop solar systems, or purchasing renewable energy certificates. For the individual or residential and small-scale power consumers, the only option to access renewables is through rooftop solar systems. But many do not have the ability or the access to these systems but are still willing to contribute to green initiatives.

For such consumers, recently an option of paying a green power tariff of ₹0.66 (~$0.009)/kWh over and above the normal tariff has been approved by the Maharashtra Electricity Regulator. The option is available to all consumers, including extra high voltage, high voltage, and low voltage categories. Distribution licensees will issue a monthly certificate to such consumers, stating that all power requirements of such consumer have been sourced through renewable energy sources.

Mercom India conducted a Renewable Energy Awareness Survey in 2014 in which 1,700 residential and commercial power consumers from Karnataka, Maharashtra, and Gujarat were polled over several months. The goal of the survey was to encourage renewable energy development among DISCOMs and encourage green tariff programs based on our findings.

Even in 2014, there was a clear support for green power and the willingness to pay more to access cleaner power. 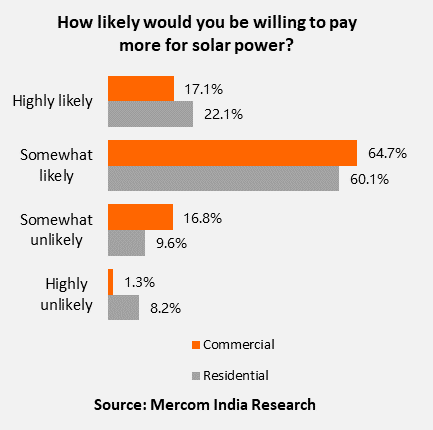 On its website, its green power tariff program is described as, “When you subscribe to GreenChoice, you are choosing to support renewable energy by ensuring Austin Energy purchases the Texas wind to match 100% of your usage. Subscribers to GreenChoice pay less than one cent ($0.0075) more per kilowatt hour (kWh) for energy than non-subscribers.”

“GreenChoice is available to residents and business owners without a contract as a subscription service that they may cancel at any time. Business owners may opt for an Energizer-level 12-month contract at the same less than one cent ($0.0075) per kWh premium and qualify for the Environmental Protection Agency’s (EPA’s) Green Power Partner Program and the City of Austin’s Green Business Leaders Program.”

With the ability to procure green power through open access, rooftop solar, power exchanges, and purchasing renewable energy certificates already available with consumers, is there a need for the option of green power tariff in India?

Some of the DISCOMs that Mercom spoke to agreed that introducing a green power tariff is a good idea but added that it might take time to gain popularity, considering several other avenues of accessing green power are already available.

Sharing his thoughts with Mercom, J.J. Gandhi, Chief Engineer (Technical), Paschim Gujarat Vij Company, a public distribution company (DISCOM) in Gujarat, said, “Consumers have multiple opportunities to procure green power. They can have captive open access power, opt for net metering, wheel power, have the power generating unit at one place and the consumption plant at another place, and consume power through the DISCOM’s network. They even have the provision to buy power through a third party and meet their renewable purchase obligation (RPO) where DISCOMs supply power.”

“To have a separate category for those who desire to consume green power is difficult. Consumers can buy power from solar, wind, and other renewable sources or even have a rooftop system,” he stressed.

But a spokesperson from Adani Electricity Mumbai, a private DISCOM, noted, “With more individuals and organizations embracing sustainability, the green tariff will enable them to participate in making a change and switching to cleaner options.”

While approving the green power tariff, the regulator clarified that it would be completely voluntary, providing an option to all consumers to contribute to increasing the country’s share of renewable energy sources. This is also an opportunity for those consumers who are not eligible under the regulatory framework nor have the resources and expertise required for carrying out open access transactions or purchasing renewable energy certificates.

“In India, a green tariff would allow consumers to choose their source of electricity and make renewable energy accessible to entities committed to reducing their carbon footprint,” added the AEML spokesperson.

While opting for a green power tariff is a very simple way for consumers to contribute to the environment wary of other choices demanding regulatory processes, DISCOMs are concerned about the accounting procedures.

Gandhi pointed out that carving out a separate billing component could lead to added complexities for DISCOMs.

“We already have our RPOs. The DISCOM is buying renewables as well. So, the supplied power is a mix of conventional and renewable sources. To exclusively create a category of green tariff for consumers could be difficult for the DISCOMs as managing the intermittent power supply would be an issue,” said Gandhi.

“While the green tariff is welcome, it might be difficult to match the exact consumption point at a particular time, and this could lead to complications. At the same time, the grid would be supplying conventional energy. The differential cost would have to be passed to other consumers too.”

To simplify the billing process and make it uniform across DISCOMs, the regulator has computed the green tariff as the difference between pooled power purchase cost of non-conventional and conventional energy sources (only variable cost). Since this is a new initiative, the regulator will be observing the response and the accounting issues and addressing them while reviewing after a year. The objective is to start the green tariff drive.

In Delhi, instead of paying a green tariff, consumers can go green by availing avenues like group net metering and virtual net metering, which is unique to Delhi.

With virtual net metering, consumers own a part of a collectively-owned solar power generating system. All energy produced by such a solar system will be fed into the grid through an energy meter, and the exported energy, as recorded by that meter, will be credited to the electricity bill of each participating consumer based on beneficial ownership.

Again, while this option is available to citizens of Delhi, consumers in other parts of the country don’t have this facility.

When asked where else this mechanism would work well, the official pointed at Karnataka, where they have already met their RPO and have surplus renewable power. “They can earn renewable energy certificates or supply this green attribute to their consumers at the payment of certain premium,” he added.

Commenting on the green tariff move, an executive from another DISCOM noted that regardless of the complications and hurdles, the component will now give DISCOMs an option to choose and decide whether they wish to offer a green tariff or not.

Talking about the consumer blend that could go in for green tariff, he said, “All DISCOMs have a corporate, commercial, industrial, residential mix of clients. Energy-intensive clients, who feel that they have an option, will go for a green tariff. Out of 100 units, if someone wants to go for green power for 10 units, he can go for it in the denomination of 10, 20, 30, and so on.”

“Consumers have reacted positively, with the numbers switching to green crossing a century on day one of introducing the option. Since the launch of the initiative on June 5, World Environment Day, Adani Electricity Mumbai has already seen more than 500 consumers make the shift to the green tariff,” added the AEML spokesperson.

Interestingly for Adani, not only multinationals and large commercial establishments are making the switch, but individuals and small-scale enterprises conscious of carbon impact are also showing their interest in adopting the green component.

The concept of green tariff is at a nascent stage in the country. The industry will have to wait for six months to a year to watch how DISCOMs sell the green component to consumers to help them shift to 100% green power.

The push to cut carbon emission is likely to motivate consumers to go in for green tariff in the long run, with consumers conscious of their carbon footprint also preferring to engage with commercial establishments such as hotels, restaurants, malls, and other such entities committed to turning green with their power consumption.

“As for DISCOMs, the green tariff slab is expected to take them much beyond their renewable purchase obligation targets as more consumers opt for it,” added the spokesperson from Adani.

Despite the procedural issues pointed out by the DISCOMs, the green power tariff is a unique plan to include those consumers to go green who would have been otherwise left out in the game of big players and lengthy regulatory processes.

“The green power tariff program can be a great tool to give consumers who do not have the means to install renewable energy a choice by allowing them to voluntarily pay and procure clean power from solar, wind, and other sources. These programs can increase demand for renewable power, generate additional revenues, and improve the environmental performance and reputation of DISCOMs. The key to success for such programs is simplicity and awareness,” said Raj Prabhu, CEO of Mercom Capital Group.