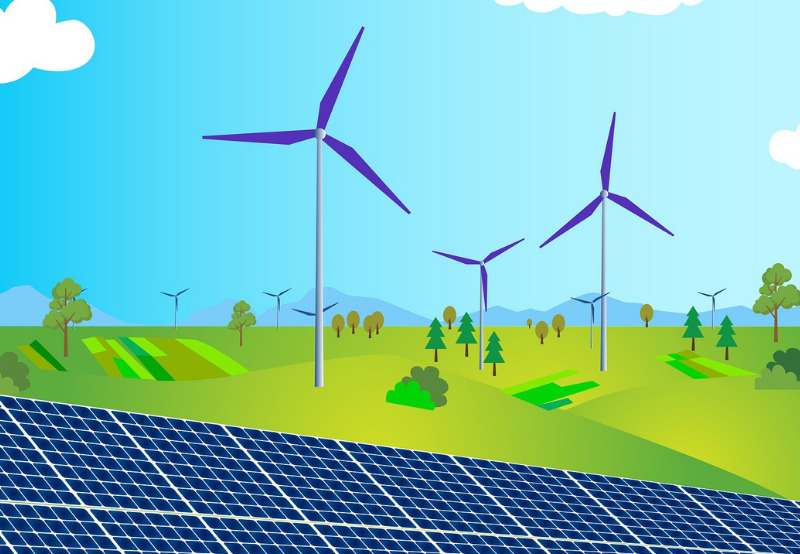 Despite rising costs for critical materials used to make solar panels and wind turbines, almost 290 GW of new renewable power projects will be commissioned in 2021, a 3% year-over-year growth compared to 2020, according to the International Energy Agency (IEA) ’s Renewables 2021 report, which analyzes the renewable energy sector based on current policies and market developments.

Solar PV alone accounts for more than half of all renewable energy additions in 2021, followed by wind and hydropower.

The IEA report said China will remain the global leader in capacity additions, with 1,200 GW of total wind and solar capacity to be installed by 2026. This achievement is four years earlier than its current target of 2030.

India is set to come up top in terms of growth, doubling new installations compared with 2015-2020. The country could add 121 GW of renewable capacity over 2021-2026, an 86% increase in existing capacity, making it the third-largest growth market globally after China and the United States.

According to IEA Executive Director Fatih Birol, the growth of renewables in India, riding on the heels of the government’s newly announced goal of reaching 500 GW of renewable power capacity by 2030, highlights India’s broader potential to accelerate its clean energy transition. 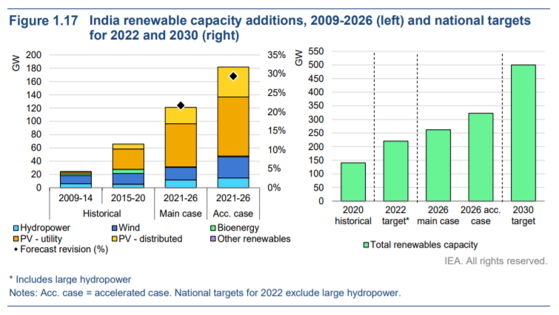 “This year’s record renewable electricity additions of 290 GW are yet another sign that a new global energy economy is emerging,” said Birol. “The high commodity and energy prices we are seeing today pose new challenges for the renewable industry, but elevated fossil fuel prices also make renewables even more competitive.”

Solar PV remains the powerhouse of growth in renewable electricity, with its capacity additions forecast to increase by 17% in 2021 to a new record of almost 160 GW. In the same time frame, onshore wind additions are set to be almost one-quarter higher on average than during the 2015-20 period. Total offshore wind capacity is forecast to more than triple by 2026.

The report forecasts that by 2026, global renewable electricity capacity will rise more than 60% from 2020 to over 4,800 GW. Renewables are set to account for almost 95% of the increase in global power capacity through 2026, with solar PV alone providing more than half. The amount of renewable capacity added throughout 2021 to 2026 is expected to be 50% higher than from 2015 to 2020.

The report suggests that governments can accelerate the growth of renewables by addressing key barriers, such as permitting and grid integration challenges, social acceptance issues, inconsistent policy approaches, and insufficient remuneration. It finds that high financing costs in developing countries are a significant obstacle to renewables installations in these parts.

The U.S. Energy Information Administration’s International Energy Outlook 2021 report finds that renewables will be the primary source for new electricity generation in 2050. However, natural gas, coal, and batteries will meet load and support grid reliability.