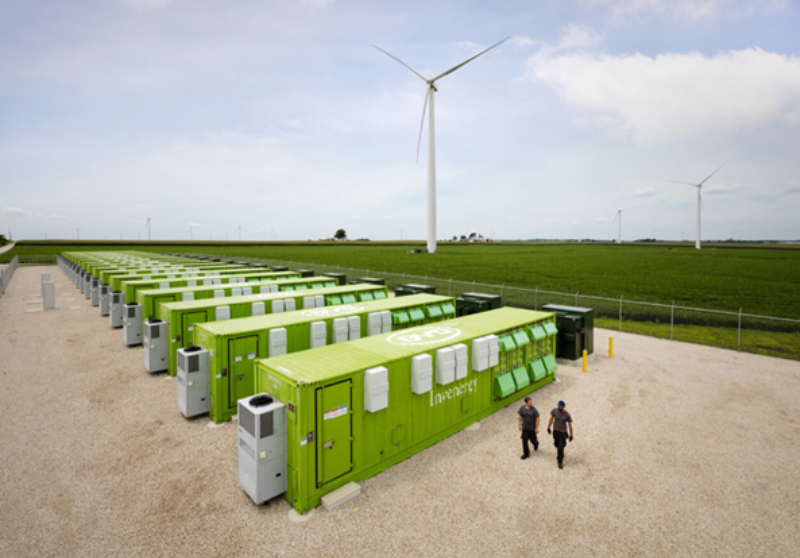 Energy storage installations worldwide are projected to reach a cumulative of 411 GW by the end of the decade, according to BloombergNEF (BNEF). In its 2H 2022 Energy Storage Market Outlook, BNEF saw an additional 13% of capacity by 2030 to its previous estimates.

The additional capacity accounts for roughly 46 GW and is primarily driven by recent policy developments. The most notable of these new policies include the U.S. Inflation Reduction Act (IRA), which provides more than $369 billion in funding for clean technologies, and the European Union’s REPowerEU plan to make Europe independent from Russian fossil fuels before 2030.

With its large volumes of funds allocated for wind, solar, and storage tax credits, IRA has made way for the U.S’s acceleration in clean energy. The law will drive roughly 30 GW of energy storage build from 2022 to 2030, according to BNEF.

The ambitions of renewable targets outlined in the REPowerEU plan and a renewed focus on energy security in the UK align with the significant utility-scale storage additions expected from 2025 onwards. From the previous forecast, BNEF has more than double energy storage deployments from 2025 to 2030 across Europe.

The report said an estimated 387 GW of new energy storage capacity will be added between 2022-2030 worldwide, equating to more than Japan’s entire power generation capacity from 2020.

By the decade’s end, the United States and China will remain the two largest markets, representing over half of the global storage installations. However, Europe is catching up with a significant ramp-up in capacity catalyzed by the continent’s current energy crisis.

Helen Kou, an energy storage associate at BNEF and lead author of the report, said, “The energy storage industry is facing growing pains. Yet, despite higher battery system prices, demand is clear. There will be over one terawatt-hour of energy capacity by 2030. The largest power markets in the world, like China, the U.S., India, and the EU, have all passed legislation that incentivizes energy storage deployments.”

Regionally, Asia Pacific will lead storage build on a megawatt-basis by 2030, with momentum driven by the rapidly scaling market in China. But the Americas will add more capacity on a megawatt-hour basis as storage plants in the U.S. usually have more hours of storage. Even with its additional upside from recent policy advances along with the Middle East and Africa, Europe is set to lag behind its counterparts. 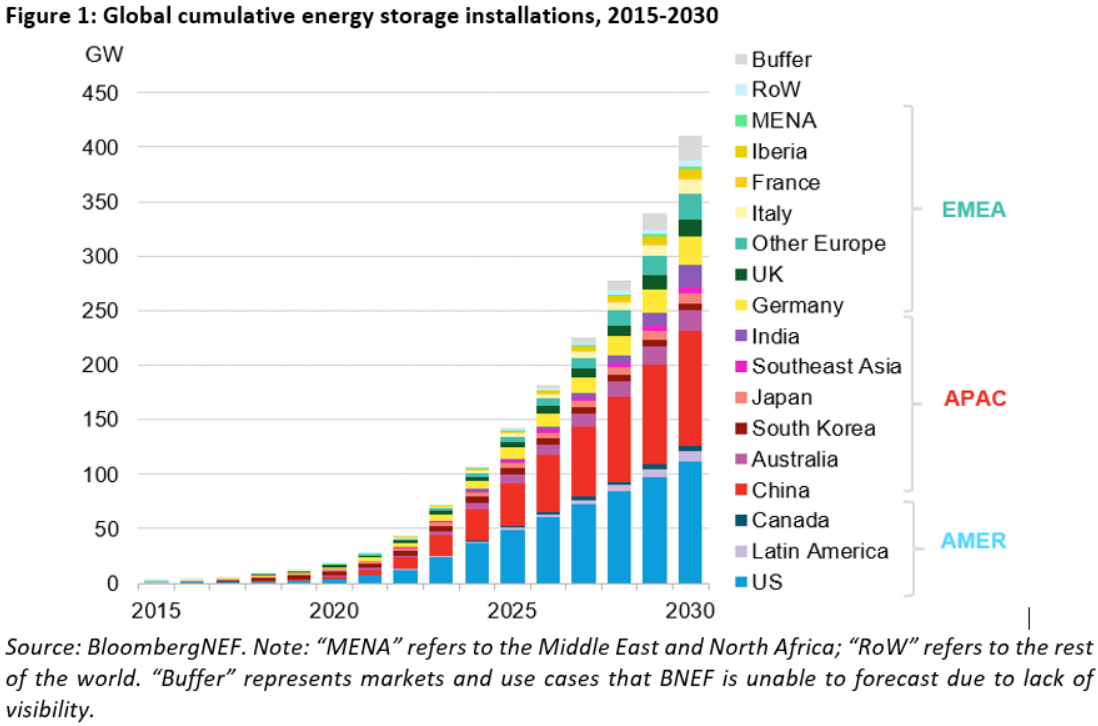 The evolving battery tech is driving the energy storage market. Currently, lithium-ion batteries account for the majority of installations. However, many non-battery technologies, such as compressed air and thermal energy storage, are under development.

BNEF expects batteries to dominate the market until the 2030s, owing to their price competitiveness, established supply chain, and significant track record. If new technologies can outcompete lithium-ion successfully, total energy storage uptake can be larger.

The forecast suggests that the majority of energy storage built by 2030 will be used to provide “energy shifting,” i.e., advancing or delaying the time of electricity dispatch. Customer-sited batteries, both residential and commercial, are also expected to grow at a steady pace. Germany and Australia are currently the leaders in this space, with sizeable markets in Japan and California.

BNEF forecasts that energy storage in homes and businesses will make up about one-quarter of global storage installations by 2030.

Yayoi Sekine, head of energy storage at BNEF, added: “With ambition, the energy storage market has the potential to pick up incredibly quickly. The nuts and bolts of how energy storage projects will materialize due to big policies like the US Inflation Reduction Act still need to be sorted. However, companies are already scaling up operations to capture the upside.”

The U.S. energy storage market added 955 MW and 2,875 MWh of new installations in the first quarter of 2022, taking the total grid-scale installations capacity to 2.3 GWh, according to a report released jointly by Wood Mackenzie and the American Clean Power Association.