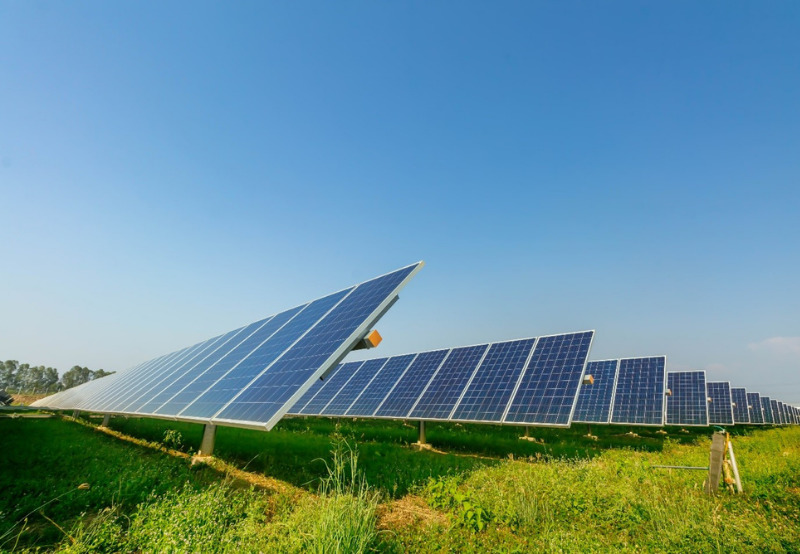 Global corporate funding in the solar sector, including venture capital (VC) funding, private equity, public market, and debt financing, stood at a record ten-year high of $27.8 billion in 2021, a 91% growth compared to $14.5 billion raised in the last year, according to Mercom’s recently released 2021 Solar Funding and M&A Report. 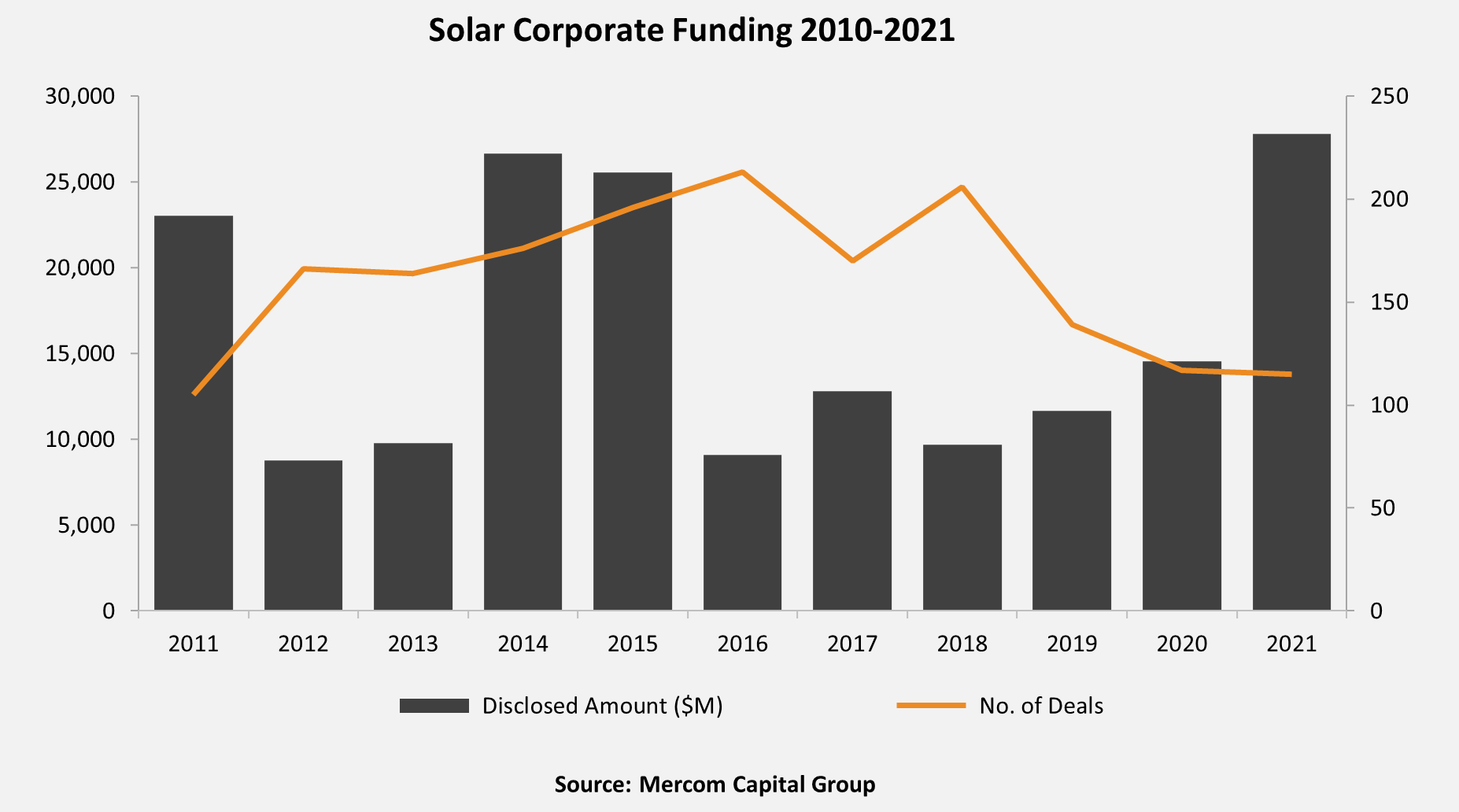 “2021 was the best year for solar corporate funding as well as mergers and acquisitions (M&A) since 2010. Financing activity bounced back strongly following a COVID-19 affected 2020. There was more money than ever chasing deals and more demand than supply of attractive companies and assets as organizations and funds look to fulfill their ESG and clean energy mandates,” said Raj Prabhu, Chief Executive Officer of Mercom Capital Group. 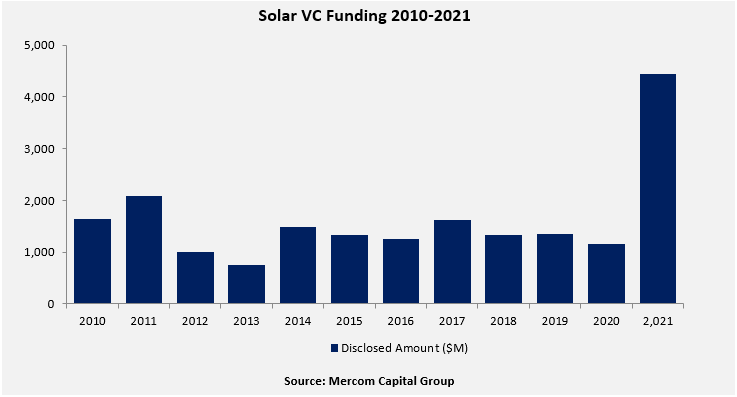 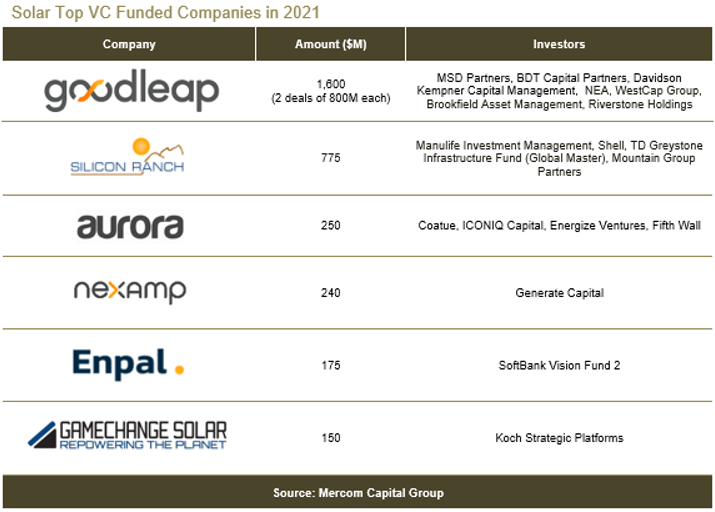 The frontrunners in the VC funded companies list in 2021 were GoodLeap (formerly Loanpal) which raised $1.6 billion in two separate transactions of $800 billion each; Silicon Ranch Corporation, which brought in $775 million; Aurora Solar, with $250 million raised; Nexamp with $240 million; Enpal at $175 million; and GameChange with a $150 million worth of funds raised.

In 2021, 154 VC and private equity investors participated in funding deals, with seven involved in multiple rounds.

According to the report, 2021 solar public market financing increased 49% to $7.5 billion in 2021 from $5.1 billion in 2020. In the most prominent public financing deal of 2021, Shoals Technologies Group, a balance of systems (BOS) components for solar projects, raised $2.2 billion through its initial public offering (IPO). A total of ten solar companies went public through IPOs and special public acquisition companies (SPACs) in 2021.

“Record securitization activity was a key contributor to the rise in debt financing activity during 2021, with $3.7 billion in 13 deals,” the report noted. 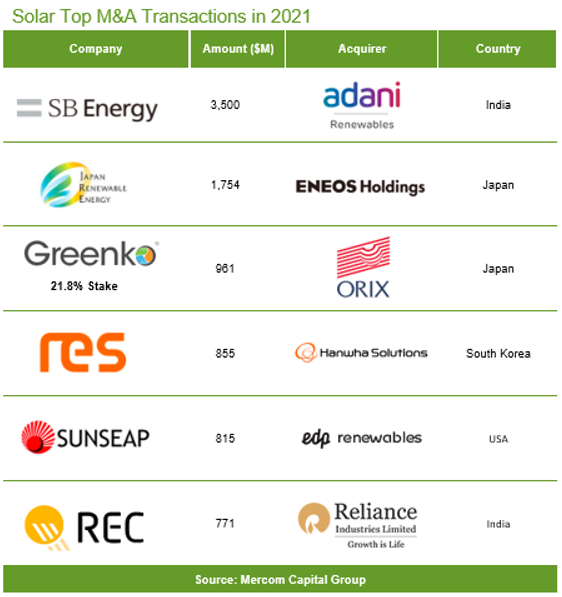 The report revealed that there were a record 126 M&A deals in 2021. Most of the transactions involved solar downstream companies. The largest transaction in 2021 was Adani Green Energy Limited’s acquisition of SB Energy India at an enterprise value of around $3.5 billion. 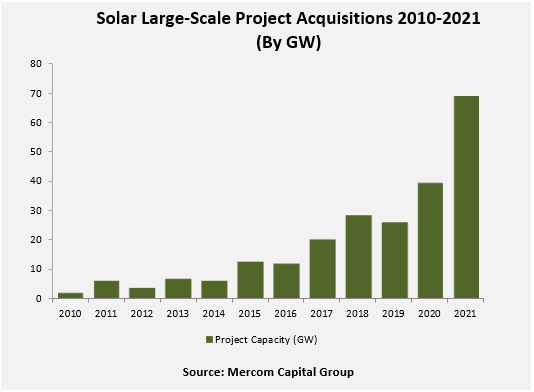