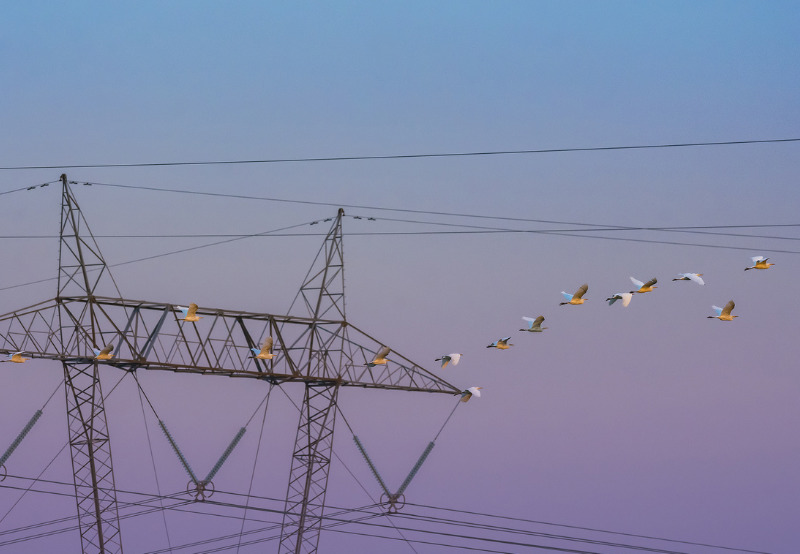 Uncertainty looms over the future of renewable power projects in Rajasthan following the Supreme Court order which says that power lines in the region be shifted underground, as electrocution was one of the reasons cited for the death of the Great Indian Bustard (GIB), an endangered species of a large bird.

According to the main petitioner, in this case, Wildlife Institute of India, the Great Indian Bustard has disappeared from 90% of the habitat except for parts of Rajasthan and Gujarat which have to be protected. Every year over 100,000 birds die due to collision with the power lines, and unless this is checked, the extinction of the GIB is certain. So, shifting the power lines underground and placing bird diverters until then are actions suggested. But the surge in cost for laying the powerlines underground is exorbitant and mired by various other issues, including the right of way (the permission for an individual to enter private property and use it as a passage).

Talking to Mercom, an executive at a leading renewable power generator said that the cost of developing the projects would go up by a whopping 87%. “Earlier, if the cost of laying a 20 km line was ₹1.6 billion (~$21.45 million), it would now shoot up to ₹3 billion (~$40.2 million). We have to bring down the overhead power lines underground. And that has a huge impact on us,” he added.

Developers estimate the total cost to move the existing overhead line to underground cables at ₹220 billion (~$2.95 billion), requiring a 10-15% tariff hike if they have to bear this entire cost.

“If the distribution companies (DISCOMs) agree to be a part of these projects, then they will be forced to increase the tariff as well. According to a back-of-the-envelope calculation, tariff for the consumer will rise by a minimum of ₹0.80 (~$0.011). It has to be seen whether the consumers agree to such a steep tariff hike or not,” said one of the developers.

The supreme court order also mentions that “if cost is incurred, it would also be permissible to pass on a portion of such expenses to the ultimate consumer subject to the approval of the competent regulatory authority.”

Another executive with a large developer said, “It is not just the added cost; the right of way is a greater issue. Private landowners will not let you dig the land and lay powerlines. Earlier it was just the footprint of the tower, but now we need to wait for their approval to dig through the lands and which will further delay project commissioning.”

One of the major issues that power producers fear they will face is the hurdle to acquire land for laying underground lines. “We do not know how the villagers will react if we go for acquisition of land for laying underground lines. Earlier, we have seen that projects have faced problems with the land acquisition as the villagers were not convinced. Also, the compensation packages come into play, and the cost of the projects go haywire,” said a developer.

Industry executives pointed out that these projects cover a long timescale, many set up years ago to the ongoing ones. Such an exercise would incur huge financial resources, to be borne predominantly by the project developers.

There are also suggestions made to mobilize financial resources for this enormous exercise. One of the options is to tap on funds for corporate social responsibility and the compensatory afforestation fund available with the central and state authorities. Rajasthan has already set up a Compensatory Afforestation Fund Management and Planning Authority in 2009, which allows the fund to improve wildlife habitat, as mentioned in the court order.

Transmission company respondents to the order have said that it is not technically feasible to lay underground high-voltage lines. A couple of reasons for this is – high cost, high downtime to repair faulty cables, non­availability of cables at 765 kV level, and increase in the number of joints with the length of the run. There are instances where 220 kV lines are laid underground for the safety of Greater Flamingos in the Khadir region of Kutch. But this depends on the terrain, area, distance and has to be estimated on a case-to-case basis.

The region has many power installations, including renewable energy sources like wind turbines and solar projects. More are expected to come up in the coming years.

It is noted in the supreme court order that it would not be feasible to lay underground power cables in certain areas, and already existing cables also cannot be moved in certain locations. In such locations, it is recommended for bird diverters to be installed on the existing power lines; wherever technically feasible, the new power lines in the vicinity of the habitats of the birds can be taken underground.

A committee appointed by the Supreme Court will decide on the feasibility. The supreme court has ordered that the conversion to underground power lines be completed within one year from the date of the order, and until such time the diverters should be hung from the existing power lines.

“We do know that there is a need for preserving natural flora and fauna, but there is another aspect to it as well. And that pertains to the retrospective application of this judgment since several existing projects were established a long time ago through competitive bidding. The issue that needs to be addressed is whether these ecological considerations were part of the bidding conditions,” said an industry executive.

“The rise of cost in project development due to this issue will come under the ‘change in law’ clause, but that is a long process. Developers are still struggling to get goods and services tax (GST) and safeguard duty reimbursement for over two years. Generally, the developers have to invest in 220 kV lines of 20-25 km from the project site to the substation. Earlier, this would cost ₹10 million ($140,000)/km when it was overhead powerlines. Now, if we have to build powerlines underground, it will cost us ₹40 million ($540,000)/km,” another developer commented.

Providing a legal perspective, Aditya K. Singh, Associate Partner, Link Legal Services, said,” It is relevant to note that observation of the bench in Great Indian Bustard matter appears to be in contradiction of views taken by the Supreme Court in Nabha Power, Shivshakti Sugar Mills wherein the Supreme Court has specifically observed that the economic impact of the judgment should be taken care. In the instant matter, Supreme Court, without dwelling upon relevant clauses, directed affected parties to take shelter of the contract. These contractual benefits may not be available in all cases. I am hopeful that Supreme Court will take a liberal view as it has taken in telecom adjusted gross revenue dues payment.”

The supreme court has also ordered the overhead powerlines in the priority and potential habitats of the bird to have bird diverters or converted to underground power lines based on feasibility. Rajasthan has 4000 square km priority habitat and 19,728 square km of potential habitat identified for Great Indian Bustard in Thar spanning over Jaisalmer, Jodhpur, and small parts of Bikaner and Barmer districts. This area also has a very high potential for solar and wind energy generation, and many developers have already acquired land for projects in these areas. Of the 37 GW planned substations in Rajasthan, 30 GW are likely to come under the habitat area.

A majority of the evacuation infrastructure is interstate transmission system (ISTS) related and located in Rajasthan scheduled for 2022-23, and there could be serious implications on the solar projects developed in Rajasthan due to this court order.

Developers hope the supreme court will review the order to consider only the priority area for underground power lines for now. The potential habitat area is far larger, and it could be disastrous if this is also mandated with underground powerlines.

Lenders Mercom spoke to are hopeful that only a few projects could be coming under the priority area of the habitat. The supreme court order has said that if it is not financially viable to take the powerlines underground, they can install bird diverters which should not cost much. Also, the developers have the option of claiming reimbursement under the ‘change in law’ clause. But then there are also mulling on how to factor this risk in the future projects that come up for financing.

Developers have now let the Ministry of New and Renewable Energy (MNRE) take the case forward with the Apex Court and hope for the court to review its order.

“More clarity is needed, and we are hoping that the government will take some positive steps to sort out the issue,” said one developer.

Commenting if the order is final or would be reviewed, Aditya K. Singh, Associate Partner, Link Legal Services, said, “In recent past, we have seen that Supreme Court has entertained review petitions filed by the government like in Sabarimala case, Subhash Kashinath Mahajan case, Rajesh Sharma case, among others. In this matter as well, if the government can give a solution for both problems – Life of GIB, and growth of renewable energy assets, Supreme Court may consider it a fit case to modify its orders.”

In any competitive bidding, more so for the renewable energy projects in the country, there is tremendous pressure on the producers to keep the tariffs at the lowest possible levels. The question being asked by the developers is that if these environmental norms were not part of the original bid conditions, then is it fair to put the extra financial burden on the developers at a later stage.

“There is a strong case to be made that the affected solar and wind projects are clean, environmentally friendly energy sources that are helping with severe air pollution issues in India. Every effort should be made to find practical solutions for this problem without financially burdening the very projects that are doing so much good for the environment,” said Raj Prabhu, CEO of Mercom Capital Group.