Sunseap Group, a Singapore-based solar energy company, announced that it signed a virtual power purchase agreement with Facebook to supply around 100 MW of solar energy from over 1,200 rooftop installations across Singapore. The generated renewable energy will be utilized to support Facebook’s operations in Singapore, including its first custom-built data center in Asia.

In this case, Facebook will receive renewable energy credits from the electricity generated by rooftop systems installed on 1,200 public housing residential blocks and 49 government buildings across Singapore. The company stated that the project is expected to be completed in 2022.

“We believe VPPA is the way to go for enterprises as they accelerate efforts to add renewables to their energy mix. This is a game-changer in Asia’s drive to decarbonize and fight climate change. Furthermore, companies that are constrained by a lack of space to install solar panels or those that require geographic flexibility will find a virtual contract suitable for their needs,” said  Lawrence Wu, President and Executive Director of Sunseap Group.

The new agreement will help Facebook achieve its objective to support its operations in the region with 100% renewable energy while reducing greenhouse gas emissions by 75%.

Facebook has so far contracted over 5.4 GW of renewable energy to support its global operations, according to its press statement.

“This project will be an important part of successfully reaching our targets in the region, including supporting our data center operations with renewable energy,” said Urvi Parekh, Head of Renewable Energy at Facebook.

According to Sunseap Group, it has installed, contracted, and developed renewable energy projects with a total capacity of 1.7 GW across the Asia Pacific region. The company also has a pipeline of projects in China, Taiwan, Australia, Japan, and other parts of Southeast Asia.

Earlier this year, Sunseap Group raised 100 million in Singapore dollars (~$71.79 million) in its fourth round of fund-raising from Banpu, a publicly listed company on the Stock Exchange of Thailand. The funds were to be used to support the company’s projects and expansion across Asia. 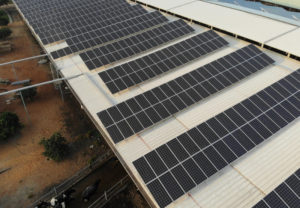