Energy Storage Will Drive the Growth of Renewables in Future 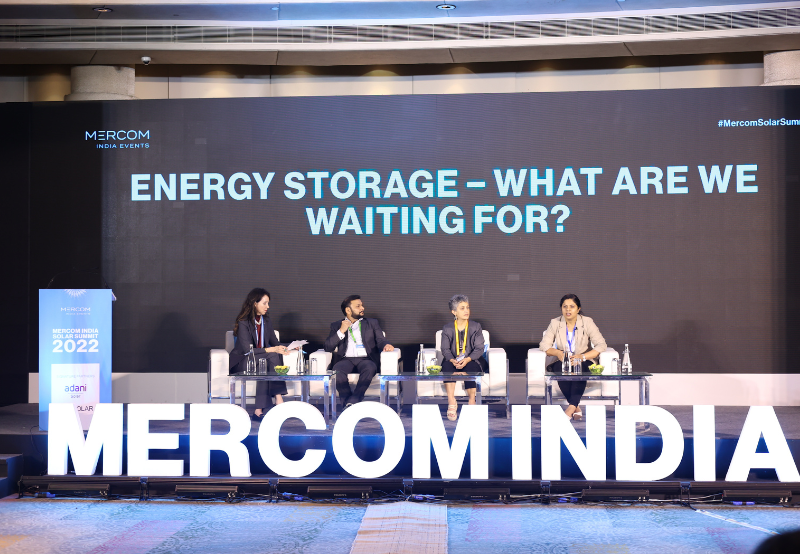 There is a growing need for energy storage systems to supply round-the-clock power, given the intermittent nature of wind and solar energy.

India’s energy storage capacity stands at 27.2 GWh. A total of 7,700 MWh of energy storage projects have been tendered, along with 1000 mWh of pumped storage hydro currently under development.

The tenders floated by the Solar Energy Corporation of India (SECI) and NTPC amount to 7,600 MWh, indicating a robust pipeline for energy storage projects.

The energy storage segment is expected to achieve more traction during the second half of the decade as battery manufacturing capacities ramp up, bringing the overall cost of production down.

The two-day Mercom India Solar Summit 2022, which began on July 28 in New Delhi, discussed issues relating to energy storage in a session titled ‘Energy Storage: What Are We Waiting For?‘ The panelists were Naveen Khandelwal, COO and CFO, BrightNight India; Upma Koul, Vice President, Sumitomo, SHI FW; and Sanskriti Dubey, Market Growth, Lead at Fluence. They shared lessons learned from global markets, the role of short and long-term energy storage, and the technologies that can address the various pain points.

Khandelwal suggested that India should pay more attention to various storage technologies, which would help India meet its energy targets.

Upma Koul said, “Lithium-ion batteries have become synonymous with energy storage. But the thing is that it is not feasible to go with only one technology. There are several technologies to choose from for the long-term and short-term. It is clear that innovation is taking place in the energy storage segment. Long-term storage should be treated as a different asset class. Some of the challenges are perceived risk and the lack of a skilled workforce. Lending institutions should support innovations and remove the perception of risk. The entire energy ecosystem should be integrated, with storage playing an important role.”

Koul added that most of the technologies have components that can be manufactured in India. Citing the example of the United Kingdom, she said that India could do well in implementing the model in India. She emphasized the importance of long-term planning.

Sanskriti Dubey said, “Energy storage has a big future in India, and it will get mainstream soon. We should create a level playing field. Having energy storage obligation targets is a good move in this direction. Storage targets will create a mandate. We must focus on the grid’s requirements and consider what is required to balance the grid. We need to follow the case of Australia and implement it in Indian conditions. We should consider the design requirements, safety parameters, and degradation for any storage project.”

Khandelwal said there was a need to continue the momentum and increase the number of hybrid tenders. “The agencies should support multiple technologies. We should look at storage in a multi-dimensional approach. There should be consistency in regulatory policies. Seasonal storage is also one technology that can help provide round-the-clock power. It will be crucial for wind generation projects, which are in operation during the monsoon. Storage can help provide energy during other months of the year.”

Stressing that India is a cost-conscious market, Khandelwal said that blending storage with other technologies instead of standalone storage projects is the way to go. He pointed out that as electricity is a concurrent subject, states should work in synergy with the center to achieve the energy targets. “We should combine storage with various renewable energy sources, which would go a long way in making storage dispatchable.”.

Koul stressed the importance of developing an ancillary market. Right now, we don’t have any mechanism for ancillary services. The ancillary market can be developed in India. Everyone is going for energy transition, and energy storage will play a big part in this.”

The Mercom India Solar Summit, on its second day on July 29, will devote sessions to discussing topics including manufacturing, technological innovations, solar for C&I, large-scale solar development, and financing of solar projects.

You can register for the event here.