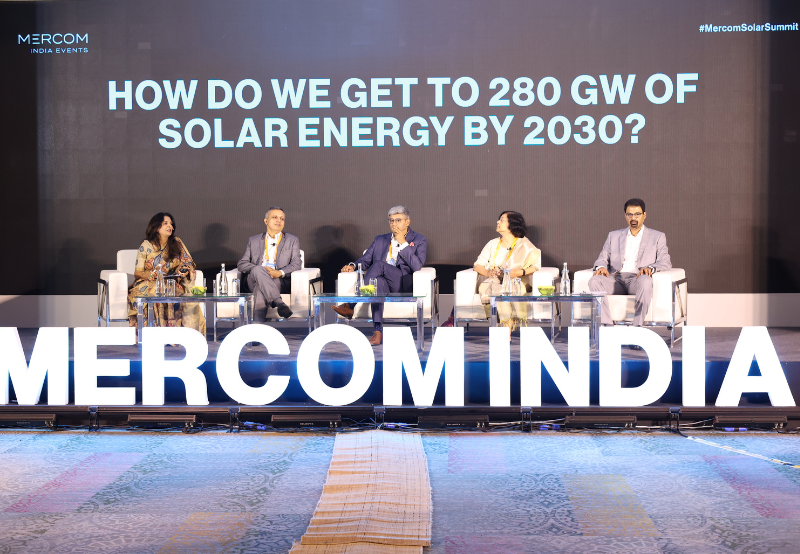 India added approximately 9.2 GW of power capacity in the first half (1H) of 2022, out of which renewables, including large hydro, contributed close to 90%.

Solar contributed about 77% to the capacity additions during the period. Even with the continued growth year on year, India must add close to 26 GW annually starting in 2022 to reach the target of 280 GW of solar by 2030.

According to Mercom India Research, India registered 20% more solar installations in the second quarter of 2022 compared to the previous quarter. The research forecasts India to add close to 15 GW of solar in the calendar year (CY) 2022.

Mercom India is hosting a Solar Summit 2022 on July 28-29 in New Delhi. A session dedicated to India’s solar target titled ‘How Do We Get to 280 GW of Solar Energy by 2030’ discussed various issues relating to the goal set, the progress achieved, and the hurdles the industry faces.

Bhargava was optimistic about the country’s path toward achieving the solar target. He said, “The short answer is yes, but there are many hurdles to cross as we get closer to the target. We have seen the renewable energy share in the power sector go up along with the demand for it. Thermal capacities have seen a decline over the years. With favorable regulations and demand, it is an achievable task.”

Sahoo felt that the slew of policies announced by the government like the storage bidding guidelines, production-linked incentive (PLI) program and transmission corridors are steps in the right direction. “The Center needs to align more with the states, and the policies need to be consistent, which otherwise could cause a lot of uncertainty.”

Shah said it was essential to consider the energy transmitted, not just installed. “There is merit in considering the vision of GWh from just GW. The incremental cost increase in solar and wind energy obliges us to talk about how much is getting transmitted and consumed and not just installed. We must consider electricity as an overall sector, not just renewable energy, to meet the goal. Electricity is the most significant sector with manufacturing and infrastructure put together.”

Prabhu spoke about how the recent global events have changed how the renewable sector operates. “The world has changed in the last few months, with the COVID-19 pandemic and the war in Ukraine. If a country like Germany can set a target for 215 GW by 2030, the target set by India is not unrealistic anymore. There is a sense of urgency worldwide, impacting policy-making and prioritizing energy security. In India, the message must come from the top down, as things start happening when it comes from the Center.”

Bhargava believed that the sector still heavily depended on the government-announced benefits to expand. “In India, the demand already exists. Even after the government announced a slew of benefits, we still depend on the government to give us more, limiting the growth rate. We need to start looking at the RE sector as an autonomous one. We must get out of the bidding trajectory by looking at markets where the demand is, such as bilateral agreements and trading exchanges as the renewable purchase obligations already drive the demand.”

Sahoo felt solar is at its best in the decentralized mode. “We have expanded to 5G data spectrums, solarizing the islands to replace diesel generators, solarizing army posts, etc. The demand is already there, and the government provides the necessary push through the RPO targets. The problem lies in the supply chain to meet this demand which is holding back people from investing.” He said that while the policies and regulations are in the right direction, they must be supplemented by the right procedures.

Shah said, “India does not have a demand issue but a supply chain one because of fundamental regulatory problems. It continues to be a licensed activity, which makes it inefficient. It is no longer the question of subsidies but whether the generator can supply the power to the consumer. It is a misrepresentation that we are an energy surplus country; we still have people who can pay for the energy but don’t have access to it. “

Prabhu stressed the importance of setting up a clear roadmap beyond the target. He said, “To reach the target for 2030, we need to install about 27 GW a year. The country also needs to start looking beyond that. Most of the sector does not know what the next step looks like, which is where the issue lies. There must be long-term visibility, broken down year on year so that they can plan accordingly. And we must get the central agencies passionate about doing the right thing to work together.”

Bhargava contended that the first step is ensuring the supply of solar modules meets the rising demand. “Most of the generators are now investing in manufacturing but can still not match the price level in India. Regarding supply, module availability at the right price will help meet the demand to install the required capacity. “

Sahoo emphasized the need to procure the components locally to meet the demand. “India is the third largest market in the world right now. The government must ensure enough competition on the local supply side, and we must be mindful that there are no monopolies in the country. The ALMM must compliment the PLI. We also have to focus on ancillaries, which form around 15% of the overall project. We must look at developing these vendors locally. We, at Tata, have invested in solar modules and cells, which we plan to start rolling out this October.”

Shah said that the duties applied by the government are causing more harm than benefit. “The developing sector will hurt with a blanket duty as we blind the domestic market, which doesn’t need to compete with the international market. A journey must be traversed, setting the domestic content requirements at 30-40% and then taking it from there. The technology needs to be developed, but with the duties, the competition is non-existent. Just the duty cannot be the answer.”

Prabhu argued that if the demand is there, the supply will follow. “We have seen many changes happen with the manufacturing expansion and the investments flowing in. We must be careful that the expansion is not abrupt. We are seeing developers wanting to get into manufacturing and second-guessing their choices down the line, which can be very risky for the sector.”

Bhargava said, “We have taken many steps towards meeting the target set by the government. We have opened ourselves to start with energy storage options as we see long-term benefits. Along with solar, we are also looking at green hydrogen as one of the important elements towards reaching this goal. These are the large buckets if I want to break down the overall 60 GW capacity.”

Speaking about their integrated setup in the sector, Sahoo added, “We are into different segments of the industry, so I can claim that we are an integrated entity. We are one of the largest rooftop solar entities working with GW capacity in rooftop installations. We have installed around 200 microgrids and invested in agrisolar and EV charging. We have a manufacturing setup for 4 GW of solar modules and 4 GW of solar cells ready to be rolled out in October. We are also working with our customers to help replace the thermal generation with renewables.”

Shah said, “We want to create a long-term shareholder trust value and regulatory framework. We aim to be a meaningful player in the bigger picture. We are into manufacturing now purely out of necessity.”

Prabhu concluded, “In theory, everything is already in place; we need enforcement and accountability to get things moving. The Indian solar sector is very enterprising. At Mercom ‘s C&I events, we have seen consumers curious about transitioning to solar. Storage is where the answer lies to cut out the reliability on DISCOMs. If the energy storage prices were to come down, we would soon see the net metering go out as businesses will see how much money they save and eventually drive the installations up.”

You can register for the Day 2 of the event here.