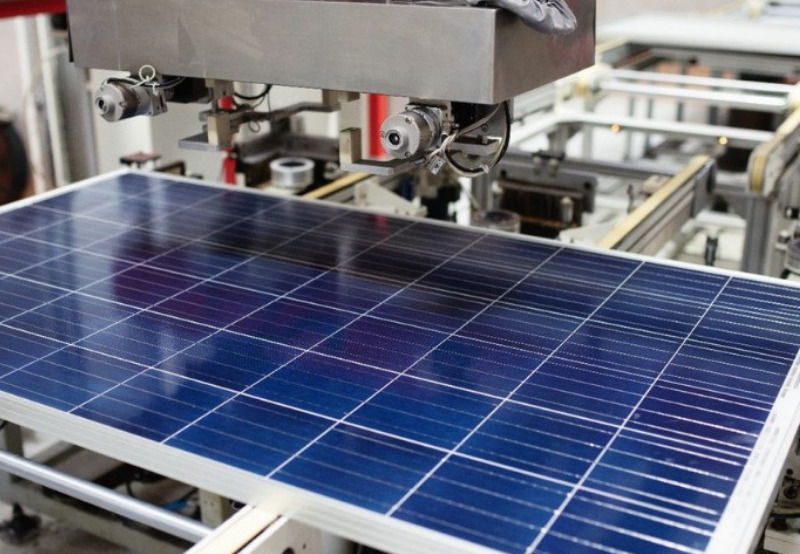 The Government of India is focusing on increasing the domestic manufacturing capacity of solar cells and modules to meet the high demand by solar developers and minimize reliance on Chinese modules. It has launched a performance-linked incentive (PLI) program to support vertically integrated, gigawatt-scale manufacturing of high-efficiency solar modules. 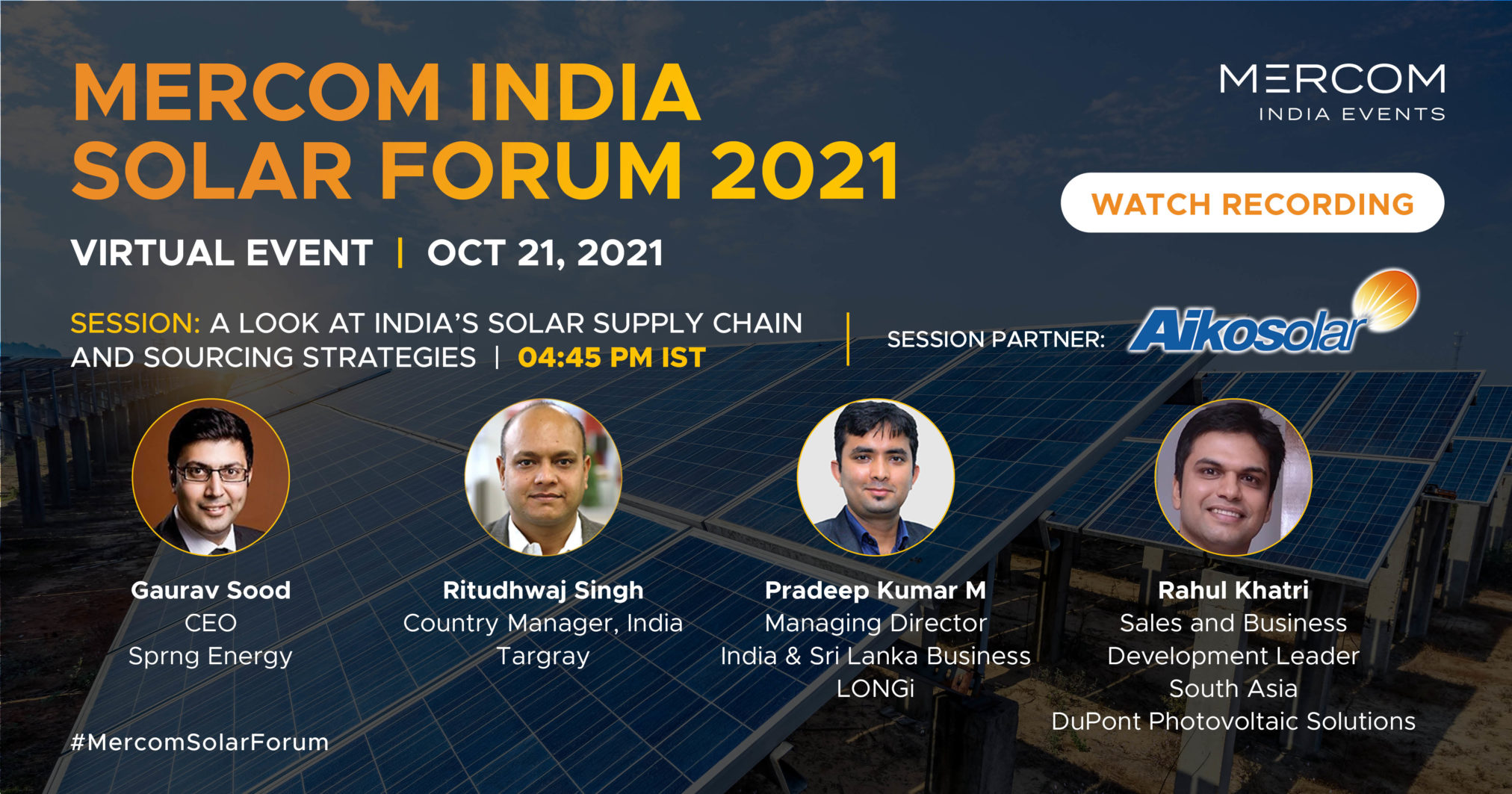 The increase in freight charges has seriously impacted the solar supply chain. Other challenges include component shortages and price rise, difficulty in importing modules due to ALMM, availability of raw materials, and shipping delays.

Ritudhwaj Singh kicked off the session by underlining that India needs to create a robust domestic ecosystem with investment into solar cells. Currently, the lion’s share of investment is flowing into module manufacturing. Singh states that India would face challenges in solar cell procurement as domestic modules manufacturing capacities continue to scale.

Sharing his views on the supply challenges faced by LONGi, Pradeep Kumar said, “even though LONGI is a vertically integrated company, we are reliant on components such as polysilicon, silver base, and back sheets, among others for our manufacturing process. Covid-19 completely shook the equilibrium state of module demand, as the countries globally faced the wrath of the pandemic. Solar glass shortage, increasing raw material cost, continue to be a challenge.”

“Despite all these hurdles, LONGi has shipped 28 GW of modules. We could do this as we had procured solar glass in advance. However, the power curtailment in China was a curveball that affected us,” Kumar added.

Kumar also noted that since India’s solar supply chain is expanding, the country needs to build the entire ecosystem domestically. According to Kumar, this would allow players in Indian solar space to mitigate issues that might arise from a rise in component price and shipping cost. However, a stable policy is vital to maintain the longevity of the domestic ecosystem. Otherwise, a single policy change could make imports from China cheaper.

Commenting on the challenges faced by developers due to the shortage in modules supply, Gaurav Sood said, “Earlier developers looked at modules as a single component with somewhat similar standards. In comparison, today, developers are looking at modules as a composition of components and are procuring them individually. We are now talking to suppliers of cells, frames, backsheets and then mix and match the components to create a competitive module.”

“Suddenly, the whole supply chain has become cumbersome, and we developers have become a manufacturer in some ways. Even though many players have claimed to set up large capacities, very few have produced substantial modules. Most have not even supplied 50 MW of modules a month. Thus, their claims to produce at gigawatt scale need to be put to the anvil. Also, there are only one or two suppliers for each component in the value chain in the country and were dependent on imports. Thus, the only way to meet the huge targets set by the country is to develop a robust domestic manufacturing ecosystem,” said Sood.

When will a breather come?

According to Singh, in April 2020, the freight charges for 40 feet containers was ~$1,300. At present, it stands at a staggering ~$10,500. Singh predicts that freight charges will not fall for at least the next six months. The only way to reduce the cost of freight, according to Singh, would be to reduce the distance between component manufacturers and module developers.

Kumar’s opinion is that the increase in the price of raw materials, components, and shipping directly results from the rise in demand for solar systems. He said that to mitigate any issue with the supply chain, the usual breathing time is at least five to six months. Kumar also believes that the shortage in solar glass manufacturing will reduce by June or July of 2022.

How can the industry be prepared?

Replying to Priya Sanjay’s question on how domestic manufacturers can be better prepared to face the challenges of supply chain disruptions, Singh said, “Supply chain disruptions have always been there and will continue to be; however, this phase has been the longest. Domestic manufacturers need to procure ample stock of raw materials or components required to serve the demand. This would also, to a certain degree, mitigate the hurdles put forth by freight as manufacturers can get all their requirements in one go and avoid multiple shipments.”

“In the long run, I believe self-sustenance is the key to cutting our dependence on a particular country for all our needs. It’s time for India to take the leap of faith and start building a domestic ecosystem. The government should be proactive and enact laws to attract investors to set up factories that produce India’s entire solar value chain. Even the new markets are enacting policies that can potentially benefit India. It’s up to us to leverage those policies.” Singh added.

Kumar shared his opinion on how domestic manufacturers can be better prepared to phase the challenges of supply chain disruptions. He said, “We offer modules to a developer for a certain price, but since there are so many hurdles after 15 or 20 days were forced to revise our quotes. This causes a lot of internal challenges for the developers. At least for the next five to six months, developers will have to take a tough decision— although unfavorable— if they need to complete their projects.”

“The energy crisis is expected to remain in China and across the globe for the next one to one and a half years. The power curtailment in China is affecting the entire manufacturing industry. So, solar and other renewables can get a short-term economic benefit and long-term asset appreciation. These hurdles will not hamper the renewable markets but will eventually help a country determined like India to become a major player in the solar space,” Kumar added.

“In the last month, the import cost from China has gone up by 20 -30%, and this is excluding the freight cost. The projects that are competitively bid cannot accommodate these added costs. On top of that, the Goods and Services Tax (GST) hike has become an added burden for the developers. To file a petition on change-in-law and getting a favorable response is a cumbersome process. Also, lenders will not support the developers beyond a level; thus, all the projects will have to wait until the prices come down,” Sood said.

“In the ALMM era, we would look to forge strategic partnerships with two or three suppliers to diversify the risk. This would enable us to become a true partner to these suppliers and get a bang for the buck on modules,” Sood added.

Commenting on the GST hike, Sood said, “Our effective tax rate has gone up from 8.9% to 13.8%, almost an increase of 5%. This increase is fairly substantial at these tariff rates. We are looking forward to the Ministry of Power coming up with the hike in GST to be considered a change-in-law event with direction to all regulators to pass it. We have seen all previous changes-in-law have disrupted the industry. This time the hike is coupled with multiple other hurdles that the industry is already passing through. This 5% on top of an already inflated cost means a lot to developers.”

Click here to view a recording of this panel discussion.