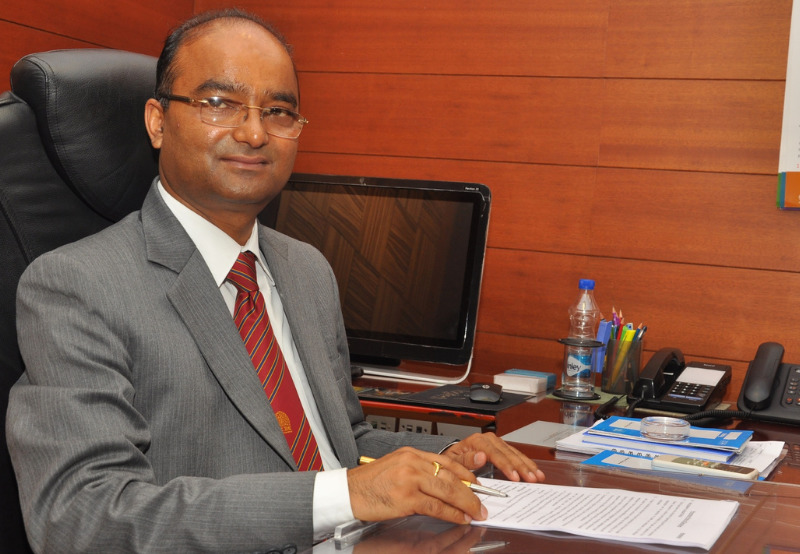 SJVN Limited is a leading hydropower generator in India. It is a joint venture of the government of India and the state government of Himachal Pradesh. The hydropower generator recently forayed into the solar segment and has big plans for the upcoming decade. In an interview with Mercom, the chairperson and managing director (CMD) of SJVN, N.L Sharma, shed light on the company’s recent foray into the solar sector and its upcoming plans to expand its solar portfolio.

What prompted a leading hydro-generator to enter the solar segment?

Presently, SJVN has a total installed capacity of 2015 MW, which includes two hydro projects of 1,912 MW and three renewable projects of 103.2 MW (one solar project of 5.6 MW and two wind projects of 97.6 MW). SJVN’s portfolio favors hydro, and it needs to be optimized by accommodating renewable energy through solar capacity addition.

Further, the gestation period for solar projects is less compared to hydro projects, so there is a great opportunity for SJVN to continue its growth trajectory in the solar sector.

Being a relatively new entrant in the solar business, what is your perception of this segment? Any unique challenges?

There is a huge potential for solar in the next 2-3 decades. SJVN would surely like to grab this opportunity. However, the country’s fast technological advancements and evolving policies have created a cut-throat competition for public sector units (PSU) to survive. The challenges are enormous, but SJVN will adopt strategies to improve its solar-renewable ratio.

Competing with the private sector is a unique challenge for SJVN as a PSU. Therefore, we need certain financial parameters like project IRR (Internal Rate of Return), and equity IRR needs to be ensured above the SJVN Board and Ministry of Power’s minimum limit.

In the Dholera project‘s e-reverse auction, a bidding strategy was devised for bagging the project, ensuring the minimum IRR. This was our maiden bid, and we were successfully allotted the full capacity of 100 MW in Dholera Solar Project at a very attractive tariff of ₹2.80 ($0.037)/kWh.

SJVN previously won a bid for developing a 100 MW solar project in Gujarat’s Raghanesda Solar Park. Has there been any progress on that?

For Dholera, the letter of award (LOA) has been issued, and the identified plots have been allotted to SJVN. The PPA with GUVNL is scheduled to be completed within 90 days from the issue of the LOA. Accordingly, the ISA (Implementation Support Agreement) and land lease agreement are likely to be signed before the end of November.

Further, the Letter of Intent for the EPC work has already been issued to Tata Power, and the LOA will also be issued soon.

For the Raghanesda solar project, the LOA is yet to be issued. However, the tender for EPC has been floated, and the last date for it is November 24, 2020. Since the project has already been bagged by SJVN and the PPA is secured, we expect a very competitive rate for the EPC contract.

Both the solar projects are expected to be commissioned by March 2022, and it would be a big leap in SJVN’s renewable capacity.

SJVN is also looking to acquire operational solar and hydro projects. Can you tell us the strategy behind this move and how many megawatts of solar projects are you planning to acquire?

SJVN has set out a shared vision to enhance its operating capacity to 5,000 MW by 2023, 12,000 MW by 2030, and 25,000 MW by 2040. To realize the first target of 5,000 MW, apart from the portfolio of operational (2015.2 MW) and under construction (2,880 MW) projects, we have chosen to grow inorganically through the acquisition of existing operational, under construction, survey, and investigation hydro and solar projects.

How has 2020 been for your solar business?

Being one of the new entrants in this sector, 2020 has been a fruitful year for SJVN in bagging two solar projects through the competitive tariff mode. SJVN, in a very short period, successfully bagged solar projects of capacity 100 MW each in Dholera Solar Park and Raghanesda Solar Park. The success ratio is 100% as of date, and we are further hopeful of adding another 200-300 MW by the year-end.

What are your plans for solar in the next year?

By the mandate from the board and in the interest of every shareholder, SJVN is exploring the following opportunities in the field of solar:

(a)  Bidding in solar parks

UMREPP will provide a huge opportunity at a large scale, which should help us optimize our cost and deliver power at relatively lower tariffs.

One of the strengths of SJVN is that we can raise debt at a comparatively cheap rate of interest than our competitors, as we have sound financial performance records supported by good credit rating.

Since you operate in both hydro and solar, what policy changes do you wish to see for both these sectors’ progress?

While the central government is trying to push things in a positive direction to attract more investment in the sector, more emphasis is required for upgrading the transmission and distribution network, which will foster the overall growth in this sector.

The evacuation related issues such as non-availability of grids or grids with insufficient capacity is another regulatory challenge faced by power producers. There are many regions across India with great potential for hydro and solar projects. Still, there is no grid connectivity, or the available sub-stations do not have the sufficient capacity to evacuate power. Due to this, open access and evacuation related approvals are not granted by distribution companies leading to huge generation, transmission, and distribution related losses.

So, it is high time that distribution and transmission networks are improved in these regions, especially in states like Himachal Pradesh, Uttarakhand, and Jammu and Kashmir.

Further, for bringing down the electricity price for the consumers, the Ministry of New and Renewable Energy has proposed a draft policy for the supply of round-the-clock (RTC) power to Distribution companies (DISCOMs). The composite single tariff for bundled energy will further bring down the solar tariff.

Similarly, to bring down the hydropower tariff, solar energy should be allowed to be bundled with hydropower. This would firstly ensure the supply of reliable and balanced energy to the grid, and secondly, the hydro projects with long gestation periods should become economically more viable. Presently, the time required for obtaining various clearances (like environment, forest clearances) is substantial.  Bundling is required to be made time-bound to reduce the long gestation period of hydro projects.

Notably, the Ministry of Power recently amended its guidelines for tariff-based competitive bidding for power procurement from round-the-clock power projects to allow them to be bundled with any non-renewable sources of energy rather than just coal-based thermal projects.