The Dubai Electricity and Water Authority (DEWA) and a consortium of Saudi Arabia’s ACWA Power and the Silk Road Fund, which is owned by the Chinese Government, announced the financial closure for a 950 MW solar park project. This would be the fourth phase of the Mohammed bin Rashid Al Maktoum Solar Park.

According to DEWA, the Mohammed bin Rashid Al Maktoum Solar Park is the largest single-site solar park in the world, with a planned capacity of 1,000 MW by 2020, and 5,000 MW by 2030 with investments totaling AED 50 billion ($13 billion).

Recently, this project was announced to have gathered the largest investment for concentrated solar power (CSP) project in the world. The consortium bid at the levelized cost of electricity (LCOE) of $0.073/kWh. In November 2018, DEWA signed an agreement to add 250 MW of solar photovoltaic for the fourth phase of the solar park project, increasing the total capacity of the solar park from 700 MW to 950 MW.

The announcement of the financial closure was made by HE Saeed Mohammed Al Tayer, MD, and CEO of DEWA, and Mohammad Abdullah Abunayyan, chairman of ACWA Power. Al Tayer noted that this would support DEWA’s efforts to increase the share of renewables and clean energy in Dubai and strengthen the UAE’s position as a leading global hub for clean energy and green economy.

“DEWA is implementing the fourth phase of the solar park in cooperation with Saudi Arabia’s ACWA Power and China’s Silk Road Fund. This phase is the largest single-site investment project in the world. It uses both Concentrated Solar Power (CSP) and photovoltaic solar technologies based on the Independent Power Producer (IPP) model with investments up to AED 15.78 billion ($4.30 billion). It will use 700 MW of CSP; 600 MW from a parabolic basin complex and 100 MW from a solar tower; and 250 MW from photovoltaic solar panels. This phase will provide clean energy for 320,000 residences and will reduce 1.6 million tonnes of carbon emissions annually. The project, which will cover an area of 44 square kilometers, achieved several world records. These include the world’s lowest CSP levelized cost of electricity of 0.07 cents per kilowatt-hour and the lowest Levelized Cost of Electricity for photovoltaic technology of 0.024 cents per kilowatt-hour. The project will feature the tallest solar tower in the world at 260 meters and the largest thermal storage capacity of 15 hours; allowing for energy availability round the clock,” said Al Tayer.

As per Al Tayer, 413 MW capacity of solar projects are currently operational in this solar park, DEWA has around 1,550 MW of projects under development. DEWA recently announced the fifth phase of the project which would have a capacity of 900 MW. Mercom reported on DEWA issuing a request for qualification for the development of this solar PV project located within the Mohammed Bin Rashid Al Maktoum Solar Park, about 50 km south of the city of Dubai.

The UAE Energy Strategy 2050 aims to develop an energy mix that focuses on the development of renewable, nuclear and clean energy sources to balance economic requirements and environmental goals. By 2050, the UAE aims to invest AED 600 billion ($163 billion) to meet the growing energy demand and ensure the sustainable growth of the country’s economy. The strategy also aims to increase the efficiency of energy used by individuals and organizations by 40 percent, to achieve savings of AED 700 billion ($190 billion) by 2050.

The Middle East has been extremely active in announcing new renewable energy initiatives.

In November 2018, Mercom reported on the news of ACWA Power achieving financial closure for its 300 MW Sakaka Solar Project in Saudi Arabia.

In February 2019, the Emirates Water and Electricity Company, Abu Dhabi’s state-owned water and electric utility have invited expressions of interest for the development of 2 GW of solar power projects at Al Dafra, 50 kilometers from Abu Dhabi. 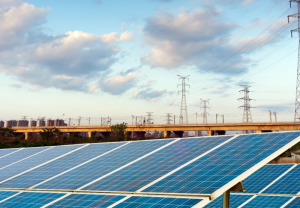