D. E. Shaw Renewable Investments announces the debt and tax equity financing for a 149 MW River Fork solar project in the US 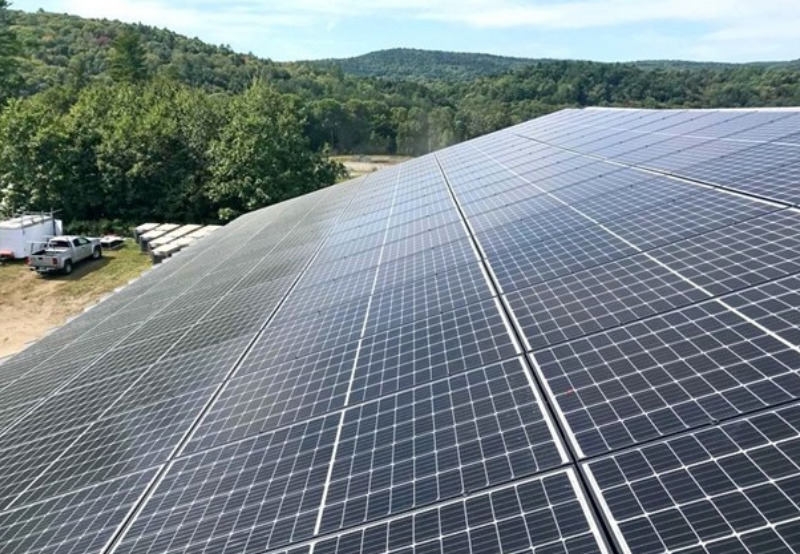 Portuguese energy company Galp agreed to acquire and develop solar projects in Brazil with a combined capacity of 594 MW, moving forward with its renewable expansion ambitions. The acquisition comprises two solar projects under development in the Bahia and Rio Grande do Norte States, with capacities of 282 MWp and 312 MWp, respectively. The projects are set to reach their commercial operation date before 2025.

E. Shaw Renewable Investments (DESRI), an owner and operator of renewable energy projects in North America, announced the closing of debt and tax equity financing for a 149 MW River Fork solar project developed by Ranger Power and is located in Sheridan & Parma Townships, Michigan. The project has a 20-year power purchase agreement for 100 MW with Consumers Energy and a 25-year power purchase agreement for 49 MW with DTE Energy. Financing for the construction of the project was led by the Canadian Imperial Bank of Commerce (CIBC). It included four additional lenders: City National Bank (CNB), National Bank of Canada (NBC), Sumitomo Mitsui Banking Corporation (SMBC), and The Korea Development Bank, alongside a commitment for tax equity financing from Bank of America. Swinerton Renewable Energy will serve as the engineering, procurement, and construction contractor. In addition, SOLV will provide ongoing operations and maintenance services to the facility once operational.

Distributed Solar Development has agreed to acquire a 41.5 MW community solar portfolio across New York and Maryland. The six projects located in New York add up to 32 MWs of solar capacity. Two of these projects will be bolstered with more than 19,700 kWh of energy storage. Sixty percent of the energy generated will go to residents and small businesses, while the remaining 40% will go to commercial and industrial (C&I) offtakers. The New York projects are expected to begin construction in Q1 2022 and reach commercial operation by the end of 2022. The trio of Maryland projects totaling 9.5 MWs, with 100% of the offtake going to residents and small businesses in the local communities. The projects are currently under construction and are expected to reach commercial operation by Q1 2022.

Solar developer, Cypress Creek Renewables, has closed financing for a 270 MW solar project located in Texas. The Shakes solar project in Dimmit County is under construction and is expected to reach commercial operation during the second half of 2022. Cypress Creek will be the long-term owner and operator of the project. Morgan Stanley is the tax equity provider through one of its subsidiaries. Nord/LB, Rabobank, Helaba, and National Bank of Canada provided the project finance debt. The energy and renewable energy credits generated by the project have been sold to Axpo US.

Distributed Solar Development (DSD) has acquired a 4.3 MW ground-mounted community solar project from BQ Energy in Bethel, New York. The project is expected to be operational by late 2022 and generate up to 5,085,864 kWh of clean, renewable energy per year. DSD will provide financing and oversee the construction of the project while also serving as the end-owner.

Encavis Asset Management, a subsidiary of the SDAX-listed solar and wind farm operator Encavis, through Encavis Infrastructure Fund III (EIF III), is acquiring six solar projects in western and southern France totaling 65.5 MW. As part of a joint venture, EIF III 80% of the six solar projects, and 20% remains with the French solar park operator, who has developed and built all six PV ground-mounted systems. Encavis AM takes over the commercial management of the portfolio.

The TPG-backed renewable energy platform Matrix Renewables has signed a new long-term financing agreement with Bancolombia and the Inter-American Development Bank for its Los Llanos portfolio. Located in Puerto Gaitan, in the region of Meta, the Los Llanos portfolio comprises the Bosques Solares de Los Llanos 1, 2 & 3 sites, each with 27 MW of capacity and together with the largest operational Solar PV portfolio in Colombia.

Powertis, a Spanish company dedicated to the development of solar PV projects that belongs to Soltec Power, has completed the agreement signed with Aquila Capital for the joint development of solar PV projects in Italy. Throughout 2021, Powertis has formalized the rotation to Aquila of a total of 523 MW, which, together with the 249 MW that the company transferred in December 2020, reached a capacity of 772 MW. Aquila acquires 51% of the equity of the projects, while 49% remains in possession of Powertis. Aquila also signed a purchase option for the remaining 49% that can be exercised either at RTB (ready to build) or COD (commercial operation date). The transferred project portfolio is being developed by Powertis, and the agreement provides Soltec with certain rights over the supply of the solar trackers to be used in the projects, as well as guaranteeing the contracting of the design and construction works (EPC) of the projects to the Spanish company.

As part of the strategic development partnership with Sunovis, Encavis, wind, and solar park operator is acquiring the Groß Behnitz solar project (Brandenburg), near Berlin, with a generation capacity of 25 MW. The project is currently under construction and is expected to come online by 2022. The electricity generated will be sold directly to a commercial or industrial customer under a long-term power purchase agreement (PPA over ten years).

BVB electricity supply and distribution group Electrica (EL) will buy five companies that own and operate solar PV projects for €35 million (~$40.7 million). The sellers are two companies, MT Project and HiTech Solar Investment, which together own 100% of each of the five target companies. The five companies own and operate solar PV projects with a total installed capacity of 30.95 MWp, respectively, a total operating capacity limited to 28.89 MW. The transaction will be financed from a bridge loan in the amount of up to RON 750 million (~$176.3 million), which Electrica will contract from a consortium of banks formed by Erste Bank and Raiffeisen Bank and from the own funds of the Electrica Group. The five target companies are TCV Impex., ACV Solar Technology, TIS Energy, Delta & Zeta Energy, and Gama & Delta Energy.

Penso Power, the developer of the operational battery storage scheme (the 100 MW Minety project in Wiltshire), has signed a joint venture agreement with BW Group, the global maritime group with interests in shipping, infrastructure, energy, and digital connectivity. The agreement will see BW commit capital to fully fund the build-out of Penso Power’s pipeline of more than 3 GWh of large-scale battery storage projects in the UK over the next 3-5 years, including projects up to 350 MW in connection capacity. Under the agreement, Penso Power and BW Group will become joint shareholders at the battery project level. BW Group will also invest directly into Penso Power to become a significant shareholder. Penso Power was advised by the law firm CMS Cameron McKenna Nabarro Olswang. BW Group was advised by the law firm Bird & Bird.

Fotowatio Renewable Ventures (FRV), part of Abdul Latif Jameel Energy, has closed financing for the Dorset-based Holes Bay battery energy storage project with commercial bank NatWest, which will provide non-recourse financing for a non-contracted revenue model. The Holes Bay plant, which has a capacity of 7.5 MW/15 MWh, can store energy from the UK National Grid to provide flexibility services during the system peak hours, contributing to the network stability and supporting Britain’s decarbonization plan.