Facebook will power all its facilities, including office and data centers, with 100 percent clean and renewable energy by 2020, said the company in a blogpost.

It had earlier set the goal of reaching 50 percent clean and renewable energy use for powering its operations by 2017, which it reached a year early.

The company has adopted a diverse renewable energy approach and customized it according to each market. For example, in Europe, it contracted for the largest wind energy procurement by a corporate customer to support its data centers in Luleå, Sweden, and Odense in Denmark.

In Iowa, it worked with the local utility to add wind energy projects to their portfolio in a way that benefits all utility’s customers while providing power to the data center. Similarly, in Nebraska, it worked with the local utility on a new tariff structure that allows purchasing wind from a brand-new local project. It has also developed different market approaches in the southeast United States that would enable hundreds of megawatts of new solar projects to be developed for its Georgia and Alabama data centres – a region that had previously seen slow solar construction.

“We bring an open and innovative approach to finding renewable energy solutions that can move energy markets forward. Since 2013, we have added over 3 gigawatts of new solar and wind energy to the grids that power our data centers, all while opening those markets for other customers to follow our lead,” said Bobby Hollis, Director of Global Energy at Facebook.

Mercom has often reported about how various multinationals in India are gradually turning to solar power to meet their increasing energy requirements in a self-sustaining manner.

In July 2018, Walmart India, a wholly-owned subsidiary of Walmart Inc, said it is planning to incorporate sustainable sources such as solar energy, water harvesting, and recycling to run its stores in the country.

Earlier, Infosys, India’s software multinational giant, had announced that it has developed a total capacity of 46.1 MW of rooftop and ground-mounted solar projects across the country.

Infosys like Facebook is a member of RE100, a global initiative by companies committed to use 100 percent renewable energy.

Recently, Mercom reported that Amazon India, a global e-commerce giant, will set up 8,000 kW of rooftop solar installations by the end of this year at its fulfillment centers and sorting facilities across the country. This initiative in India is a part of Amazon’s global vision to power 50 of its fulfillment and sorting centers with solar energy by the end of 2020. It has already installed 1,600 kW of solar panels at its centers in Delhi and Hyderabad.

In March 2018, Microsoft announced the completion of its first renewable energy deal in India. Under the agreement, the company will purchase 3 MW of solar-power from Atria Power for its new office building in Karnataka’s capital city, Bengaluru. It will meet 80 percent of the projected electricity needs through this energy purchase.

India plans to achieve 40 GW of rooftop solar as part of its broader goal of achieving 100 GW of solar capacity across the country by 2022.

According to the Mercom India Solar Project Tracker, India has an installed capacity of ~2 GW of solar rooftop installations as of March 2018. 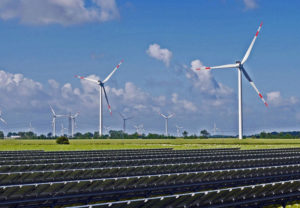 Facebook Ties Up with CleanMax to Source 100% Renewable Power 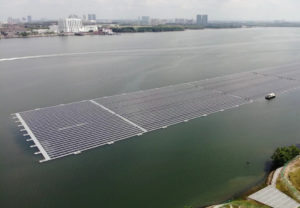 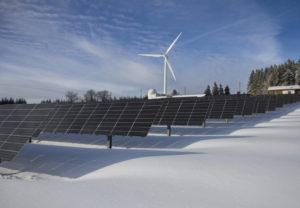