In the interview, Chemtrols Solar CEO recommends the government set up policy framework and let market forces do the rest

In line with the government’s ambitious renewable energy targets, India has seen an impressive increase in the rate at which these energy sources are being tapped for utilization. But given the intermittent supply of renewable energy sources, it is also of strategic importance to give due consideration to the need for energy storage to stabilize the grid as the use of renewables rises.

“In the coming year, the battery energy storage system market will boom,” said Sharad Saxena, chief executive officer of Chemtrols Solar. Saxena spoke with the Mercom about various issues ranging from the anti-dumping investigation to the inadequacies of the country’s renewable energy targets. Here are the excerpts from the interview:

What do you think of the Indian solar sector in the light of current developments like the anti-dumping investigation (ADD) and the Goods and Services Tax (GST)?

At present, the Indian solar sector is going through a lot of uncertainty, both commercially as well as technologically. Some of the commercial issues are the ongoing ADD investigation, GST, and the increase in the customs duty for solar modules at ports caused by misclassification. The technological issue that the solar sector is presently grappling with is the government’s creation of policies pertaining to standards in the absence of enough good laboratories to carry out the necessary quality checks and issue certifications.

All of these issues compound to create a feeling of uncertainty for engineering, procurement, and construction (EPC) players like us. When we make an offer to a client, we do not really know how to give them competitive pricing with these factors in mind.

Because of these problems, clients also tend to delay procurement and contracting as they want these issues to blow over. They think they can get a better deal once these uncertainties are resolved.

I hope that the anti-dumping investigation comes to an end soon and the ADD to be levied or not to be levied is decided. If this does not happen, there will be a huge delay in project commissioning.

When the GST regime came into play, there was uncertainty regarding the rates for various solar project components and equipment. Now, the uncertainty is regarding the refund of the GST caused by the inverted duty structure. There is no clarity on when the difference will be paid.

All EPC companies have an inverted GST structure. We pay more GST while buying, and charge less when we sell the system to our clients. The difference is to be refunded by the government, but there is ambiguity surrounding the time-frame for the refund.

This further adds to the plethora of uncertainties that are already plaguing the solar sector.

What must the government do for the betterment of the solar sector?

The government must let market forces take care of the growth. The government should act only as a regulatory body and formulate the required policies to ensure quality. This is all that is required for the sector’s betterment.

I also believe the government should stop subsidies as soon as possible. Once the subsidies disappear, competition will ensure the growth of the sector and there would be no confusion in the minds of the investors regarding the eligibility for subsidies.

Which do you think are the best states or union territories for solar in India?

We have a pan-India presence. We have projects in 13 states across the country. In my opinion, the southern states of Andhra Pradesh, Tamil Nadu, Telangana, and Karnataka are the best when it comes to ease of solar project construction. The policies are more conducive in these states.

What is your take on solar financing in India?

The existence of numerous non-performing assets has made banks quite cautious while lending. In general, there has been a slowdown in the country when it comes to lending and this in turn has affected the already-suffering solar sector.

Also, banks are not very experienced in lending to renewable energy generating projects. This is reminiscent of the situation in Europe (especially in Germany) during the nascent stages of their solar revolution. Banks have always taken some time to cozy up to this relatively new sector of renewable energy.

Lending to solar projects in India has only increased considerably in the last three or four years.

As of now, only the Indian Renewable Energy Development Agency (IREDA) lends specifically to the renewable energy sector.

What do you think about the government’s plan to establish ultra-mega solar parks?

The government has, of late, become quite interested in developing ultra-mega solar parks in order to achieve the target of 100GW by 2022.  In my opinion, using a centralized approach may have its benefits of economies of scale but defeats the basic ability of a Solar PV system to be decentralized – ‘generate where required.’  When large projects are developed to supply power elsewhere, there are considerable transmission losses involved.

Instead, the focus should be on developing a large number of small solar projects. This will reduce transmission losses and bring down the cost of power. Solar is a decentralized form of power. The idea should be to embark on the best possible path to exact the true solar potential of India and not to merely complete a certain MW or GW of solar projects by a certain date.

What are your thoughts on battery energy storage systems?

Energy storage is a thing of the future, the very near future. One year from now, there will be a huge requirement for energy storage. The amount of renewable energy that will be fed into the grid will destabilize it, creating issues that will have countrywide repercussions Energy storage is a pre-requisite for grid stability.

In remote areas such as Lakshadweep, Andaman and Nicobar, and Ladakh, energy storage will be needed along with Solar PV Power Plants to provide a continuous supply of electricity. 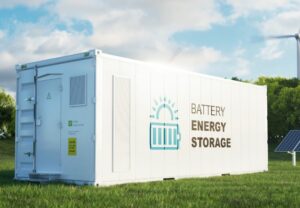